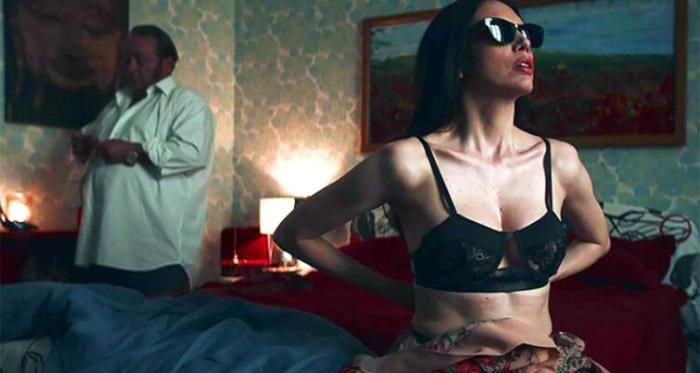 Fantasia Review: Dario Argento Is Back to Giallo With ‘Dark Glasses’

Ten years after the panned Dracula 3D, Dario Argento is back to his giallo roots with Dark Glasses. There’s a familiar structure in his script, co-written with Franco Ferrini, that includes violent bloodletting and a psychopathic killer who stalks and butchers women. In this case, the woman he stalks is a blind prostitute. It’s the kind of narrative Argento is known for — he loves a good murder and we love the suspense he creates. Unfortunately, Dark Glasses ends up being a mixed bag; Argento sticking to what he knows best proves to be both good and bad.

What’s immediately noticed is Arnaud Rebotini’s quiet and dark synth score, which sounds to be using the same synthesized combination of instruments that John Carpenter used for Halloween. It sets the perfect mood for a film where a serial killer is on the hunt, cutting the throat of a young, beautiful woman brutally with a wire. Blood pours from her neck as the camera closes in on the gaping wound — Argento still wants to make us squirm. The killer’s victim was a prostitute, and he quickly sets his sights on another named Diana (Ilenia Pastorelli). She’s mysterious and forlorn with a clear distaste for men. While unafraid to kick them in the balls if they get too handsy, she’s also aware of the dangers that come with her line of work. She shows fear, which only escalates when she begins to be pursued by a white van with the serial killer at the wheel. A gripping car chase ensues, resulting in Diana colliding with another vehicle. She escapes with her life but loses her eyesight. Recalling films like Terence Young’s Wait Until Dark and Randall Okita’s See For Me, she must learn to navigate through the darkness to hopefully make it out alive.

Pastorelli is fantastic in the role of Diana. While Argento’s giallo prowess is certainly the film’s initial draw, what ends up being its most interesting aspect is the main character. It’s engaging to watch Diana adjust to a new life without sight and adapt to an environment now shrouded in blackness. It’s also an excellent touch to see this process happen slowly, and with an instructor, Rita (Asia Argento), who helps guide Diana as she learns to guide herself. Through this, the film also puts a face to sex workers with disabilities who are often ignored or viewed as people to be rescued. While Pastorelli masterfully conveys the upset anyone would feel after such an accident, she also conveys great strength. You’re unsure about Diana at first, but through her bravery and likeability, the audience is drawn right into her frightening situation. Diana also suffers from immense guilt over the death of a couple who were in the car she collided with. That’s how she meets the orphaned Chin (Andrea Zhang). They form a sweet relationship; Chin helps Diana overcome the loneliness of darkness, while she helps him overcome the loneliness of grief.

As already highlighted, the score is what’s immediately noticeable. However, while it does establish tone, it’s overused and takes away from the intended suspense. It also just sounds too much like Halloween, but perhaps Argento was trying to recreate the fear that comes from Michael Myers walking towards his victim with that signature theme, but the killer in Dark Glasses really isn’t worthy of the same treatment. For one, he’s rarely seen. He could be a figment of Diana’s imagination because of how often he seems to be just a lingering thought. Never having him do much stalking takes away from the suspense, too, and also the stakes.

When it comes to the kills, Argento seems to have transported himself back to the 1970s. The murder scenes are theatrical and exaggerated in execution, including the kind of dramatic falling by someone being chased that’s present in most old slashers. It’s a bloody execution with a weird mix of tone that makes you question if all the cheese and humor are intentional. Is he embracing the camp of his films? Or is he unaware of how to execute these scenes in a way that wouldn’t seem ridiculous to a modern audience? This giallo also lacks the genre’s use of explicit sex. While this is a film all about sex, it’s never shown. Maybe a wise choice, as perhaps Argento acknowledges that the way he would have filmed these scenes is now best left on the shelf.

As the third act proves, though, Argento continues to be a master of horror and suspense (when the score doesn’t get in the way), with many satisfying “Oh shit!” moments. His old ways may not translate as well as they once did, but every new Argento release is an exciting event to partake in.