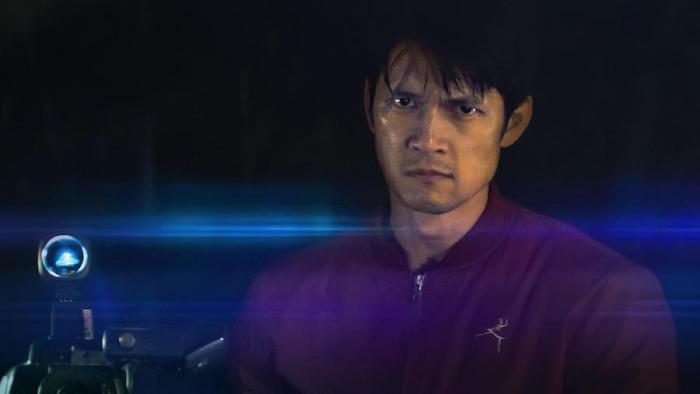 Review: 'Broadcast Signal Intrusion' Is An Unreliable Mystery That Will Leave You Questioning... Well, Everything

“You spend so long looking for answers that you forget the f**king question.”

OK, so I’m pretty sure I butchered the quote, but that’s the gist of what Alice (Kelley Mack) tells James (Harry Shum Jr.) late in Broadcast Signal Intrusion, a noir-ish psychological thriller about one man’s pursuit of a conspiracy that hits a little too close to home. What makes this descent down the proverbial rabbit hole a little different from others, though, is precisely how subjective the journey itself becomes. This is not a mystery that barrels toward a single inescapable conclusion. There’s AN answer to be found in the film’s climax, but perhaps not THE answer. It all depends on what question James is really asking — and what questions he chooses to ignore along the way.

In 1999, James is an archivist who spends his nights duping old broadcast tapes onto DVD to save shelf space. On one such tape he catches sight of a mysterious pirate broadcast that briefly interrupted the nightly news in 1987. It’s a creepy vignette featuring a stranger in a rubbery mask. That, on its own, was curious enough to catch his interest. Through message boards, he learns that it was inspired by an old sitcom and that the pirates were never caught. In fact, what he saw was only the first in a series of such interruptions. He checks the archives, only to find that the tape of the next incident was seized by the FCC years ago. Odder and odder.

As for James himself, we don’t know much about him at the start. He’s a loner. He fixes cameras in his spare time. He attends a grief support group, and he only places phone calls through telephone booths. On the surface, he seems like a man that could use a distraction. However, when he learns that each of these pirate broadcasts happened to coincide with a report of a missing woman, he becomes obsessed. As he unravels the mystery of the broadcasts, the mystery of James also unspools. And wouldn’t you know, there’s rumors of a third pirate broadcast from 1996, just a day after his wife Hannah went missing. James is hooked, but he isn’t trying to solve the mystery of the pirate broadcasts at all. He’s trying to find out what happened to his wife. Or maybe he’s just looking for someone to blame.

At first, I wanted to compare Broadcast Signal Intrusion to other mystery-to-madness tales like Angel Heart or Videodrome, but those aren’t really fair comparisons. They are stories where the impossible ultimately is real, and where the truth is a trap set to ensnare the main character. In Broadcast Signal Intrusion, there is nothing supernatural at play, despite the heaps of coincidences and creepy mood that permeates this story. James is never doomed by his discoveries. I don’t even know why I bring those other movies up, except that they were in my mind while I watched this one, and in a sense they informed my expectations that there would be a single disastrous-yet-undeniable solution to this mystery. Expectations I jettisoned when I realized I needed to question the veracity of James’s journey instead. The trail of breadcrumbs that James follows is riddled with inconsistencies, from benefactors with shadowy motives that he accepts without hesitation to perfectly plausible explanations that he rejects because they don’t fit his preconceived narrative. Alice, the woman I mentioned at the top, starts out stalking James, claiming that following strangers is simply her “hobby.” Then, she becomes his partner in the investigation. Instead of questioning how she came to follow him, and why she’s willing to get involved with him, he gladly accepts the clues she so easily deciphers for him. And when she later goes missing herself, he assumes she’s another victim of the pirates. But could she have been on their side all along? We never know for sure. To put it simply, James doesn’t follow the facts. He follows his own confirmation bias. And the deeper down the rabbit hole he goes, the more the film telegraphs just how unreliable his judgement may be.

It’s subtle, the way the director Jacob Gentry (Synchronicity) captures James moving through his life in almost Wes Anderson-esque symmetrical framing, only to have the camera slowly fall askew and grow shaky as the plot spins out of control. Then, there’s the script, from writers Phil Drinkwater and Tim Woodall, which takes its time backfilling details about James that include hints of paranoia that pre-date his discovery of the pirate broadcast. He seems reliable, until he doesn’t. Even Shum, playing an isolated man who gives so little of himself away, does a phenomenal job within those boundaries. Most people will remember him as the resident dancer on Glee (though hopefully that will change when he takes a lead role in the upcoming Crazy Rich Asians sequel), and it’s remarkable how he harnesses his physicality here to express so much beyond what’s graceful. His James may not be a dancer, but the way he folds in on himself, hunches and squints and stiffens and shuffles, tells you so much about the character’s slide from detachment to obsession in the deltas where there’s little opportunity for dialogue. The movie may take its time casting doubt on whether or not James is a reliable figure, but Shum does all the heavy lifting to make you trust him from the get go.

There are a lot of details that don’t add up, clues that seem tenuous at best, or fortuitously turn up at just the right time, even jarring events that seem as though they could only have occurred in James’s mind. Then, there are the details — the sort of big smoking gun “a-HA” stuff — that are curiously absent. All of which isn’t to say that the solution he arrives at is the wrong one, necessarily. There is ample reason that we, as viewers, should question whether it’s the right one.

To get all film school nerd for a sec, one of the foundational ideas of Soviet montage theory was the Kuleshov effect, which basically asserts that the order of images in a film gives it meaning — or rather, that the audience will interpret those images differently based on how they are ordered. The act of viewing is the act of inferring a story out of parts. Even dating back to the oral tradition, it’s human nature to construct stories for ourselves, to prescribe meaning and makes sense of a senseless world. Randomness, coincidence — those are akin to meaninglessness, and nobody wants to believe that death or their own grief is meaningless. James too is taking these clues, the breadcrumbs, these parts and assembling them to find meaning. It’s just that the meaning he wants to find has to end in vengeance, and there are so many unanswered questions he discards along the way to get it.

The thing is, maybe I’m guilty of the exact same thing. I’m sitting here trying to ascribe meaning to what very well could be unintentional plot holes and unnecessary deus ex machina, desperate to justify Broadcast Signal Intrusion’s shaky mystery as deliberate! Am I focusing on the wrong parts and only embracing the ones that support my reading? Am I also biased, simply because I enjoyed this strange trip and want it to mean something? Man, I dunno. But I’ll tell you what: If you watch the movie, clock how you feel when you get to that ending. Do you feel satisfied or do you feel uneasy, as if something is… missing? Because if you’re like me, and you spend the rest of the day pondering the pit it left in your stomach, then you also might want to believe the movie did it intentionally. If it’s deliberate, then it’s impressive! And if it isn’t? Well… then it was all just meaningless.

Broadcast Signal Intrusion is available on VOD and in a limited number of theaters.


← It's Weird That They Rebooted 'Head Of the Class,' Isn't It? | [Spoilers] 'You' Season Three on Netflix Got Its Ending All Wrong →