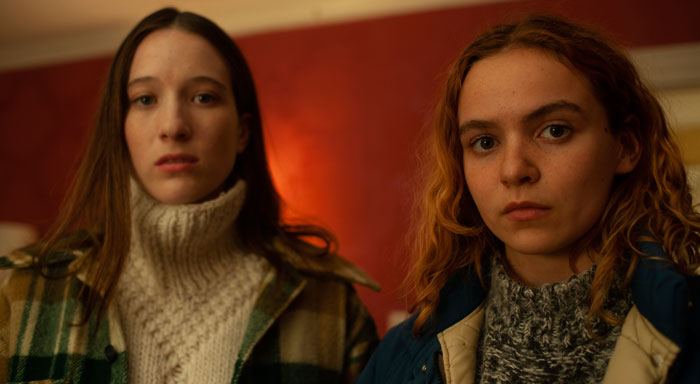 Review: 'Blow the Man Down' Offers A Maine-Set Mafia Thriller About Fishmongers, Matriarchs, And A Mad Madam

When we think of mafia movies, what comes to mind are images of swarthy men in slick suits, brandishing guns or at the very least sneers amid the gritty streets and back alleys of an urban hellscape of money, crime, and corruption. We’re not imagining scowling grandmothers strolling through the quiet streets of a cozy fishing port on the coast of Maine. We’re expecting Robert De Niro and Al Pacino, not Margot Martindale and June Squibb. But all of these unexpected elements are part of what makes the new-to-streaming crime-thriller Blow The Man Down an inspired re-invention of the genre and an absolute must-see.

Co-written snd co-directed by Bridget Savage Cole and Danielle Krudy, Blow The Man Down centers on two young women in terrible trouble. In the wake of their mother’s death after a protracted illness, sisters Priscilla and Mary Beth Connolly (Sophie Lowe and Morgan Saylor) are at odds on what to do next. Dedicated to their hometown and mother’s legacy, Pris is desperate to save the flailing fishmonger business they’ve inherited. However, Mary Beth is aching to escape the limits of this “shitty town.” Her frustration spins into a drunken night where one bad choice leads to one very bad man, who has fresh bloodstains in his car trunk. Mary Beth will survive the night, but she’ll need her sister’s help—and skills with a knife—to dispose of the body.

This murder’s clumsy cover-up is just this film’s inciting incident, or rather the hook that catches our interest. What tugs audiences deeper and deeper into the cold and captivating world of this crime thriller is the B-plot that pits rightly revered character actress Margo Martindale against Oscar-nominee June Squibb.

The Connolly girls don’t realize their mother was a major player in a power struggle between Enid, a local madam whose “bed and breakfast” is actually a brothel, and a trio of retired grandmothers (Squibb, Annette O’Toole, and Marceline Hugot), who are essentially the Godfather of this fishing town. At first glance, Susie, Gail, and Doreen might seem like rosy-cheeked Golden Girls, friendly and sweet. However, the longer you look, you realize their faces are weather-worn, their smiles sharp, and their stern expressions warn they’ll suffer no foolishness. These three don’t miss a thing at Easter Cove. They know about Enid’s operation. They know about the strange traffic accident involving a Paul Bunyan standee, and they know about the body that’s washed ashore. Haplessly, the Connollys get caught up in this turf war. While Lowe and Saylor bring an aching earnestness to the sisters’ arcs, they are outshone by these dynamic dames who serve their dark propositions with a cup of tea and a slice of cake. Seriously.

In pastel cardigans and floral kerchiefs, these women don’t look like the mafia dons and made men we typically see face off in crime thrillers. They prefer knitting to smoking stogies, and hair salons to strip clubs for doing business. Yet they are masterfully manipulative and menacing, playing the chuckling Sherrif (Skipp Sudduth), his pretty-boy protege (Will Brittain), of a suspicious sex-worker (Gayle Rankin) like a casual game of bridge. While the whole of this unfurling story is fun and fascinating, the very best scenes come when Martindale comes face-to-face with a threat to Enid’s operation. In my favorite, the snooty trio traps her in her dryer chair while she waits for her cut-and-color to be completed. As they sling thinly-veiled threats with an “I’d like to see your manager” sternness, Enid snarks coolly, “Careful, Gail, you’ll make your frown lines worse.”

There’s a cheeky lunacy in all this, that in a town of bad men and macho men, the residents you shouldn’t mess with are the little old ladies. Cole and Krudy lean in, doubling down with gallows humor that’s bold and hilarious. The pair have a marvelous sense of comedic timing and punctuation that makes frantically shoving a body into a cooler as guffaw-inducing as the crisp click of a dryer switching off, or an overwhelmed sister sputtering, “F*cking coleslaw.” Then, there’s the Greek chorus of fishermen, who belt out sailor shanties with a wink—metaphorical and literal! I realize this may not make sense now, but it will if you give this outrageous film a chance.

All in all, Blow The Man Down is salty, savage, and sensational, offering a dark tale with a suitably subversive wit as pointed as a harpoon.

Blow The Man Down is now on Prime Video.

← Review: Stream Ava DuVernay's Netflix Hidden Gems 'Burning Cane' and 'The Body Remembers When the World Broke Open' | How Are You Coping With Social Distancing and a 'Stay at Home' Order (If You Have One?) →