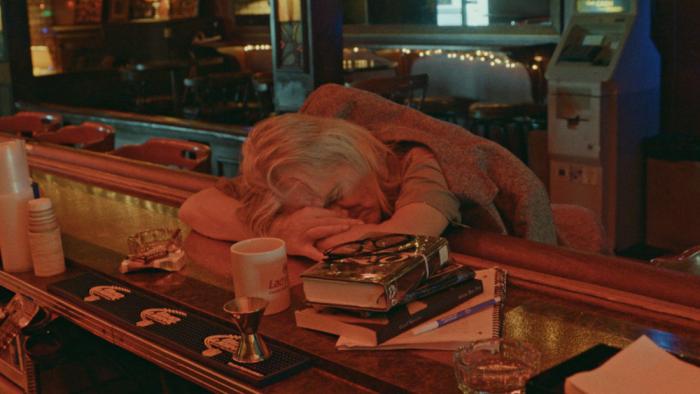 Review: 'Bloody Nose, Empty Pockets' Is For Anyone Who Misses Dive Bars

If you’re feeling nostalgic for the carefree days when you could wander into a random bar, sidle up to a stool, order a drink, and overhear a handful of curious conversations and fevered debates, Bloody Nose, Empty Pockets is for you. This intoxicating doc takes audiences back to The Roaring 20s, a dive bar in Las Vegas that had a camera crew capture its closing day.

Co-directors/brothers, Bill and Turner Ross, turn their lenses on those who come through the doors on this day of celebration and sadness. An array of barflies buzz about getting drunk, waxing philosophical, flirting with disaster and each other as the hours fly by. There’s an old man dressed in an oblivious Minions cosplay, a bright yellow shirt under baggy denim overalls, who pulls playful pranks with a crooked smile. There’s a smirking sex worker who notes she’s easiest to reach on Facebook nowadays. An Aussie ex-patriot rolls in with a gift of donuts before asking if he can shed his pants. A crumpled man in a rumpled suit tries to give a speech from scribbled notecards but slurs too much to secure the spotlight from this cavalcade of big personalities.

Bloody Nose, Empty Pockets nestles its cameras among these people, who are tattered, tired, and thirsty for the relief of a good time. We are made witness to snatches of conversation about politics, romance, and regrets. These are the kinds of talks many of us have had in hazy drunken nights, whispered over well drinks, the kind that become half-forgotten phantoms of a lost night that leaves you with a wicked hangover.

Naturally, there are some solid one-liners born from such exchanges. For instance, the morning bartender who watches news reports about small local shops being pushed out by Vegas gentrification, and spits with disdain, “Fucking Celine Dion. She can have it. I’m moving.” Later, a defiant party girl calls out for a drink, proclaiming, “You think I’m better than Fireball? I’m not!” Then, there’s Michael, a haggard old man who wakes up in the bar and will sleep there this final night. After scraping the beard from his face with brusque swipes of a cheap razor over the bar’s bathroom sink, he lumbers back to his seat, and declares for the small crowd and the cameras, “I pride myself that I didn’t become an alcoholic until after I was a failure.” To be an alcoholic failure is a cliché, Michael says. He may be an alcoholic and a failure, but he is no cliché.

There’s a perverse pride to Michael’s declaration, and this informs the rest of Bloody Nose, Empty Pockets. Those who share their heartache, their mistakes, and a flash of impressively perky 60-year-old tits know who they are. They want you to know too. It’s easy to imagine a version of this movie that would feel like soulless prohibition propaganda, where the motley crew here would be condemned for the messes they make in the bar and of their lives. But what shines at the core of this film is the humanity of these people. Amid the caterwauling and clumsy seductions, there are aching vulnerabilities on display along with a throbbing yearning to be seen, heard, and accepted. The glorious theme song of Cheers sang of a bar where everyone knew your name, promising an instant camaraderie. In the Roaring ’20s, the Rosses capture the truth of such camaraderie without playing down the addictions and traumas that make such acceptance essential.

Through mindful editing, the Ross Brothers carved from a flurry of footage a string of arcs about a homeless alcoholic with a heart of gold, a heartsick musician with a doomed crush, a warm but weary bartender determined to urge her teen son away from following in the footsteps of her crushed customers. Their cameras captured every nook and cranny of this crusty but beloved bar to the point where I could smell the spilled beer and stale cigarette smoke. As someone who hasn’t been to a bar in months, this sense memory had me swooning, vividly recalling the joys and frustrations of such dank yet divine corners.

By the end of the film, I was ready to proclaim Bloody Nose, Empty Pockets one of the best documentaries of the year. But there’s a wrinkle there. While this film premiered in the doc section of the Sundance Film Festival, it’s not strictly a documentary. That categorization was a call made by the fest’s programmers, not the filmmakers, who’d carefully hired non-actors they’d met at various bars to come together and create an improvised drama. The Roaring ’20s isn’t a Vegas bar that closed, it’s New Orleans bar that the brothers rented for a day to make a slice-of-life omnibus about those that society is all too happy to overlook.

The lines of “documentary” are blurred here. The setup—a bar’s last day being crowded by its longtime customers—is a narrative framework that is fictitious. But how much of what the film’s performers came from a real place? How many stories shared were true? And does it matter?

The Ross brothers sought out real people who could connect to what it means to have a bar that feels like home. When they turned up for the shoot, their cast wasn’t given scripts, just the direction to be themselves. From this, Bloody Nose, Empty Pockets was born.

Singing a song of outcasts, drunks, and failures, this film—however you choose to categorize it—invites audiences into the fold, tenderly tugging us into earnest debates, urging us to drink in the stories, guzzle down the atmosphere, and swallow the hard-won lessons found at the bottom of a bottle. For all this, Bloody Nose, Empty Pockets may well be one of the best docs of the year.

Bloody Nose, Empty Pockets will have special virtual event screenings on July 8, National Dive Bar Day, with proceeds benefiting the USBF’s COVID-19 Bartender Emergency Relief Fund. Its official virtual run will begin through Film At Lincoln Center on July 10 with further rollout to follow. To learn how you can watch the doc, click here.

← Step Aside, Kumail's Pecs, Here Comes Hayley Atwell's Shredded Back | What Is the Last Movie You Saw in a Movie Theater? →