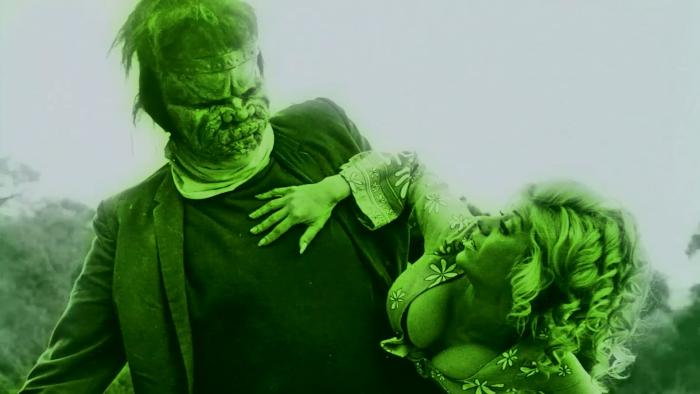 Review: 'Blood & Flesh' Is 'The Kid Stays In The Picture' With B-Movies, Murder, And Aliens, Because Sure Why Not

Even die-hard horror fans might not know the name of Al Adamson. Though he made dozens of films over the course of his career, the B-movie tycoon never garned much acclaim or respect. Even in the documentary about him, interview subjects scoff at the idea this guy made good movies. Some might even make the grave observation that Adamson’s gruesome death earned him more fame than his life’s work ever had. And Blood & Flesh: The Reel Life & Ghastly Death of Al Adamson explores it all with earnest enthusiasm and an insatiable thirst for the outrageous behind-the-scenes stories of this unique filmmaker.

Directed by David Gregory, Blood & Flesh: The Reel Life & Ghastly Death of Al Adamson is kind of like The Kid Stays In the Picture for the B-movie crowd. Like producer Robert Evans, Adamson got his start as an actor, has wild stories that involve plenty of name-dropping, and shapes his own narrative with cheeky, revealing interviews. The first hour of Blood & Flesh is a rollicking romp through the ’60s-’70s B-movie-making, where Adamson would regularly and ruthlessly reshoot to mercenarily wedge in trendier selling points. A spy movie meant to capitalize on the popularity of James Bond might throw in some Easy Rider-inspired bikers, transforming from a counterfeiting thriller called Fakers to a Nazi-biker action flick called Hell’s Bloody Devils. Similarly, an underwhelming sci-fi flick could be easily recut into the ultimate monster grudge-match. Just add a sloppy rubber mask and a caped, bewildered and blinking stockbroker to create Dracula vs. Frankenstein (pictured above).

Those interested in film history will marvel at how the drive-in and grindhouse scene functioned in this eccentric era before Jaws changed the game by inventing the blockbuster. It was a time when these movies were sold chiefly by scandalous posters and bonkers titles. The actual content or how it connected to the promo materials be damned! Adamson wasn’t a genius as a filmmaker, but he was a brilliant businessman. And there’s plenty of anecdotes that are as revealing as they are jaw-dropping and guffaw-sparking. For instance, he scored free catering for one shoot by promising Colonel Sanders a cameo in the film! He turned a soft-core flick called Naughty Stewardesses even naughtier by hiring body doubles to bring in some added nudity. But Adamson didn’t bring in just any actresses or porn stars for this racy reshoot. Instead, he used the Manson Girls. Yeah. The Manson Girls, and just weeks before they’d be arrested for the infamous Manson Family murders!

Gregory’s giddy astonishment for Adamson’s story is expressed in a panoply of colorful interviews from loved ones and former colleagues, including acclaimed cinematographer Vilmos Zsigmond (Close Encounters of the Third Kind). They might share some of the shadier details of Adamson’s success, like how his preferred method of payment was none and how he recurringly crossed the line from scrappy filmmaker to con-man. But overall, they share a warm nostalgia for Adamson’s “let’s put on a show” attitude. This makes it easy to understand how Adamson was able to cajole a slew of over-the-hills Hollywood stars to appear in his films, including John Carradine, Russ Tamblyn, and Lon Chaney Jr. And there’s an intriguing discussion of whether such casting was exploitative or compassionate. Was Adamson trying to crassly capitalize on their names? Was he looking to give these older actors—who were being pushed out of Hollywood—one last gasp as stardom? Was it both? Regrettably, beyond this brief debate, Gregory has no interest in exploring the ethics of Adamson’s ways. And indeed, there’s little time for that as the showbiz section of the doc is breathlessly, relentlessly paced to cram all the details in.

To his credit, Gregory has a lot of ground to cover. Adamson’s story and films are not widely known. So the first hour has a great deal of setup to do before he can get into the outlandish adventures of his fascinating subject. Things slow down once Blood & Flesh hits the decline of Adamson’s personal and professional life, including his mysterious (and unfinished) documentary about extraterrestrials. A former girlfriend and Adamson’s long-time best friend get vague and eerie when discussing how the filmmaker went from a skeptic to a believer. But the alien stuff feels almost like an afterthought. Which honestly, might be a fitting tribute to Adamson’s legacy. After all, aliens are an additional selling point beyond “showbiz stories” and “true-crime,” which is where the film finished and runs out of steam.

After detailing the frenzy and fun of his filmmaking days and the spooky allure of his alien investigation, Blood & Flesh: The Reel Life & Ghastly Death of Al Adamson shifts to the horrid murder teased in its title and its zippy opening. Jarringly, the tone shifts abruptly from mirthful to mournful, leaning heavily into a tearful interview with Adamson’s housekeeper, who was witness to his final days. In the terrain of true-crime, Gregory seems uncertain how to proceed. He rejects making a mystery of who killed Adamson, introducing the prime suspect quickly and frankly. He rejects the tropes of trashy true crime shows that might relish in the gory details with graphic crime-scene photos, re-enactments with glow-up version of the victim, or any excuse to work in titillating T&A or onscreen violence. Instead, he shows archival news footage, which reveals how the media relished in the ghoulish details of Adamson’s death, drawing comparisons to the gore present in his own movies, while insensitively suggesting his killing was some sort of “reap what you sew scenario.”

Gregory’s approach is to stick to the facts as presented by witnesses, including the detective who unearthed Adamson’s hidden corpse. There’s a stern solemnity to this section, which strives for respectful but feels strange in conjunction with all that’s come before. Perhaps a more exploitative take on his final chapter would have been tacky. But after reveling in Adamson’s spirit and irreverence for so much of the runtime, this final chapter feels strangely restrained and lifeless. Still, it’s hard to say if a more Adamson approach wouldn’t have been shocking in the wrong way.

Regardless, Blood & Flesh: The Reel Life & Ghastly Death of Al Adamson is a wild-ass ride through the sleaze, sex, scandals, and shenanigans of a unique era of B-movie making. It’s 70% showbiz doc, 10% conspiracy theories, 20% crime doc, and 100% a deranged delight. Whether you’re a sucker for film history, horror, or twisted true crime tales, you’ll want to seek this one out.

Blood & Flesh: The Reel Life & Ghastly Death of Al Adamson made its world premiere at the Fantasia International Film Festival on July 16.

Joe Biden Is Right About One Thing, God Help Us