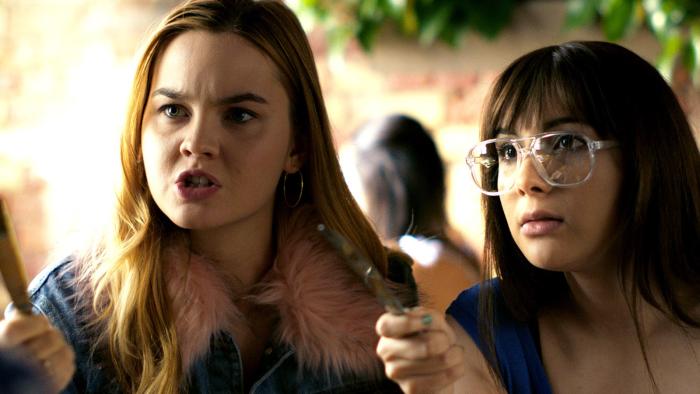 Netflix Review: 'Banana Split' Is A Sisters Before Misters Tale Of Love and Friendship

Stomping in the footsteps of such fantastic comedies as For A Good Time Call and The Edge of Seventeen comes Banana Split, a salty and outrageous film about female friendship and first love. Written by Hannah Marks and Joey Power, this Los Angeles-set story begins in junior year, where snarky tomboy April (Marks) begins dating her long-time friend Nick (Dylan Sprouse). Their relationship blazes by in a montage of make-out sessions, pet names, stoned silliness, and beach sex before spinning into public fights, pouting prom nights, and a crushing break-up in graduation gowns. Counting down to her college orientation at Boston University, April has the whole summer gaping before her with only her gibbering gal pals and crap job at a movie theater to sustain her. That is until she meets Clara (Liana Liberato).

Clara is Nick’s new girlfriend, and she’s the worst in that she’s “classically pretty,” with “good boobs,” great hair, and the kind of unshakeable confidence that allows her to pee outside without blushing. While April favors vintage tees and hoodies, Clara looks like a model in yoga pants and skimpy red dresses. April is ready and very willing to hate Clara on sight, but this new-to-town romantic rival is too damn charming to stay mad. Over some DIY karaoke and underage shots at a house party, the two girls discover they have a lot in common when it comes to music and sense of humor. But how can they be friends when one is dating the other’s ex? Three rules: Don’t tell Nick. Don’t talk about Nick. No social media posts about their hangs. In secret, their friendship blossoms, but the ache of jealousy threatens to break hearts and tear them apart.

Directed by Benjamin Kasulke, Banana Split is a smart-mouthed romp through a wild summer of subterfuge and sisterhood. April and Clara quickly escalate from texting to road trips, drug trips, and shared-bed sleepovers. Sure, sometimes April’s anxieties give her visions of a devil horned Clara or a nefarious Nick mocking her flustered heart, but mostly these two just have fun together, whether they’re sharing fries or taking their birth control as a twinsies activity. With jaunty montages and sparking comedy set pieces, Kasulke keeps the pace at an ecstatic tumble that makes Banana Split a real treat. The snappy banter scripted by Power and Marks slathers the whole thing in a delicious verve, while cast being absolutely pitch-perfect in moments of angst and joy is the cherry on top.

Marks has written herself the kind of role that should make Hailee Steinfeld shake in her boots. Like imagine if Emma Stone co-wrote Easy A, that’s the kind of talent Marks is sparking here. She’s got an undeniable screen presence that allows her to make d*ck jokes and be a d*ck without losing the audience’s empathy and interest. She’s got the comedic timing to be able to bound from manic mugging to biting quips and a quick crotch grab for laughs and lust. And she leaves you wanting more more more. Liberato is her perfectly paired foil, exuding the breezy bravado of Instagram influencers with casually sharp comedy chops all her own. The two share a radiant chemistry that makes every scene delectable. They have me wishing for a reteam, sequel, spinoff, whatever. Just give me more more more!

Opposite these two sensational leading ladies, are Sprouse as the object of their shared affections and Luke Spencer Roberts as Nick’s best friend and the girls’ unwilling co-conspirator Ben. With long, blonde surfer locks and the hot guy looks of a WB star, Sprouse is an easy heartthrob and shares a believable sexual chemistry whether he’s sucking face with Marks or Liberato. He’s dreamy in scenes of flirtations, fantasy, and even ones of pathos. However, he smartly doesn’t overshine his co-stars, which would throw off the balance of this friendship-driven film. Meanwhile, Roberts proves a savvy scene-stealer. A friend to all three, Ben is frantic over this secret platonic relationship that will surely be revealed and thereby devastating. Roberts brings such a sharp anxiety and profound intention of mediation to this tangle of love that he is absolutely mesmerizing in moments of panic and pleading.

In short, this is a smart and moving comedy that will make you howl with laughter and call your best gal pal. It’s damn good stuff and shouldn’t be missed.

Banana Split is now on Netflix.