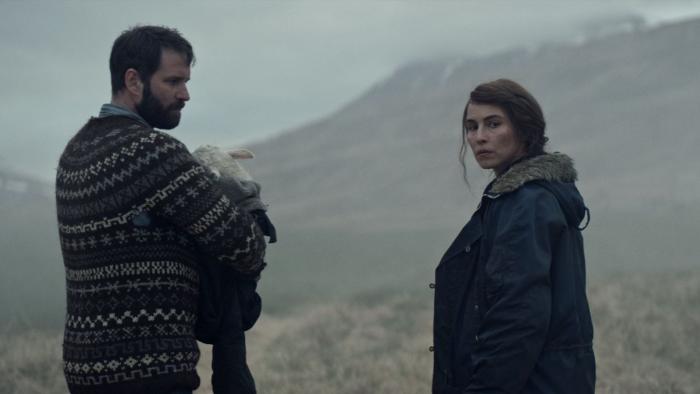 Fairy tales, folktales, fables — it’s funny how stories that often have such dark themes have also somehow become synonymous with bedtime stories. Though after watching Lamb, a film about an Icelandic couple who find something magical and convince themselves it’s theirs, I sorta get it. At least the sleepy part. For a movie that’s billed as horror, the most shocking twist in Lamb is how soporific it is.

Despite a runtime of an hour and 46 minutes that feels at least twice as long/interminable, the feature film debut from director Valdimar Jóhannsson isn’t without its charm — particularly visually. The use of the desolate landscape, all foggy fields and looming mountains, wraps the story in a sense of mystery and isolation. It provides the framework, both literally and figuratively, for the everyday lives of María (Noomi Rapace) and Ingvar (Hilmir Snær Gudnason) as they quietly work the fields and tend their flock. Are they protectively nestled, or are they stranded in the wild? What’s lurking in the crags, beyond the mist? But wait, I’m getting ahead of myself. The film begins on Christmas night, when something unseen enters the barn and, uh, does something to a sheep. Fast (or, you know… slow) forward a few weeks/months and it’s lamb season, as the couple helps the ewes birth their offspring in graphic detail while also plowing the fields and doing other general farm stuff. Their lives, as far as we can see, are content if not exactly happy, but that all changes when another lamb is born — a special one, a different one — and they swaddle it up and take it into the house.

The film takes awhile to reveal what, exactly, makes this lamb different from the rest, and though I’m not going to spoil it here you can pretty much figure it out from the trailer. How the film, co-written by Jóhannsson and poet/novelist Sjón, chooses to answer its own questions is both its greatest strength and, frequently, its biggest pitfall. We can tell this lamb is different simply because María and Ingvar react to it differently — because we’ve seen how they handled other lamb births before this one. And later, when Ingvar goes to the shed and extracts an abandoned cradle for the lamb, we can infer something else: That in the past there was a (human) baby at this farm. This couple wasn’t always childless. And once we’re aware of the shape of the absence in their lives, then we can begin to understand why they’ve so readily opened their home and hearts to this lamb. Some things don’t need to be explained to be understood.

Maybe that’s the motto for the film, really. “Some things don’t need to be explained to be understood.” When María, in a fit of frustration, finally takes a rifle to the lamb’s birth mother — the solitary sheep that has been standing at her bedroom window, plaintively bleating for the child — we can guess that she’s felt her own motherhood threatened by jealousy and judgment. Putting down livestock is part of a farmer’s life, but this killing was personal. This was an example of how far María will go to preserve the illusion of her new happy family. The next threat to that illusion arrives in the form of Ingvar’s brother, Pétur (Björn Hlynur Haraldsson), himself a mystery waiting to be unraveled. He’s unsettled to discover he’s now the uncle of an animal, and more disturbed to see how desperately his brother and sister-in-law are clinging to their odd form of domestic bliss. Hell-bent on reasserting reality into their fantasy, he sneaks the lamb out to slaughter himself… and has a change of heart. He chooses to accept the strange child, for their sake and maybe for his own.

The story proceeds in that fashion, with stray hints of tension dissipated by the iron will of the characters’ delusion — and then it’s back to the daily grind. Plow the fields, feed the sheep, fix the tractor. Sleep, eat, repeat. It doesn’t build to a climax so much as allow one to manifest out of necessity, and that denouement is sudden, inevitable, and patently ridiculous. In giving us the final piece of the puzzle we thought we needed — the answer of how the lamb came to be — it suddenly widens the scope of everything the film could have been. There was more to be afraid of here than María and Ingvar were aware of, and there are consequences for claiming something that was never theirs to begin with. But it’s a frustrating ending that undercuts all the work we, as viewers, put into understanding this tall tale. We filled in the gaps, dammit! We interpreted the unspoken! We somehow managed to rouse ourselves from our stupor anytime a hint of a theme seemed to present itself, only to be denied satisfaction — “The lamb looked in a mirror: Is it becoming self-aware? Oh… guess not.” And in the end we find that the ultimate answer is as hysterically obvious and unpoetic as the rest of the movie was opaque and erudite? You mean we could have been watching that movie this whole time, instead of this longwinded pastoral psychodrama?

Sigh. I’m still too bored by Lamb to get worked up. Look, the good news is that Noomi Rapace is, as always, outstanding, and also her cheekbones positively glow in the soft light of an Icelandic field. The movie is beautifully shot. And I don’t mind putting in the legwork of deciphering a story — I appreciated the sparse way the script meted out details through interactions, and the performances conveyed the emotions without words, and we could infer what was happening mostly for ourselves. I just think the whole thing could have been 30 minutes shorter and also built to the pay-off in a way would have at least made me chuckle with absurdity rather than annoyance.

So that’s the spoiler-free portion of this review. The film opens in theaters on October 8. Here’s the trailer:

So the baby lamb is some sheep/human hybrid thing. It’s got a lamb head and hoof, and then a human arm and legs. It can’t speak, so it’s hard to tell how much rationality, or humanity, is in its behavior — and in fact that’s one of the elements the film relies on viewers to try and determine for themselves. For María and Ingvar, it’s a miracle, a second chance at having the family they’d lost. They even name it after their dead daughter, “Ada.” It very well could be just that, a miracle, for all we know. We never see exactly what happened that cold Christmas night in the barn, just some unsettled livestock, and that sense of something disturbing the animals of the farm is really the only hint we ever get until the final day.

Something kills the farm’s shepherd dog. Ada sees it, but runs away back to the house — and that’s when she looks in the mirror. Then later she walks in the field with Ingvar and a gunshot rings out. Ingvar collapses… and a goddamn RAM-MAN (Man-ram?) is standing over him with the family’s rifle. Because duh, of course there was a monstrous part man/part sheep thing that lives in the hills and, apparently, came over and f**ked a sheep on Christmas night. Human/sheep hybrid lambs don’t just happen by themselves, after all. Ram-dude takes Ada’s hand and together they walk off into the mist, toward the mountains… and then María arrives to find her husband dead and her monster baby gone. The end.

So yes, there’s a supernatural creature here, the missing piece of the puzzle that explains Ada’s creation. But whatever his story is — who he is or what he is or where he comes from — doesn’t matter. He wants his child back. That’s it. Lamb is about the humans who so desperately wanted a child that they’d take in a hybrid, not about what mysteries might have given rise to that hybrid in the first place. That’s fine, that’s the film’s choice. Maybe I’m just a broken shell of a human being, but I’m much more interested in what that Ram-man has been getting up to the rest of the time.

← 'Ted Lasso' Episode 12 Recap: Every Choice Is a Chance | What Are the Burari Deaths? Netflix's True Crime Series 'House of Secrets' Explained →