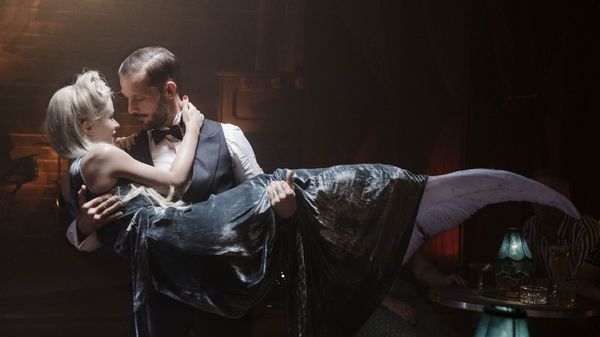 Review: 'A Mermaid In Paris' Plays Like 'Amélie' Meets 'The Lure'

A man in yellow rollerskates and a sharply pressed suit. A boat bedecked with bar tables and glistening in a dark Paris night. A siren washed up ashore, beautiful but lethal. These are the dashes of magic that begin the tale of A Mermaid in Paris, a French romance that plays as a mix of Amélie and The Lure.

Directed by Jack and the Cuckoo-Clock Heart’s Mathias Malzieu, A Mermaid in Paris (A.K.A. Une Sirène à Paris) stars Nicolas Duvauchelle as Gaspard, a forlorn lounge singer, who dreams of days past when his grandmother and her troupe of motley artists were rebels of culture and cause. His home is littered with mementos, baubles, and toys. His heart is broken from too many reckless romances. Yet in every swish of his rollerskates, there is a crisp sense of hope. Then, boy meets girl, specifically a lonesome mermaid who has been battered in the Seine. Lula (Marilyn Lima) is a singer too, but her song kills any man who dares to listen, swelling their heart so full of love that they burst!

We’ll see one poor bloke suffer this fairytale fate. As Gaspard mends her marred fin in his rubber ducky-rimmed bathtub, he ignores Lula’s warnings, insisting his heart is too shattered to ever be filled with love. However, there’s no denying the chemistry between these unlikely lovers, who are both rightfully guarded yet radiant with vulnerability. Soon, the two are sharing stories, beloved art, and even a song. Their flickering passion is encouraged by nosy neighbor Rossy (the big bold and beautiful Rossy de Palma), whose natural verve brings a dizzying zing to this fantasy. But trouble lurks on the horizon. Not only is loving Lula a potentially deadly endeavor; she’s also being hunted by a ferocious foe!

Set against a Paris that is painted in bold colors and sprinkled with stardust, A Mermaid in Paris feels like stepping into a storybook. Malzieu and co-writer Stéphane Landowski bring this world alive with curious characters, who are pointedly cartoonish in their passions and peculiarities, from gravity-defying hairdos to bathrooms with a hideaway stage show. Every inch of the frame is a space to add some sparkle or character. Every scene is a chance for this cast to gape and pop and mug with shock, horror, elation, or bliss.

Like Amélie its Paris is gorgeous and unapologetically strange, made glorious by its misfits. Like The Lure, there’s a dark thread that warns of the danger of surrendering yourself to love. Plus, both mermaid tales make splashy spectacles of the underbellies of urban nightlife. This time not a rundown burlesque club, but a submersed speakeasy with a vaudevillian flair is a place of intrigue and romance. However, with heroes who are a wee bit older, this is not a tale of first loves or first heartbreak but of daring to love once you’ve known the world-shattering agony of loss.

Dashing and debonair, Duvauchelle is a dreamboat from his first glide onscreen. But as Gaspard, his eyes—and the pronounced bags under them—carry a weariness that threatens to give way to cynicism. When he sings, he is a charm bomb, suave and sexy. When he gingerly pries his prized toys from Lula’s careless fingers, he is a heart-wrenchingly tender. Duvauchelle lays in a nuanced ache that makes each of these gestures ring with the effort of carrying on. Thus, once he begins falling for Lula, the lightness in his voice and movements is felt in our own bodies. His joy is buoyant and contagious.

As for Lima, she proves a surprising straight man, slinging side-eye to the tools of men, from bathtubs to forks, t-shirts to televisions. Her suspicion and stoicism score soft chuckles in this literal fish-out-water setup. However, Lula soon finds wonders in the human world, shedding tears of pearl while watching an old movie, girl-talking with Rossy in urgent whispers, and enjoying the simple magic of a night on the town with a marvelous man. In a surreal dance scene, where he swings her—tail and all—around the floor, it’s a bit of heaven neither dared to dream of. And we perhaps wish desperately that they will never have to leave this perfect moment. Yet the tale will swim along through a rocky climax to a bittersweet and well-suited resolution that may make you wish to rewind.

Awash with sparkle, sentiment, and song, A Mermaid in Paris is a totally enchanting romance. In his first live-action feature, Malzieu brings with him the unlimited possibilities of animation, presenting a Paris that is bursting with color, song, and magic. His pitch-perfect cast comes together to create a portrait of artists, misfits, and lovers that is wonderfully weird and warm. Together, Duvauchelle and Lima are spellbinding, while de Palma is gloriously larger than life (as ever). All of this melodically blends to make a movie that feels like a dream that leaves you humming happily as you wake.

A Mermaid In Paris made its North American Premiere at Fantasia International Film Festival on August 27, 2020.

Pajiba’s coverage of this year’s virtual event includes reviews of: Morgana, Clapboard Jungle, Feels Good Man, Hail To The Deadites, The Dark and the Wicked, and Class Action Park.

← Stream It Or Nah: Acorn TV's 'The Sounds' with Rachelle Lefevre | Millinocket Wedding in Maine Now Linked to 144 Coronavirus Cases and Two Deaths →