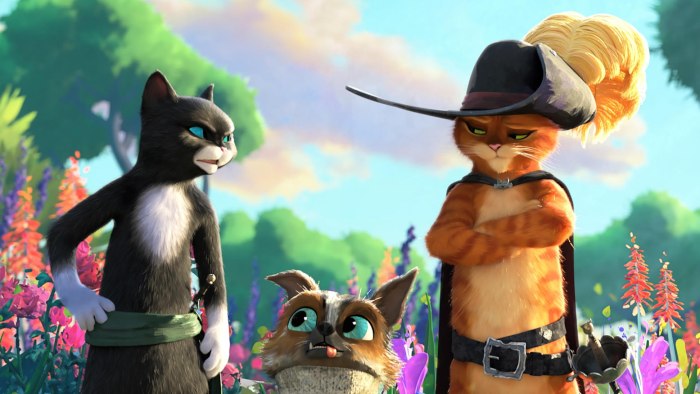 'Puss in Boots: The Last Wish' Is a Thrilling and Colourful Neo-Western

Eleven years since his first solo adventure, Puss in Boots is finally back and quick to introduce his audience to a new fairytale. Joel Crawford’s and Januel Mercado’s Puss in Boots: The Last Wish finds the Zorro-inspired feline seeking the last wish granted by a wishing star that fell from the sky. Coming face to face with Death, and realizing that this is one opponent he may not be able to defeat, he believes this wish will save his life. It’s not the only animated film this year to touch on themes of mortality, but it’s especially interesting to explore when centered around a character who attempts to appear so fearless. Puss in Boots: The Last Wish is an endlessly entertaining and colorful action-adventure neo-Western about a desperado attempting to understand what living truly means.

Puss in Boots (Antonio Banderas) is, above all, an entertainer. With Wild West-inspired cues in Heitor Pereira’s score, the film’s spaghetti western nods create a tone matching the suave, quick-drawing lead. Puss is wanted dead or alive, but that doesn’t stop his outlaw antics. Even when his carelessness wakes a destructive giant, his bravado earns him praise - a tip of his cavalier’s hat and a swoosh of his blade is all he needs to do for applause. Singing of being a fearless hero, he treats fights like a song and dance. Eventually, though, he misses a beat and finds eight of his nine lives spent. He’s laughed in the face of Death (Wagner Moura) before and has never been touched by a blade, but Puss finds that this is the most skilled and terrifying opponent he’s ever faced.

His swashbuckling days seem to have come to an end as he checks himself into Mama Luna (Da’Vine Joy Randolph)’s cat rescue. Domestication as a housecat doesn’t suit him no matter how hard he tries to fit in, but Puss seems to accept his new role as a “geriatric bag of bones,” as one character puts it. However, his cape, belt, and hat come back on quickly as he learns of a map leading to the wishing star, becoming determined to get his nine lives back.

Banderas excels at bringing Puss to life again with exuberance. There’s a real fervor in his voice performance that captures vulnerability in the often macho character. He’s incredibly skilled at capturing the feline’s bravado but also the true fear he experiences on this adventure. Banderas once again brings some real humor to the film as well, successfully embodying a character written to be so dynamic and colorful to match the film’s gorgeous animation. The animation fully commits to embodying the character’s style and spunk, especially with its thrilling fight scenes that emphasize every quick movement and clash of blades. The stunning and grand production design and ever-changing environments match his big personality and unpredictability nature.

On the way to getting his wish, many characters are hot on Puss’s tail with the same idea. There’s the cockney crime family of Goldilocks (Florence Pugh) and the three bears (Ray Winstone, Olivia Colman, and Samson Kayo); Big Jack Horner (John Mulaney), who’s turned his love of pies into a successful business; Puss’s old flame Kitty Softpaws (Salma Hayek Pinault), now in the role of rival cat thief; dog sidekick, Perro (Harvey Guillén), who is an annoyance at first to both Puss and the audience, but grows on both as he teaches the characters many lessons along this journey. (There’s also a Jiminy Cricket-type character, voiced by Kevin McCann doing an uncanny Jimmy Stewart impression.) The film provides a dose of magic when exploring fairytale and nursery rhythm characters in new, even dark ways. It’s also a treat to be able to pick out the references in both the dialogue and easter eggs onscreen.

Death proves to be a fascinating opponent, creating a viewing experience that’s both fulfilling and unpredictable. What’s also fulfilling — and in the end heartwarming — are the lessons that the characters are presented with. In our current hustle culture, consumer-driven society, we, like Puss in Boots, are always looking for the next thing to keep us busy or the hottest new toy to get our hands on. As a result, we forget to stop and appreciate what we have and forget that life is more than those things. Perro is able to stop and smells the roses, something that Puss has never done before. He has taken life by the sword. It’s been a life full of adventure and admiration, sure, but a life that’s been lonely, too. Love and friendship turn out to be the biggest discovery on this quest for Puss’s wishing star. But it’s not just a film about love and friendship, though, it’s about how it’s okay to be afraid. It’s a foreign emotion to Puss, but he learns how to face it, no matter the result. And what’s life without a bit of risk, anyway?