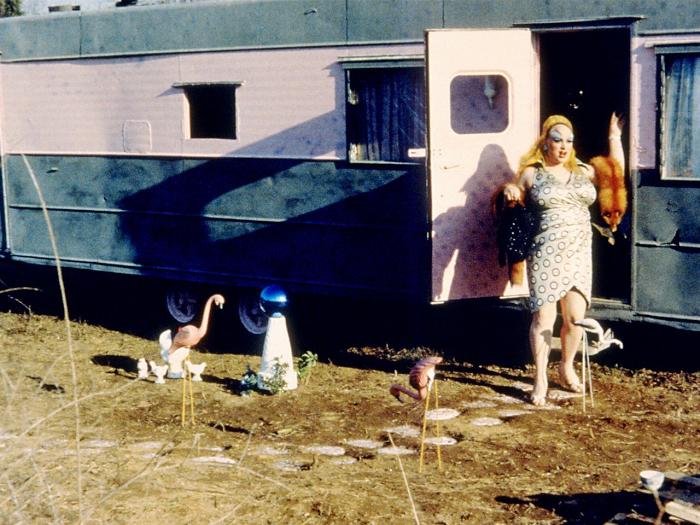 Picture it: Baltimore, 1972. A feisty church lady in a polyester pant-suit wraps a scarf over her brown football helmet of hair and heads out to spend a quiet afternoon at the movies. She sits down in the theater. She pulls out her knitting needles as the opening credits roll; she always knits while watching her stories. And then the singing begins. A frantic voice set to a skittish surf-rock beat. “A well a everybody’s heard, about the bird, B-b-b bird, bird, bird, b-bird’s the word,” the man sings. Only, well, not to put too fine a point on it, the music is seemingly shooting out of the man’s pulsing butthole as a crowd of maniacs caterwaul their approval, ankle-deep in mud. And then the cannibalism begins. As dessert after the show, you know.

So one imagines it went one 1972 afternoon for Mary Avara, the Italian grandmother and head of The Maryland State Board of Censors as she was morally assaulted by John Waters’ cult-classic-to-be Pink Flamingos—Mary was just the first of millions who’d have their good tastes molested by Waters’ troupe of deranged Dreamlanders over the next fifty years, but probably by far the most vocal. Avara actually became a minor celebrity in the 70s and 80s as the preeminent thorn in Waters’ skinny mustache, decrying his filthy filmmaking on Johnny Carson and Dick Cavett’s talk shows—the prim yin to his punk-rock yang, she was quoted saying that even Waters’ name made her “mouth feel dirty.” And per usual John Waters got the last dirty laugh. (Indeed you can sense Mary’s presence all over Waters’ ribald censorship comedy A Dirty Shame in 2004, his as-of-now final film.)

The one and the only Pink Flamingos premiered fifty years ago today at the Baltimore Film Festival, on March 17th 1972—yes that was St. Patrick’s Day, which was surely a bonus for Waters seeing as how his films have been, in between their boner gags, one long sustained attack on the hypocritical mores of the Catholic Church. Multiple Maniacs, the film he made right before Flamingos, was also released on St. Patrick’s Day, and that one features a “rosary job” (google it, I dare you) inside an actual working Baltimore cathedral. Flamingos, which Waters made with twelve-thousand bucks his father loaned him, would sell out all of its screenings that week, getting crazed standing ovations every time and landing Waters the title of “Man of the Year” on a local underground magazine cover. But it would take a full year for the movie, like a social disease, to spread outward from the crotch of Baltimore.

Waters had been in touch with the New-York-based studio New Line previously thanks to Maniacs—they’d passed on that one, but told him to get back in touch when he had something more “polished,” a word that always seems to anticipate “turd” for me, which in Pink Flamingos scat-crazed case seems only apt. And the studio loved Flamingos, but they had no idea what to do with it—Waters famously said that to the cast’s chagrin they tried releasing it in a gay porn theater for a week in Boston but that all the action was in the bathroom. After that, he managed to convince New Line to give the film play at the Elgin Theater in NYC, which had just had success basically inventing the concept of the “Midnight Movie” with Alejandro Jodorowsky’s surrealist stunner El Topo. And within a week Flamingos was the toast of the Big Apple. Check out the legendary trailer for the film, which contains no footage—just the stunned, gleeful, and wildly gay reactions of moviegoers stumbling out into the street after their screenings.

One can only imagine how the exploits of Divine née “Babs Johnson” (Harris Glenn Milstead), her chicken-fucking son “Crackers” (Danny Mills) and blood-fetishist daughter “Cotton” (Mary Vivian Pearce), alongside their egg-lovin’ crib-mama “Edie” (the wondrous special-effect that was Edith Massey), fell like a counter-culture nuclear bomb on an unsuspecting populace’s collective heads now—looking back it’s somewhat tough to frame, since our culture’s caught up to the place the prophet Waters saw in too many prescient ways. Andy Warhol rightfully gets the credit for thinking up the “fifteen minutes of fame” thing, but it was Waters who truly foresaw what hilarious and horrifying depths people would plumb in order to hold onto it. The plot of Flamingos, as much as there is one, documents an all-out battle to retain the title of “The Filthiest Person Alive” in the tabloids—shout out to David Lochary and the goddess Mink Stole as the villainous Raymond and Connie Marble who try to steal Divine’s rightful crown—and isn’t that basically the entirety of Reality TV? One would guess it was around the time the Survivors were shish-kabobbing rat carcasses on CBS Primetime that Waters decided to throw in the towel on the whole movie-making thing, because how could he compete with that?

That’s the line Waters himself maintains anyway, but I think he under-sells his abilities-watching Pink Flamingos in 2022 it’s still a delicious, hilarious affront, one that finds even soul-blackened and seen-it-all me covering up my eyes more than thrice with delirious revulsion. And I speak not only of the infamous finale where the legend Divine gnashes canine fecal matter between her teeth, giving us the truly final word on the concept of the “shit-eating grin.” There’s the ejaculate in a turkey baster; there’s the scrambled egg dangling between Edie’s exploding bosoms; there’s Divine hocking a mouthful of loogie onto a velvet couch cushion, and a mutilated Hershel-approved crotch shot in shocking too-close close-up. All of the body fluids are represented in a phantasmagoria of retch, and I wouldn’t have it any other way. John Waters earned his “Pope of Trash” and “Prince of Puke” laurels and then some, and we all need to bow down and bend over to our maker in blessed filth and his entire ragtag gang of drag monsters. They showed us the truth, the way, the light, and the singing asshole all at once. Filth is our politics, filth is our lives, and don’t you forget it!

← Everyone in the Cast of Christopher Nolan's 'Oppenheimer' So Far | Who Is Kamala Khan, Why Did Disney+ Change Her Powers, and Why Are People So Mad? →