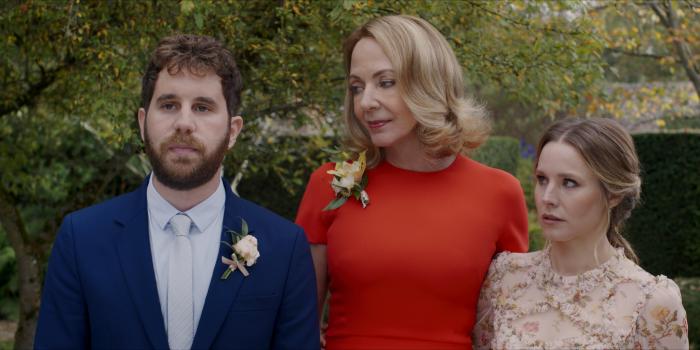 'People We Hate at the Wedding' Is Harmless Holiday Background Noise

People We Hate at the Wedding boasts a stacked cast, including Kristen Bell, Allison Janney, Ben Platt, Dustin Mulligan, and D’Arcy Carden—and they all appear to be having a great time. I can’t say that the level of zany energy the cast brings translates into a great (or even a very good) movie. But it’s definitely a good time, and well worth subbing in for offensively boring Hallmark movies this holiday season. (Provided nobody at your holiday gathering is a raging homophobe which … Yeah, godspeed.)

Allison Janney plays Donna, an American woman whose first marriage to the dashing and wealthy Henrique (Isaach de Bankolé) dissolved years before among messy affairs (on his part), leaving Donna to retreat back to the American Midwest to marry her second husband and have two more children, Alice (Kristen Bell) and Paul (Ben Platt). Alice is a dead-end beauty sleeping with her asshole of a married Silicon Valley boss. Paul is a terminally snarky OCD therapist. The two siblings are incredibly close, both incredibly messy, and both incredibly irritated and unenthusiastic about attending their picture-perfect half-sister’s, Eloise (Cynthia Addai Robinson), swanky London wedding. The most functional of family relationships, this is not. Always a promising premise for a fun family trip.

The predictable high jinks ensue: the hen party is a disaster, the rehearsal dinner a literal battleground, Donna and Henrique fall back into bed together, and Alice juggles men with all the grace of a newborn giraffe. But the plot of this family-driven comedy, of course, leads us inevitably toward family reunion and reconciliation. The emotional foibles of each character lead them to open-hearted reconnection, talking over the still-raw wounds that drove a wedge between the siblings and their mother.

The humor is obvious and satisfyingly awkward, the writing is fine but fun, and the performers all seem like they’re having a genuine blast.

There are any number of small delights along the way. D’Arcy Carden (who’s weirdly uncredited) has a brief, queer, made-for-TikTok-viral scene with Kristen Bell. Dustin Mulligan essentially reprises his beloved Schitt’s Creek character in a new setting. Cameos abound. It’s all good fun.

All the same, it’s nothing to really write home about. I got a few small laughs out of the slapstick moments and the cute flirty mishaps. But hey, the holiday season is a rough time and I’m not here to knock a light comedy for being exactly what it set out to be.

People We Hate at the Wedding is now streaming on Amazon Prime.


← What It Took for the GOP To Finally Delete Its Infamous 'Kanye. Elon. Trump.' Tweet | Why Has Tim Burton's Work Gone So Downhill? →