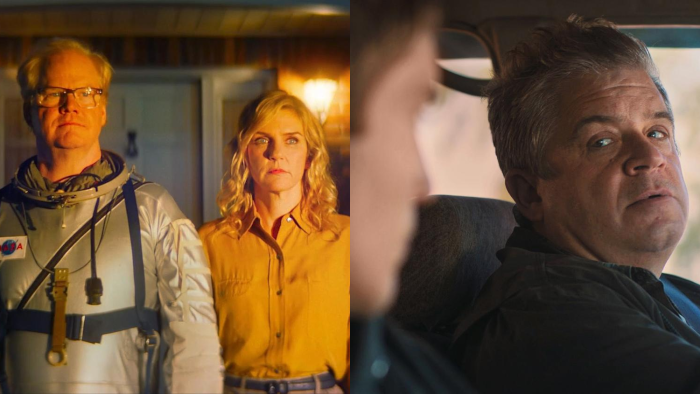 Both Patton Oswalt’s I Love My Dad and Jim Gaffigan’s Linoleum are ostensibly comedies, but they’re not really. One is a film about a man who intentionally catfishes his own son; the other is a surreal film about an astronomer trying to make a homemade spaceship out of fallen rocket parts. Both are weird and bizarre in their own rights and, more importantly, excellent showcases for their leads.

In I Love My Dad, Patton plays Chuck, divorced father to Franklin (James Morosini). Franklin has little time or love for Chuck, who is equal parts absentee and walking disappointment. After Franklin cuts his father off from all social media, Chuck creates a fake account in an attempt to continue seeing what’s going on in his son’s life. When his son begins chatting with “Becca,” Chuck is so thrilled to be having any form of communication with his son that he rolls with it, allowing the online friendship to turn to an online relationship. There are some amusing bits in the film, but you’re more likely to have a higher count of “oh god no” mutterings through gritted teeth than actual laughs, which is not a negative as much as a warning that the film gets exactly as cringey as “dad catfishes son” suggests.

There are a number of great supporting performances from the likes of Rachel Dratch, Amy Landecker, and Lil Rey Howery (plus Morosini and Claudia Sulewski who plays the real Becca), but through and through this is Patton’s movie and he gives it his all. This is not the first time that Patton has brought a pretty terrible and miserable person to cinematic life (see: Big Fan), but this is a richer performance because he layers his own warmth and humor into the mix as well. Big Fan had me intrigued to see Patton take on my dynamic roles, and now I Love My Dad has me excited for it.

Meanwhile, Jim Gaffigan will see Patton’s performance and raise him two performances in Linoleum where he plays both a down-on-his-life dad and the new neighbor across the street who, among other things, took his job. This film begins with Gaffigan’s Cameron seemingly seeing a car literally fall out of the sky. So yeah, it’s a surreal movie. Cameron, an astronomer who dreams of being an astronaut, is the host of a public access Mr. Wizard-type science show. When his show gets kind of picked up, he’s replaced by Kent Armstrong (also Gaffigan), a new man in town who happens to look a helluva lot like a brunette version of Cameron. To make matters worse, Cameron’s wife (the always perfect Rhea Seehorn) wants a divorce, and they haven’t yet told their children. And then the trifecta of bad hits when a satellite literally falls into Cameron’s back yard, forcing them to move out of the house. However, Cameron turns this into a positive, seeing this as maybe his way to get into space.

Armstrong turns out to be a terrible father, and so his son starts forming a bond with Cameron while also befriending Cameron’s daughter. There’s some teenage mishigas and family drama all swirling around what feels increasingly surreal as the film goes on, from an upside-down toy car in Cameron’s garage that looks an awful lot like that car that fell from the sky, to Armstrong’s car which looks an awful lot like it is that car that fell from the sky, somehow unscathed. It’s hard to get into more detail here because there is ultimately an explanation to the film’s surreality, which some may sniff out ahead of time (especially if they’ve seen a relatively recent Oscar winner that dips its toe in the same pool).

The film, unfortunately, falters when viewed on its whole (even more so by comparison to the masterful [redacted film title]). However, as a vehicle for Gaffigan, it succeeds. Much like Patton in I Love My Dad, Gaffigan’s characters aren’t easy to root for and make some curious decisions (though not quite anything as objectively horrible as “hey, I’ll get to know my son again by catfishing him”). But Gaffigan gives Cameron (the primary role) a real sense of earnest warmth that makes you want to root for him if he’ll give you a way. It’s not a spoiler to note that, as with many films where someone has a cockamamie idea initially shunned by their family, Seehorn’s Erin eventually comes around. Where goes Seehorn, so go we all. While the film may not stick its landing, Gaffigan’s performance is so well-grounded that it almost doesn’t matter. As with Patton, Gaffigan now has me excited to see what else he has up his sleeve.

I Love My Dad and Linoleum both had their world premieres at the 2022 SXSW Conference.