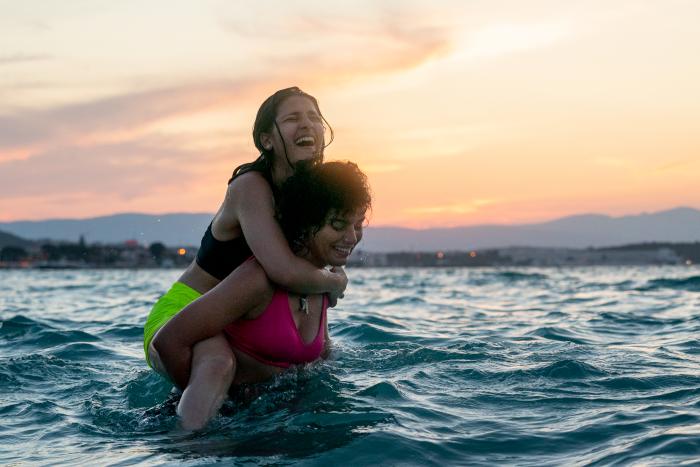 Netflix's Must-Watch 'The Swimmers' Is Harrowing and Triumphant

Sally El Hosaini’s The Swimmers is a biographical drama depicting the inspirational story of Syrian refugee and Olympian Yusra Mardini and her sister Sara Mardini. These sisters had an unwavering belief in themselves and their dream of becoming champion swimmers despite their unthinkable circumstances. The film is an ode to this determination but also to the bravery it takes for refugees to leave their homeland and the difficult sacrifices that need to be made. It’s a must-watch survival story that’s both harrowing and creates a viewing experience that leaves you in exaltation.

The film opens in the most fitting setting it could: At a pool. It’s 2011 and a beautiful day for a swim in Damascus. The sound of laughter fills the air but the score soon turns melancholy. It’s a quick shift, but a reminder that this moment will soon be fleeting. For Yusra and Sara (played by Nathalie Issa and Manal Issa, respectively), the pool is a second home. They have Olympic aspirations that are echoed by their supportive coach father (Ali Suliman), who wasn’t able to achieve that dream. Despite the images of revolution in the news, the life of the Mardinis seems both normal and perfect.

A few years later, that all changed. Yusra and Sara are drowned in the blue light and music on a dance floor, completely unaware of the orange glow of missiles lighting up the sky. The civil war has begun but they continue to try to live as though nothing is happening. Eventually, in Sara’s view, swim training seems pointless. Their Olympic dreams also are hard to visualize, too, especially when they don’t have a country anymore. The sisters decide to flee to Germany to apply to get their family out of Syria. Their mother (Kinda Alloush) and father clash about what’s best for their girls. Their mother believes that in Europe they’ll have a chance for a future, but in their father’s eyes that is too dangerous a chance to take and their status as refugees may ruin their swimming careers. Both parents are right in certain respects. They can have a future, but the road to it will be long and exhausting, and they may end up swimming for their lives instead of for a gold metal. And if they get to the end, there’s no guarantee they’ll see their family again.

There’s a scene in The Swimmers that shows people enjoying a day at the beach. They swim, jetski, go out on their boats, and the fact that refugees are drowning in that same water at that exact moment never seems to cross their minds. No one can understand what the Mardini sisters went through, except for the millions of other refugees that sought haven. The film not only focuses on Syrian refugees, but those from other countries like Afghanistan, Somalia, and Eritrea. Yursa and Sara meet many men, women, and children across their journey. It’s hard to know who to trust when being taken to a refugee camp is a reality, but the bonds they form with other refugees are incredibly touching.

The Swimmers is full of terrifying moments and a level of anxiety that leaves the audience frozen by the fear that is captured in the affecting performances of the film’s leads. Their performances are both heartwrenching and beautiful. Emotions are high, and while the sisters may fight at times, the love between them is heartfelt and you can feel the strength it gives them to keep going. They live an unthinkable reality, but it’s sprinkled with many moments of levity that allow us to see these sisters just be normal young women who love to have fun and dance the night away. It’s inspiring to watch them get through this experience and navigate living in a foreign place with such dedication, on Yusra’s part to compete in the Olympics and on Sara’s part to help all refugees that come after them. They joke that they’re superheroes, but they really are, and they deserve this time in the spotlight. Their story is a cause of jubilation.

Despite the triumphant feelings this story manifests in its audience, Hosaini, with the help of cinematography Christopher Ross, never let the viewer forget how colossal the Syrian refugee crisis, in particular, was. Lifejackets are captured from above and lying on the ground as symbols of the millions who fled the wartorn country. Many were never able to make it as far as Greek shores, and many who did weren’t welcome. It’s a reminder to never forget and a plea that if there is a next time, they will be welcome with open arms.


Swimmers is streaming on Netflix.