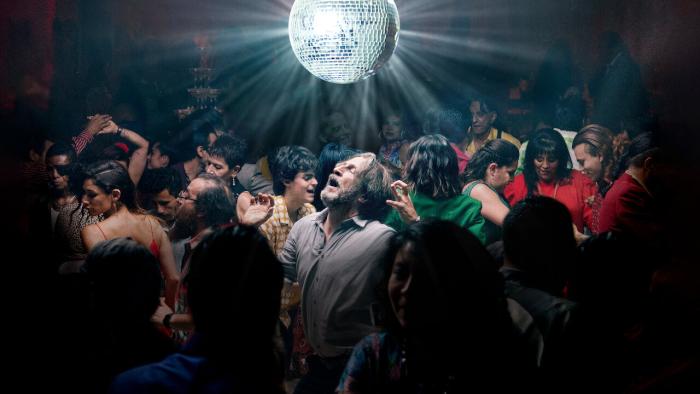 Silverio Gama is a Mexican journalist turned documentary filmmaker who is definitely not in any way inspired by Alejandro G. Iñárritu. A 20-year resident of Los Angeles, he’s preparing to receive a major American award for his work. Before that, he must return to Mexico and confront some hard truths of his past, his work, and what his entire life actually means. It gets weird.

Cards on the table: I don’t really like Iñárritu’s work. Every film of his inspires the same feelings in me: respect for the impressive technical craft and an overwhelming sense of tedium at everything else. I’m not alone in this criticism, although the Mexican filmmaker has enough devotees in Hollywood to elevate his status beyond such things. He is, after all, a man who won two Best Director Oscars in a row. Much is made of his acrobatic approach to cinematography (typically aided by Emmanuel Lubezki) and highly detailed set pieces. It’s all rather dazzling to watch … and it leaves me feeling cold once the initial spark dies down. To use a deeply overused and misused term, I find his films pretentious, not so much sound and fury signifying nothing as unbearable noise repeatedly trying to prove its dense intellect to me without any of the goods to back it up.

So, I can’t claim I went into Bardo, False Chronicle of a Handful of Truths with anything close to objectivity. But it’s also clear that Iñárritu didn’t make this film with the objective in mind. He’s eager to pre-empt any kind of criticism his film may receive, under the guise of self-critique, only to fall into every pothole we expect of his style. The most aggressively meta aspects of Bardo see Silverio (played by the impeccable Daniel Giménez Cacho) confronted with criticisms of his last movie. Most of them could have come straight from the mouth of the strawman meanie critic in Birdman, which already felt like self-jabs from Iñárritu. It then gets even more tedious when a frenemy lambasts him with a wildly negative review of what sounds like the film we’re currently watching. Dude, there’s no need for you to tell me what sucks about Bardo because I’m still watching it!

Iñárritu’s stylistic approach is akin to flinging a plate of overpriced pasta at the wall to see what sticks. And make no mistake: he does not skimp on the weird. We see Silverio’s wife give birth, only for the doctors to push the newborn back inside her because he informed the doctors that life sucks. It’s a moment of failed absurdism that becomes stomach-churning when it’s revealed that this circus trick is a representation of the couple’s son dying shortly after birth. Silverio has a meeting with the ghost of his late father, during which he takes the form of his younger self but with his adult head (the effects for this moment seem weirdly incomplete for a filmmaker who prizes craft, and called to mind the Colin Robinson scenes in the newest season of What We Do in the Shadows.) While walking through Mexico City, Silverio sees the women fall to the ground, ignored by the world as a metaphor for the missing and murdered girls of Mexico, and later he climbs a pile of Indigenous people’s bodies to have a conversation with Cortes about his massacre.

Some of this certainly looks great but it’s in service of what is essentially a hackneyed riff on 8/12. It’s Iñárritu’s All That Jazz but with Fosse’s excoriating self-hatred swapped out for diluted smarm. It doesn’t help that the director is clearly borrowing from greater sources, from Fellini and Jodorowsky to the music video for Radiohead’s ‘Just.’ We even get a surreal dance scene, scored to a vocal-only version of ‘Let’s Dance’ by David Bowie (but you can still hear the rest of the mix, another strange moment of ineptitude from the infamously controlled Iñárritu.)

There’s a sliver of my critical lizard brain that admires Bardo and Iñárritu’s sheer ability to get it made. Netflix had a brief burst of investing in celebrated auteurs’ dream projects before realizing that Tall Girl 2 and a reboot of The Mole would always earn them more subscribers. It seems unlikely that the streaming service will continue to fling obscene amounts of money at shameless vanity projects this audacious, for better or worse. I doubt Ted Sarandos knew what he was signing up for when Iñárritu pitched this.

But one cannot live on audacity alone. Nerve without point can’t help but feel like trolling, albeit with a more inflated sense of self-importance. There’s no psychological depth to Silverio/Iñárritu’s plight. We’ve seen all of this in every auteur’s semi-autobiographical riff on the perils of being an artist, and most of them did it way better (again, hello All That Jazz, which is also savvy enough to make its director stand-in a true piece of sh*t.) In terms of pure narrative, this is all pretty standard stuff: the marital and parental strife; fears over critical backlash; a struggle to overcome creative block; the inevitable stumble towards death. Iñárritu has no fresh or radical insights to this journey, which only further emphasizes how tedious his attempts at self-reflection are. There’s a barely mentioned side-plot about Amazon planning to purchase an entire region of Mexico, which I imagine is there as some sort of critique on American imperialism over the country, but Iñárritu does nothing with it. One wonders if it was intended for another story and was shoehorned in here for an attempt at depth.

I doubt we’ll see the likes of Bardo on Netflix again, which is a shame in theory, although the film itself works overtime to make that seem like a solid decision. It is, at the very least, the sort of expensive vanity project that American cinema has tried to eliminate, and its existence on that plane is cause for curiosity. Sadly, little else about Bardo deserves that kind of creative or personal investment.

Bardo will stream on Netflix on December 16.


← Prime Video's 'El Presidente' Is a Fun, Meta-take on Scorsese and FIFA-gate | Twitter Users Ponder the Films That Would Be Best to Muppetize →