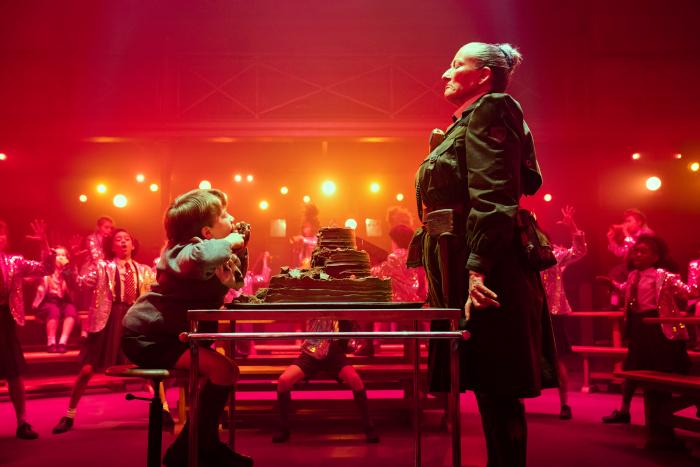 Netflix Brings 'Matilda the Musical' to the Screen

In 2010, Roald Dahl’s famous children’s book, Matilda, received musical treatment. Matilda the Musical was met with critical acclaim and awards recognition for both its West End and Broadway performances. It was only a matter of time before that success lead to a film. For many, Danny DeVito’s Matilda is a childhood staple and Mara Wilson will always be the one and only Matilda Wormwood. Tony Award-winning director Matthew Warchus’ Netflix film adaptation of the stage musical probably won’t change the minds of many who grew up with the ’90s classic; however, the transformation of this story still maintains its appeal with adults, while also acting as a brilliantly original introduction to new audiences. The musical has both similarities and differences to DeVito’s film, but the story remains the same. Behind the theatre-like sets and flashy, colorful numbers, however, are still dark themes of abuse and neglect. Matilda the Musical remains imaginative and inspirational in its telling of an extraordinary girl who inspires those around her to stand up and take charge of their own stories.

It’s goodbye to “Send Me On My Way” by Rusted Root and hello to Tim Minchin’s original song work. It starts right out of the gate at an untraditionally colorful hospital where parent after parent sings about the love for their newborn child. One couple, however, isn’t so enthused. Mrs. Wormwood (Andrea Riseborough) never wanted a child and Mr. Wormwood (Stephen Graham) was anxiously awaiting a boy. Matilda (Alisha Weir) was labeled a disappointment from the start. She’s a punching bag for the worst parents in the world. The Wormwoods are self-centered and egotistical, and their flamboyance matches the gaudy production design of their home. They’re too busy caring about making money through crooked means to remember that their daughter hasn’t even gone to school yet. Her parents’ neglect has made Matilda more independent than most children her age. She’s a bookworm, spending most of her time at a mobile library run by Mrs. Phelps (Sindhu Vee) who, unlike her parents, encourages Marilda’s love of reading. Books are escapism and inspire a rebelliousness in her. You don’t just have to “grin and bear it,” she sings. Putting some bleach in her dad’s hair tonic, she sings praise for necessary naughtiness.

Her acts of rebellion and revenge don’t just stop at home. Her parents finally send her to school, and she’s more than just a little excited. However, it doesn’t turn out to be what she expected. Crunchem Hall, for starters, is imposing and bleak, like a centuries-old manner that definitely saw more than one execution. It’s ominous and oppressive, completely drained of all color. New-girl Matilda is greeted with a song from the students about how to survive in a school with production design to match a prison. The only light is Miss Honey (Lashana Lynch), who sees Matilda’s potential when no one else does. She teaches with kindness and fuels Matilda’s desire to create her own story. In complete contrast to Miss Honey is the school’s villainous headmistress Miss Trunchbull (Emma Thompson). She’s still as violent and sociopathic as in the previous film. Her penchant for cruelty produces familiar scenes, like her throwing Amanda Thripp (Winter Jarrett Glasspool) over the fence by her pigtails and forcing Bruce Bogtrotter (Charlie Hodson-Prior) to eat a whole cake. Putting her students in the infamous Chokey, her makeshift iron maiden, is still a favorite form of punishment. Her office is like a surveillance room, keeping a close watch on her inmates at all times. Like an army general, she’s a stickler for rules and her past victories as hammer throw champion have taught her to favor those who don’t step outside the lines. Matilda challenges Trunchbull like no student before. By standing up to her, Matilda not only teaches the headmistress a lesson but encourages Miss Honey and her classmates to write their own stories.

The characters in Matilda the Musical are all recognizable but bring something new to the role to distinguish themselves. Our young, genius hero is played with infectious energy by Weir. The ease with which she is able to carry herself from musical numbers to more dramatic moments must be lauded and she carries the role with a sense of maturity. The character’s telekinetic powers, while present, don’t seem to matter much in this adaptation. Bravery and the power of a child’s creativity is the real superpower. She’s a great match to Lynch’s emotional core as Miss Honey. The bond between them doesn’t feel as strong as the one created by Wilson and Embeth Davidtz, as they had more scenes together in DeVito’s film, but you are able to still feel their connection as two people who’ve had to survive on their own. The film’s darker themes come through the most in Miss Honey’s story here and Lynch delivers an affecting performance and is able to successfully balance all this with lightness. The backstory her character is given here is cleverly rendered and speaks to how one person’s work of fiction is another’s truth.

As Matilda’s parents, Graham and Riseborough bring to life characters that are so unlikable but also incredibly fun to watch. It’s a balancing act that differs from the 1996 film. Their camp performances are so entertaining, and you look forward to every scene they’re in. While not to the same extent, Thompson as Trunchbull has moments where her absurdity is comedic. However, when she wants to be scary, you feel it. She’s still a brawny figure, and while the prosthetics work successfully gives Trunchbull the necessary harshness in her appearance, it’s clear that Thompson couldn’t have conveyed it as naturally as Pam Ferris. The intriguing mystery behind Trunchbull’s antagonism towards children isn’t given any answers here, but her fate aligns more closely to that of the book than the previous film did.

Matilda the Musical thrillingly transforms this story with its grander scale and exceptionally produced music and choreography, showing off the impressive skills of the children and all involved in bringing this theatre production to the screen. Despite its differences, it still maintains the same celebration of the underdog at its heart, with the satisfaction of squashing those who would oppress the freedom of our own storytelling.