Letterboxd is intended as a social media platform where users can share star-ratings, reviews, and lists about the films they’re watching, loving, and loathing. But the site has come under fire over a controversial decision to delete one user’s review of Quentin Tarantino’s Inglourious Basterds. 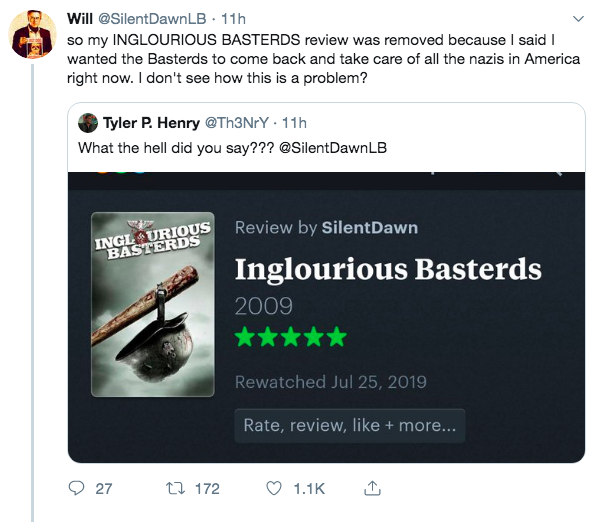 Letterboxd user Silent Dawn took to Twitter claiming that the platform deleted his review because it included his wish that the fictional WWII Nazi-eradicators would “come back and take care of all the nazis in America right now.” Notably, Silent Dawn did not @ the Letterboxd Twitter account or even mention the name of the platform. Yet Letterboxd responded, confirming his claim while insisting the deletion was because of his promotion of “violent hatred.”

We don’t wish to promote any form of violent hatred on our platform, no matter which side you come down on.

This response has not gone over well on Twitter.

Oh won’t somebody please think of the Nazis!

That’s absolutely not what we said.

We're not nazi sympathizers. Not a single one of us. We're not even neutral on the issue. Nazism sucks.

After a slew of tweets accused Letterboxd of being Nazi sympathizers, Letterboxd admitted they “f*cked up.” Which is more than some Twitter accounts have managed in the face of backlash.

Yep, we fucked that one up.

The majority of our moderating efforts happen behind the scenes. We’ll take this on the chin and double-down on our work.

Letterboxd also shared offered a sort of apology along with a clip from the anti-Nazi horror movie Green Room, in which the heroes sing Dead Kennedys’ “Nazi Punks Fuck Off.”

We regret the wording of our earlier response and accept it makes us look lame.

What we should have said: “Our community policy is clear on content that promotes, engages in or incites hate, violence or intolerance; our moderators moderate accordingly.”https://t.co/yKkf46lq7O

However, Letterboxd has not restored Silent Dawn’s review. So he posted a new one. 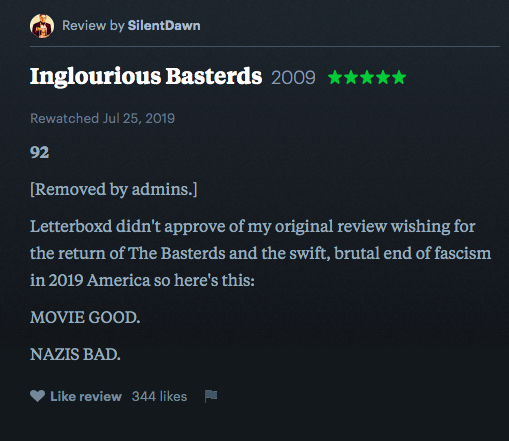 ← #MoscowMitchMcConnell, And Also How the Left Is Just as Easily Tricked by Fake News | Twitter Responds To Boris Johnson's First Visit To Scotland As Prime Minister →