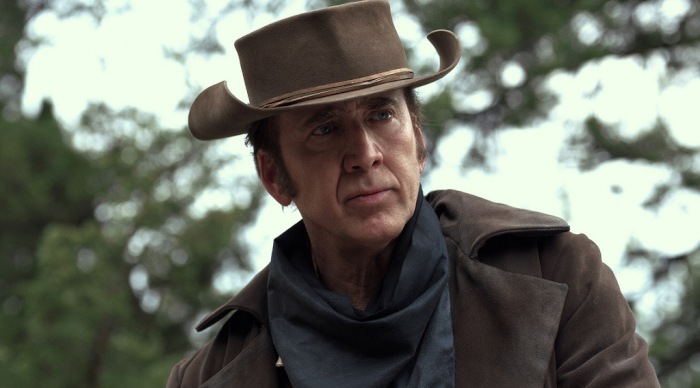 It Isn't Possible To Make Nicolas Cage Boring, But 'The Old Way' Manages It

I had a mild revelation while watching The Old Way, a new Western revenge drama with comedic overtones directed by Brett Donowho and written by Carl W. Lucas: ‘Oh, I guess it is possible to make Nicolas Cage boring. Who knew!’ The iconic actor—who I will forever maintain is one of the greatest of his generation—is perhaps as well known for starring in a plethora of mid-to-low-quality films as he is for his distinctive acting style, and The Old Way does nothing to satisfy those people who wish that he picked better projects more often: This is about as mid-to-low-quality as movies get. Both the director and writer have only made one or two films before it, so I can’t be too harsh on it, but I have to be honest. It’s not awful. It’s just not good either.

Westerns have been around for so long, and are so historically enmeshed in cinema’s DNA, that a lot of filmmakers just don’t know what to do with them these days. Do you go down the revisionism route? Do you try to put a ‘fresh new spin’ on them? Do you mix it with another genre entirely (Cowboys and Aliens, lol)? The Old Way does none of that. It doesn’t want to do any of that. It goes down the straightest road possible, bumping into so many clichés along the way that I struggled to remember details about the film before the credits finished rolling.

In The Old Way, Nicolas Cage is—*spins gunslinger name generator*—Colton Briggs(!), a mercenary (of the adjective kind) and emotionless killer who guns down people and takes what he wants without remorse. Or at least that’s the way we see him in the film’s prologue (during which there is an honest-to-god Wilhelm scream within the first five minutes, and that’s including the fifty or so studio cards!), in which he kills everybody involved in a prisoner hanging, regardless of which side of the law they’re on, and walks away with a load of money. The set-up and shootout are both staged, shot, and edited in a stilted, awkward way, scored with music that would be at home in a parody of the genre, and wonkily acted out by performers playing from a hackneyed script. That description could fairly be applied to everything else that follows in The Old Way.

Colton must know that he’s in a Western, however, or he briefly catches a glimpse of the future in the moment, as in that intro he dutifully leaves one person alive in the carnage. Pointing a gun at the last individual left alive, he hesitates a moment, and then reason/mercy/clairvoyance prevails: ‘Oh, wait!’, he must think to himself, ‘If I kill this guy too, is the past gonna be able to come back and haunt me once we cut forward twenty years to a time when my gunslingin’ ways are behind me?’ No, of course not. So down the gun goes and black the screen fades and suddenly we’re a few decades along. The mechanics of that plot, once it gets going, are not very interesting, and the complex morality that can be so compelling when a ‘villain’ commands our sympathy just as much, or even more so than, the ‘hero’ is not explored at all here. Colton, however detached and psychopathic, is held up as the person to root for without pause. His antagonist, in return, is gifted with some of the film’s very worst lines.

Even when starring in truly abominable dreck, Nicolas Cage can be the most watchable actor around, as his oft-maximalist choices are always fun and interesting to behold. In some of his finest works, he plays against that type, pivoting to more subtle and layered modes. Here, he’s coasting. Apart from a few line readings—mostly in scenes with the young actress who plays his daughter (Ryan Kiera Armstrong)—in which he veers closer to the gonzo essence that he can embody like no one else, it’s nothing to write home about. That’s a shame because there is the seed of a good movie here, and you can see its potential mostly in the scenes that involve Briggs and his daughter. Echoes of The Hound and Arya Stark’s wanderings through Westeros ever so briefly bubbled up here and there, though always in ways that made the film suffer by comparison.

There are a few decent shots scattered throughout The Old Way, and a subtle choice or two, but mostly it fails to do anything interesting with its characters, plot, or action. The best thing I could say about it is probably that I was sure that about three different characters would be played by Shea Whigham.

But then they never were. What a shame.

Finally, without comment, here is a bit of trivia from the film’s Wikipedia page:

In October 2021, the film’s crew members complained about property key assistant and armorer Hannah Gutierrez-Reed’s handling of firearms, including an incident in which she discharged a weapon without warning and caused lead actor Nicolas Cage to walk off set. Gutierrez-Reed would later work as armorer on the set of Rust.


← 'The Legend of Vox Machina' Season 2: More of the Same, but Better | Spoilers: 'House Party' Is Not a Party Worth Attending →