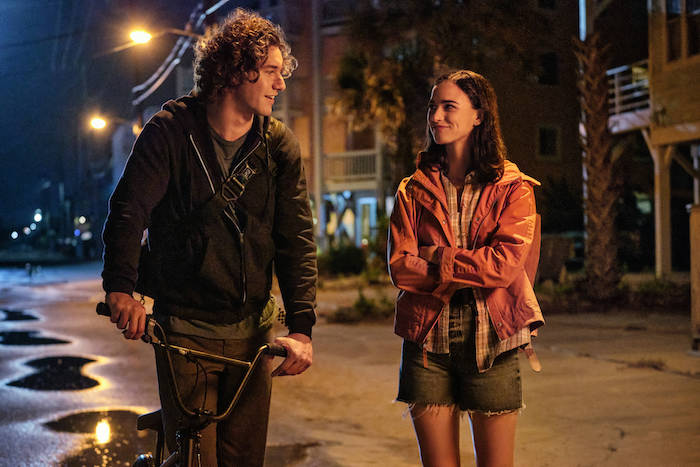 In ‘Along For The Ride,’ The Netflix Algorithm Cruises on Autopilot

After an engaging opening sequence that utilizes the classic expectations versus reality bait and switch to introduce Auden (Emma Pasarow), a protagonist with an endearingly relatable dilemma—the realization that one has lived one’s high school years in a painfully boring, decidedly un-John-Hughes-like way—Along for the Ride attempts to coast off that initial burst of momentum for an hour and a half of ephemera.

The directorial debut of writer Sofia Alvarez, the scribe behind the film adaptation of To All The Boys I Loved Before, one of the more distinctive entries in the Netflix YA canon to date, along with the first of its sequels, Along from the Ride is adapted from the novel of the same name by YA powerhouse Sarah Dessen. In spite of a strong beginning, the film ultimately fails to live up to the charm one would hope to find in a story from Alvarez or Dessen — but more on that later. First, the story.

Having spent most of her adolescence aiming for sophistication to impress her academic mother, Victoria (Andie MacDowell, continuing the run of non-traditional mom roles that has been the bulk of her filmography over the last several years), Auden decides to spend the summer between high school and college with her absentee father, Robert (Dermot Mulroney, giving zero) and his peppy new wife Heidi (Kate Bosworth) doing all the normal teen things she previously scoffed at, like going to bonfire parties and kissing boys she doesn’t know. Much to Victoria’s chagrin, instead of pursuing an internship to further bulk up her resume, Auden will be spending the summer in the beach town of Colby, working in Heidi’s boutique while Heidi stays home with Auden’s newborn half-sibling.

However, kissing a boy she doesn’t know at a beach bonfire party proves less enjoyable than Auden anticipated, partly because said boy is a douchey backwards-cap type with no technique, and partly because he’s the recent ex of local popular girl Maggie (Laura Kariuki) who, along with her beta friends Leah (Genevieve Hannelius) and Esther (Samia Finnerty), happen to also be Auden’s new coworkers. It seems like a new change of scenery can’t prevent Auden from falling into the same old socially isolated patterns—until her lonely late-night walks along the boardwalk lead to her crossing paths with the alluringly mysterious midnight biker Eli (Belmont Cameli), who has just enough of a beach-boy-with-edge flair to make you remember just how incredible Heath Ledger was. To be clear, Cameli does not fill that great void or even part of it. It’s more a salt in the wound sort of deal.

Remember 10 Things I Hate About You? We didn’t realize back then how good we had it.

The experience of watching Along for the Ride is best described like opening a shiny gift box to discover it’s full of packing peanuts. And you dig through the packing peanuts in the hopes of finding some treasure protected within, but no, that’s it. It’s just a pretty box filled with foam bits of nothing. Nothing effectively happens for the next hour or so of the movie. And then suddenly, it’s over. Characters go from not understanding they have problems to dissecting their own issues with the sort of eloquence one typically only gets through years of work and quality therapy as if by magic. Relationships show no progress and then are magically healed. And none of this is the good “movie magic” magic—it’s the lame kind of quackery where you can see the wires and the trick card up the magician’s sleeve.

There are some out there who belittle YA films for their patterns, their well-worn tropes, and fantastically idyllic conclusions. I myself am firmly in the school of belief that such comfort food genres, with their easy familiarity you can slip into like cozy slippers, can still make for good movies, even great ones. If set-up and pay-off are done well, if the characters are enjoyable to watch and the dialogue is witty, it doesn’t matter how familiar a path the beats of the story tread — it can still be a good time. This movie is not a good one, and that’s not because it’s covering a lot of familiar territory, or even because it’s predictable — it’s because it doesn’t do these familiar, predictable things well.

There are a lot of parts of Along for the Ride that don’t really work. The character journeys that are not arcs but flat lines. The dialogue is overwhelmingly stiff and flavorless with only the occasional spark of life. The fact that Auden and Eli have -5 chemistry. But the most distinctive shortcoming in all of this is how these flaws, on the whole, don’t feel like accidents, but choices. It’s a film with more attention to detail and effort given to the first 10 minutes than the remaining 90 minutes combined—long-form content built with the presumption that the average viewer has about a 10-minute attention span, and instead of endeavoring to overcome that obstacle, is more or less designed to be a fun intro and then background noise. It is, in a sense, a microcosm of the sort of content the Netflix algorithm tends to make in a way that really drives home why, as the streaming wars heat up, Netflix isn’t the unconquerable behemoth it was perhaps once believed to be.

Along for the Ride is now streaming on Netflix.


← In 21 Seasons, Has There Ever Been a More Laughable Episode of 'Law & Order'? | 'The Innocents' Explores the Dark World of Children →