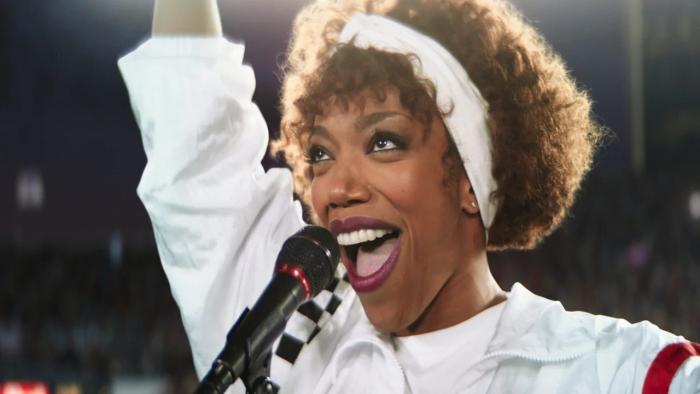 I Wanna Dance With Somebody is a love letter to a titan, directed by the fantastic Kasi Lemmons, the woman who gave us Eve’s Bayou, and stacked with a powerhouse cast who’s giving their all. Despite all that, the movie achieves little more than a highlights-and-lowlights reel of a famous and tragic life, while allowing us some moments of glory and mourning to revel in Houston’s incredible talent. The fault lies squarely with the writing—and certainly not with Naomi Ackie’s tremendous performance as Houston, which is all the more impressive given the material on which this teetering, three-hour portrait was built upon.

Houston’s legacy deserved better than a wan musical biopic, and it came so close to getting it. Of all the things to weigh this movie down, the screenplay was a weak foundation that gave the film very little to work with from the get-go.

The movie traces Whitney Houston’s meteoric rise and fall with chronological plodding, beginning with her discovery in the early ’80s by legendary music producer Clive Davis (Stanley Tucci) while singing backup for her powerhouse mother, Cissy (Tamara Tunie). Stardom comes knocking with a one-two punch of money and talent as Houston signs with Davis, who becomes her lifelong collaborator, support, and father figure. Houston’s relationship with her girlfriend Robyn (Nafessa Williams) is rendered impossible by the publicity of her new career and the pressure from her father, played sternly by Clarke Peters, who becomes her domineering and exploitative manager during the height of her career. Ashton Sanders plays a volatile but occasionally sympathetic Bobby Brown, portrayed as a corrupting trickster who steered Houston down dangerous and unintended paths, though in the end she mysteriously doesn’t hold him responsible for any of it.

The portrayal of Houston’s downward spiral is like rewatching a trainwreck in slow time, after watching it painfully unfold in real life. Paradoxically, the portrayal of Houston’s struggles with addiction was emotionally effective for me specifically because I did watch it in real time. I remember I was on a bus to Boston when Houston passed, and the bus driver turned the radio way up with a news and blasted her music for a full hour. Yeah, I cried in public on that bus. The movie does the equivalent of blasting her music and recounting her troubled downfall, as the radio DJ did on that bus ride, just far, far less passionately and effectively.

Scenes that are meant to tug at the heartstrings stumble and fall—including the fairly tasteless inclusion of Houston in a bathtub with water dripping ominously from the tap. Limply uninspired moments meant to show Houston’s power and appeal—like Americans of all races gathering around televisions to applaud her—come off feeling so stagey I was left cringing.

The creative team painstakingly recreates Houston’s iconic looks and costume, from her Superbowl tracksuit to her hair and gown at the 1994 American Music Awards. In the scene when she delivers her now-iconic medley, the screens beside the stage occasionally swap out Ackie’s performance with the actual footage of Houston. Ackie’s transformation and precise mimicry of mannerisms is something to see.

Unfortunately, the screenplay was written by Anthony McCarten. That’s right, the white man who gave us such heartless cookie-cutter Oscar bait as Bohemian Rhapsody. McCarten is up to his old tricks of padding out the runtime with scenes of enthusiastic lip-synching and absolutely zero nuance to major plot developments. He called the previous attempts at putting Houston’s story on screen—four in the decade since her death—“sensationalist.” I don’t know what he was going for here besides another Oscar nomination by rewriting his highly fictionalized Freddie Mercury biopic but with Whitney Houston this time.

Here’s my impression: Kasi Lemmons and a stellar cast was handed a screenplay with all the cliched, cardboard character of Bohemian Rhapsody and at least did something with it. Everybody is swinging for the fences on screen, despite the fact that all their characters are as flat as a Wikipedia summary. Lemmons squeezes out some truly tender moments: Houston and her daughter sharing small moments when Bobbi Kristina is finally allowed to visit her mother in rehab. But even Lemmons can’t transform this movie into gold. It’s worth noting that Lemmons was called in to replace Stella Meghie, the film’s original director, who left the project over unspecified creative differences.

I did appreciate that I Wanna Dance didn’t shy away from depicting Houston’s queerness, foregrounding her relationship with her longtime partner Robyn. The end of their romantic relationship is a ham-handed depiction of internalized homophobia and the influence of Houston’s very religious upbringing. For all the we-stan-a-bisexual-icon rah-rahing of the queer community online, this portrayal of Houston shows her sexuality as something that was conscientiously steered toward men for the sake of her brand.

As a whole, the movie doesn’t achieve much as a film on its own, but it does go out of its way to celebrate the power of Houston’s talent and her trailblazing role in the music industry. A better version of this movie would have told the story of the dangers of fame and the devastation paying that price so publicly. While I Wanna Dance With Somebody gestures bluntly toward those themes, it doesn’t land them. It’s more of a biographical recitation than a fresh insight. For Houston fans, it’s a melancholy love letter. But like Bohemian Rhapsody, it’s hardly a worthy or defining story for the legend it represents.

But since I was assigned this review, this is my obligatory bragging-on-the-internet-about-my-wife moment because one time she sang “I Wanna Dance With Somebody” with Mavis Staples in a music festival jam circle.

I Wanna Dance With Somebody is only in theaters.


← This Week's Devastating 'Fleishman in Trouble' Is One of the Best Episodes of TV This Year | Spoilers: 'Emily in Paris' Season 3: Emily For Once Is Not the Source of Drama →