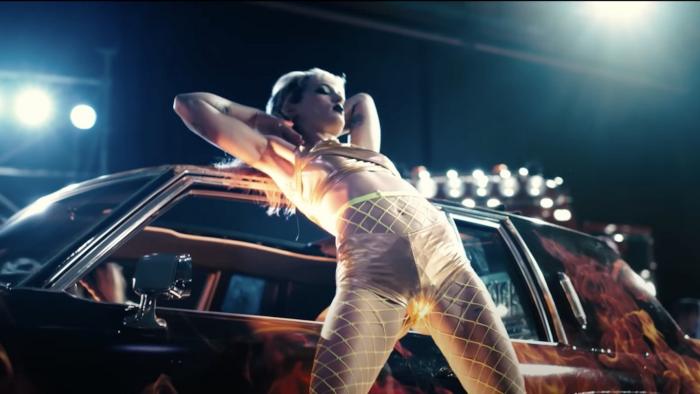 This post contains spoilers and is probably NSFW. You have been warned. Honk.

David Cronenberg, the undisputed Canadian king of body horror, is returning to the big screen this Summer with Crimes of the Future, his first film in eight years. The man who brought us Videodrome, Scanners, and Naked Lunch is back with a film he has already promised will make us all want to vomit and run away from the cinema. The film stars Viggo Mortensen as a performance artist who grows new organs inside of his body as part of ‘Accelerated Evolution Syndrome’ in a world where pain no longer exists. I can’t wait. I fully expect to leave the theater with queasiness and a possible anxiety attack, just the way I like it, baby!

Before the film premieres in competition at this year’s Cannes Film Festival, Mortensen has been talking up his long-running collaborative partnership with Cronenberg. He’s also been getting in a few digs at who he sees as Cronenberg’s pretenders, most notably Titane, last year’s Palme d’Or winning body horror drama that many compared to Cronenberg’s back-catalog. Titane centers on a strange woman with a fetish for vehicles who (spoiler?) eventually becomes impregnated by a car. In comparing Titane to Cronenberg’s Crash, a film about people who get turned on by car crashes, Mortensen said, ‘no offense to the director of ‘Titane’ [Julia Ducournau], but ‘Crash’ was head and shoulders above that movie, because it wasn’t just about superficial shock value and unconventional imagery. There was a story beneath it, there was true character exploration in ‘Crash,’ much more than in ‘Titane,’ I think.’

We could be here all day dissecting this quote. For one thing, I have an issue with a woman director who wears her influences on her sleeve being positioned as some sort of superficial copycat, and I’m not sure Mortensen understood what Titane was actually about. I’ll leave that conversation to others for now. What interests me more is the fact that we now have this strange and hyper-specific subgenre of pop culture: the car-f—king movie. I, of course, am obsessed.

Cronenberg’s Crash isn’t technically a car-f—king movie, not in the way that Titane is. Nobody actually has sex with a car. Rather, the characters engage in curiously clinical sex games centered on a unique fetish for car accidents. Based on the book by J.G. Ballard, James Spader plays a man named James Ballard (subtle) who, after surviving a head-on collision with another car, finds himself embroiled in the world of symphorophilia. He and fellow crash survivor Helen (Holly Hunter) join the ranks of Vaughan (Elias Koteas), a cult-like figure who stages recreations of famous car crashes and preaches the gospel of how such incidents reveal a ‘benevolent psychopathology that beckons towards us.’

When Crash premiered, it was wildly controversial. It won a special jury prize at Cannes but the president of that jury, Francis Ford Coppola, reportedly loathed the movie and wouldn’t even hard over the award to Cronenberg. British tabloids aggressively campaigned to have Crash banned, and it eventually was in Westminster Council. Ted Turner tried to cancel its release in the U.S. Certain mouth-frothing figures seemed utterly convinced that the film was a deviant disgrace that would encourage the weak-willed perverts of the world to crash their own cars while fucking maniacally. Spoiler: there are no reports of that ever happening. While it’s true that Crash contains several sex scenes, I’m not sure those amateur censors actually saw the film. If they did, they would have been confronted with a film far more interesting than their ignorant assertions.

Crash is typically named as the biggest example of the car-fucking genre but the concept of the cultural fetishizing of vehicles, and the intersections between products and sex, is far older. Mechanophilia is the name given to a sexual attraction towards machines. Philosophers and artists have explored the concept for about a century, particularly as industrial growth skyrocketed during the 20th century. Some see is as a kind of necrophilic action, a way for a living breathing being to engage with the inanimate in a way they wouldn’t with a fellow human. Others think of it as the future, the natural extension of an increasingly technological existence where the mind and machine have begun to blur. Hey, if you’ll use a sex toy then why not a motorcycle? The sexualizing of cars is so widely accepted by society that we barely notice it, from the default gendering of vehicles as female to the endless assembly line of advertising that uses half-naked women writhing atop a sleek sports car to sell everything from burgers to music. Vin Diesel may not plow down any of the cars in the Fast and Furious franchise but those films are still continuing that fetishistic tradition, with the camera slowly moving down these vehicles like a giant tongue.

Cars are a symbol of adulthood. You turn 16 and you get to learn how to drive. It’s a ticket to freedom, a way to prove that you’re ready for real responsibilities, for better or worse. In Christine, Stephen King’s novel which later became a film directed by John Carpenter, the object of vehicular lust turns its nerdy outcast owner into a douchey cool guy before evolving into the vengeful representation of many a wronged woman. Through Christine, lonely little Arnie becomes a man who is felled by the ultimate femme fatale. Even by King’s standards, it’s fascinatingly horny (and it’s no wonder that it’s in the midst of being remade by Bryan Fuller, whose own approach to horror is ‘make it much gayer and hornier’. I can’t wait for that one.)

Women and cars blending together into an amorphous form of sex and control forms the most interesting and oft-mocked scene in Ridley Scott’s The Counselor. While the film is mostly impenetrable in a way you’ll either love or hate, the scene where a never-fierce Cameron Diaz fucks the window of Javier Bardem’s car is a cinematic highlight for the ages. Diaz’s character Malkina is a gangster’s moll if she’d been crossbred with a wildcat, and she slinks through every scene with the determination of a Versace model who happens to be heavily armed. Dressed in cheetah print, she crawls across Bardem’s Ferrari, spread-eagles the window as he watches, and gets off on nothing but glass and immense thigh strength. Malkina orgasms without a man’s touch, without her more powerful boyfriend being involved in any way other than as a wildly confused voyeur, and she leaves an indelible mark on the car he worships. ‘Seeing a thing like that changes you,’ he later declares, before writing the moment off as ‘too gynaecological to be sexy.’

More than Titane, it’s this moment in The Counselor that reminds me of Cronenberg’s Crash. Sex without sexiness. So clinical and devoid of human warmth that you can’t help but wonder what the point of it all is. Cronenberg and Ballard’s story is maybe the least sexy film about sex I’ve ever seen. Nobody looks like they’re enjoying the fucking. It’s more mechanical than the cars they crash with impunity. In one scene, the two leads have sex while one of them asks for details about the penile and anal scarring of another, and the discussion is as glacial in tone as a visit to the bank.

Titane and Crash aren’t cinematic twins but they do share DNA in terms of the intersections between vehicular fetishism and bodily transformation. Vaughan explains to Ballard in Crash that he is interested in the reshaping of the human body by modern technology.’ A vulva-like scar on the back of one character’s thigh is shot more erotically than any of the sex scenes. By the end, everyone is physically scarred in some way, flesh carved by metal into something as jagged as any knife. In Titane, the malleability of flesh is more focused on subverting our notions of gender than sex. The protagonist, Alexia, abandons her life after a spate of casual murder and chooses to disguise herself as a man. She breaks her nose, haphazardly cuts her hair, and binds her chest and growing bump to pass as a young man who went missing a decade prior. It’s a shoddy disguise at best, one that doesn’t seem to fool anyone, but that’s the point. It’s such a brash contrast from how we first see her as an adult, scantily clad and writhing atop a flashy car in a moment that feels like a parody of a Carls Jr. ad. Her performance of femininity is tied to her excitement for cars (this is also a rare instance of a car in pop culture being deliberately gendered, presumably, as male.) The body can only take or allow so much. How does that work for an inanimate object, especially when we empower it so much through our desires?

There’s a tension between the body and technology, the former so intrinsically fragile and bound by a short lifespan, and the latter designed to outlive us all. Perhaps imagining a cohesive and mutually beneficial relationship of power and desire is easier to swallow than the age-old fear of an old-school computer takeover of the planet. Either way, humanity will continue to fight for what it wants, and primally speaking, we’ll always find a way to fuck.


← Netflix's 'Lincoln Lawyer' Is Not Bad | Review: 'Downton Abbey' Might Have Found 'A New Era' But It's Blessedly Just More Of The Same Ol' Frothy Business →