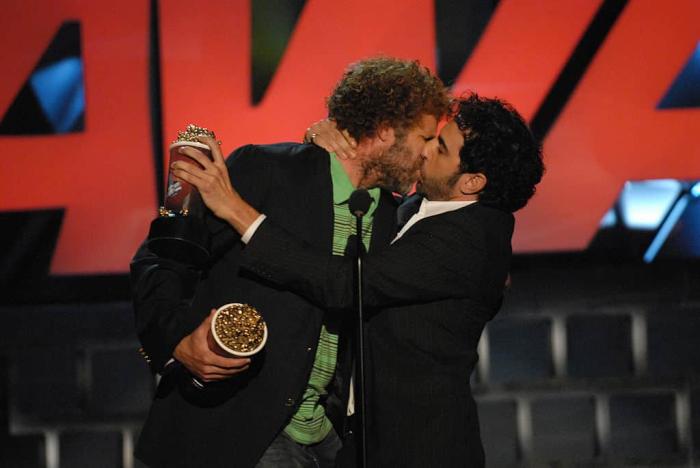 Have You Ever Thought About How Weird the MTV Movie Award for Best Kiss Is?

You probably won’t see a lot of actors keeping their MTV Awards alongside the Oscars or Emmys. The popcorn trophy that can typically be spotted on the shelves of tween stars and anyone from the Twilight saga who isn’t Robert Pattinson or Kristen Stewart has never been a symbol of prestige. The modern-day relevance of the award remains questionable given MTV’s own dwindling popularity and Gen-Z’s move towards more online-based entertainment. Still, there’s something about this curious awards show that’s always kind of fascinated me.

Founded in 1992 — and originally hosted by Dennis Miller? — the MTV Movie Awards were designed to be another Gen-X sign of effortless cool and vague counter-cultural radical chic. Sure, the Oscars love all those serious dramas your parents like, but MTV’s here to shout out the Terminator movies and drool over Keanu Reeves and not be embarrassed about enjoying brash comedies or explosion-filled blockbusters. Where else could you see Aladdin, Basic Instinct, and Malcolm X competing against one another? Occasionally, that practiced edge paid off, with moments like awards given to the director of Hoop Dreams or a then-unknown Wes Anderson. As with all MTV Awards ceremonies, the hope was that the show — which was initially broadcast live — would spark those headline-ready moments. Create enough opportunities and chaos will reign.

That seems like sound reasoning for a category called Best Kiss. Well, that and this is a show intended for younger audiences who like to watch hot people smooch. It’s the perfect way to get the fans screaming, whether it’s out of shipping glee or pure comedic delight. You won’t see that kind of passion at the Oscars (unless it’s creepy and non-consensual like that time Adrien Brody won Best Actor and tried to WW2 kiss Halle Berry whether she wanted it or not.) Really, I think it’s the Best Kiss category that gives us the best lens through which to view this weird awards ceremony and its impact on pop culture at large. Because seriously, it’s kind of a bonkers thing to exist.

The MTV Award nominees run this gamut in often unexpected ways. Take the first year of the award, where the winners were Anna Chlumsky and Macaulay Culkin for My Girl, two literal children. It at least makes sense for MTV’s younger demographic to be excited for the most famous child actor of his generation to have his first major on-screen kiss, but its place among those other nominees can’t help but feel a touch discomfiting: Anjelica Huston and Raul Julia in The Addams Family; Annette Bening and Warren Beatty in Bugsy; Priscilla Presley and Leslie Nielsen in The Naked Gun 2½: The Smell of Fear; and… uh… Robert De Niro and Juliette Lewis in Cape Fear. The messages are, to put it mildly, mixed. Are we supposed to leer at all of this? Or laugh? Or be uncomfortable? Remember, De Niro’s manipulating a teenager in Cape Fear. It’s meant to be horrifying. Did MTV read it this way and see its nomination as a way to celebrate an effective moment of characterization? Or were they actually into it?

That blend permeates this category over the decades. Sure, it’s kind of funny when the kid and the whale from Free Willy get nominated, but what MTV kiss is hyped to see Anthony Hopkins and Julianne Moore kiss in Hannibal? Are the kids super into How to Make an American Quilt?

And what about that nomination for Jeremy Irons and Dominique Swain in Lolita? You know, the story about the pedophile? It’s pretty famous. Maybe you’ve heard of it. I could probably spend thousands of words writing about Adrian Lyne’s adaptation of Nabokov’s novel, how much he wildly missed the point of the source material, and how giddily the media indulged in sexualizing a child with its promotional cycle. Sadly, I wouldn’t be short of material. So much of the marketing around that film sold it as a romance, and I would argue the film does too. But seeing the ‘cool kids’ of MTV invites us all to get hot and bothered by Irons kissing a 14-year-old and place it alongside moments like the three-way in Wild Things is certainly indicative of something sinister about ’90s entertainment. Once again, who is this for, and why?

There are moments where this category feels somewhat ahead of its time. Same sex kisses are frequently nominated and have been since 1997 (shout out to Jennifer Tilly and Gina Gershon in Bound.) However, it’s still rare during most of the ’90s and early 2000s to see same-sex representation here that isn’t either a joke, like Will Ferrell and Sacha Baron Cohen winning for Talladega Nights, or straight-up fetish fuel, such as Owen Wilson getting it on with Amy Smart and Carmen Electra in Starsky and Hutch. It’s easy to see how some could take these crumbs as a sign of progress in the vein of visibility at all costs, but there’s still a tinge of the othering about it all that leaves me uneasy. As refreshing as moments like awarding Brokeback Mountain feel, you wonder if the intent is clear, but it did get better in later years, with the award going to proudly queer works like Moonlight.

But progress has been made. As the awards broadened its horizons to include television as well as film, MTV seemed happy to wear a more proudly progressive agenda on their sleeve. Acting categories were no longer divided by gender. Best Fight included matchups like ‘Ruth Bader Ginsburg vs. Inequality’. Hard-hitting documentaries like Surviving R. Kelly and At the Heart of Gold: Inside the USA Gymnastics Scandal were mentioned.

Pop culture awards tend to be terrible measurements of merit but they’re excellent barometers of how a particular industry wants to see itself and how it wants the world to perceive it. The Academy ignoring decades of cinema by women and people of color doesn’t make those films bad, but it does reveal the ingrained bigotry and systemic wrongdoings of an entertainment sphere that dictates which stories are the most prized. MTV isn’t the cultural giant it once was, and it’s questionable as to how accurate a measure of so-called youth culture it is, but its movie awards are an intriguing glance into how old men in suits perceive its most treasured demographics. If the wind blows in the direction of progress, it would be foolish not to follow.


← 'Manifest' Goes for Broke in Its Most 'Lost' Episode Yet | Review: 'Boys From County Hell' Delivers A Fresh Spin On Vampire Horror →