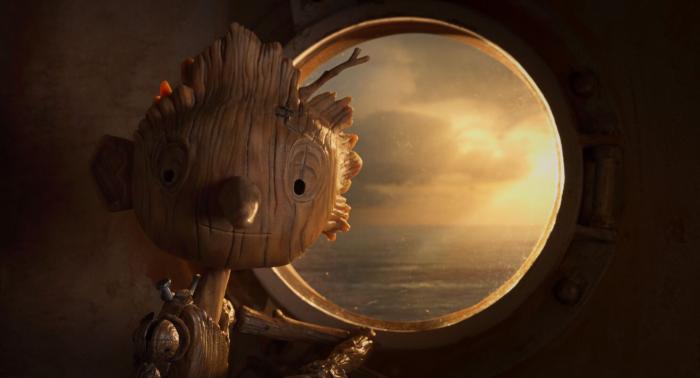 Guillermo Del Toro’s Pinocchio is the second adaptation of the beloved Disney classic that’s come out in the last few months. And true to Del Toro’s repertoire, Pinocchio takes the children’s tale and transforms it into a beautifully executed story about the beauty of mortality.

This darkly whimsical Pinocchio is set against the backdrop of two world wars in the Italian countryside. Geppetto (David Bradley), a carpenter and widower raising his beloved child in a small idyllic town, is emotionally and spiritually decimated in an Up-worthy heartbreak of an opening sequence. He becomes a man consumed with grief, buried in alcoholism, who tears himself apart in the intervening years between world wars. One night in the midst of a bender—incidentally the same night as the arrival of a certain verbose mustachioed cricket, Sebastian J. Cricket (Ewan McGregor in his best storybook, bedtime-story narration)—Geppetto assembles a rough-hewn wooden creature in a fit of violent grief. You’ll never guess what happens next.

The blue fairy is transformed into a wood sprite, (Tilda Swinton, probably appearing in something close to her true form), an extremely Del Toro-ish creature, mirroring a biblical description of an angel with uncountable shifting eyes and an unreadable mask-like face.

Pinocchio’s introduction is some cheerful body horror, and it sets the tone for the strangely delightful nightmare that follows. The titular puppet, voiced with boundless, eager joy by Gregory Mann, is a true innocent … wandering cheerfully into fascist Italy. Along the way, we meet our familiar cast of exploitative characters, Volpe (Christoph Waltz) the brutal circus master and Candlewick (Finn Wolfhard) the ill-fated playmate. Cate Blanchett (!) voices the bedraggled and abused monkey lackey, Spazzatura, in Volpe’s circus. Sebastian tags along desperately trying to parent Pinocchio toward the path of obedience and good behavior.

The shifts from the original story are clearly legible but interesting enough to be at least marginally new. As far as adaptations go, it does the work of taking a predictable and tired story and transforming it into something recognizable yet revitalized. The visual fascination of its stop-motion animation is fabulous and flexible, and it certainly doesn’t come off as a gimmick to resell a successful property (cough cough, something ungenerous about Disney’s live-action Pinocchio remake of several weeks ago, cough cough…).

One small twist arrived in the form of Pinocchio’s immortality: he dies and dies with cheerful abandon, meeting with sphynx-like Death (also Tilda Swinton) who must explain to the child that he is going to watch everyone he loves die. Kids’ movie! Pleasure Island is reinvented as a Nazi Youth training camp. There’s a low-key crucifixion. You know. Kids’ movie! The massive whale of the original movie is kaiju-worthy.

It’s everything you could hope for from a Disney classic in del Toro’s hands. Pinocchio’s quest to be a “real boy” is really a quest to be able to die. Cosmic forces make hideous mistakes, and the grim reaper is really a collection of grotesque rabbits who play poker among the coffins of the infinite dead. And it’s all executed with cheerful, direct humor.

The world of the movie, even through Pinocchio’s innocent eyes, is full of cruelty and horror and bloodshed. Mussolini shows up and gets a laugh. All your favorite Disney characters give a Nazi salute because it’s the normal and appropriate thing to do. And it works. There are echoes of Pan’s Labyrinth, a childlike wonder facing the utter evil of fascist violence. But this is entirely its own story.

And honestly, I really liked it. Whatever I was expecting or wanted this remake of a well-worn story to be, this was better. I can’t say it’s an uplifting Christmas film for the whole family, but it’s certainly a beautiful one, with the kind of darkness and whimsy that a good children’s story inspires. (Nothing close to the pale Pan’s Labyrinth eye-monster, though, no worries on that front.)