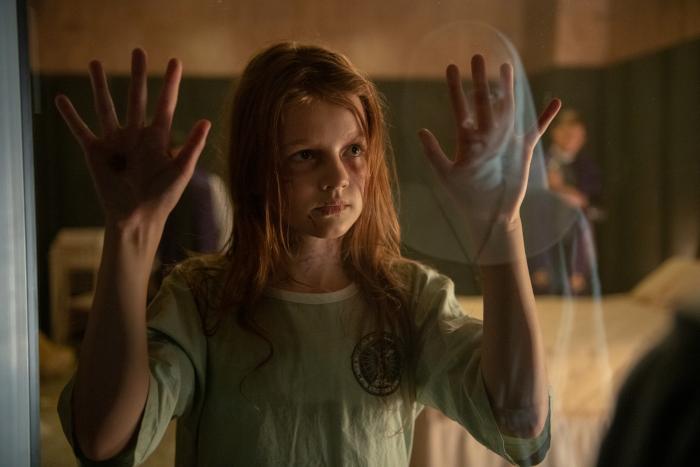 Don't Watch 'Prey for the Devil'

Looking for something scary to watch for Halloween? Don’t watch Prey for the Devil. Want more of a psychological drama? It wouldn’t be the worst choice. For a horror release the weekend before All Hallow’s Eve, Daniel Stamm (The Last Exorcism)’s first film in eight years is a disappointment. While it does attempt to modernize the subgenre with its setting and female lead, it lacks what makes exorcism films so affecting and makes some questionable choices that keep Catholicism’s archaic rule alive.

Exorcism in Prey for the Devil is compared to stepping onto a battlefield. The word of God is the weapon of choice. Armor is a crucifix around the neck, a bible in hand, and holy water ready to fire. A “fight for every soul” is what God’s soldiers have been chosen to undertake. One soldier, Sister Ann (Jacqueline Byers), sees the execution of the rite of exorcism as her calling. Set in 2018, the world is seeing a rise in demonic possessions as Ann seeks out a place at a Boston exorcism school. It’s a macabre study, but as a woman in a patriarchal institution, her education is limited and she’s stuck working as a nurse. Acting also as a psychiatric hospital, the suspected victims of demonic possession undergo evaluations at the school. Like test subjects in a lab, they are observed and examined before the Church agrees to perform an exorcism.

One patient Ann nurses is a young girl named Natalie (Posy Taylor). The bond formed between them is felt instantly as Ann sees herself in the child, having witnessed the devil’s hold on her mother at Natalie’s age. Her determination to help Natalie and ambition to walk to the frontlines of this spiritual war gets her noticed. Her gifts are recognized and she becomes the first nun to be trained in the rite of exorcism. Learning the nuances of the craft has her descend into the mouth of hell where her own past may be related to the current evil she’s trying to eradicate. In the process, she becomes prey for the devil.

We’ve never seen a nun perform exorcisms on screen before, which makes Ann a protagonist that’s intriguing to follow. Grounding the film from her point of view is where the psychological drama kicks in. She carries immense trauma from the abuse she suffered at the hand of her schizophrenic mother. But as she got older, she held firmly to the belief that her mother was actually possessed, which explains her interest in performing exorcisms. Her backstory and the mind tricks that are played on her throughout keep you interested and invested in her story. Byers’ resolute performance is one of the film’s highlights. She evokes a perfect combination of strength and fragility, and we admire her kindness and rebellious spirit. Ann’s trauma is felt through moments of emotion, but she admirably moves past it to break down the walls that have held for centuries.

Byers’ performance isn’t the only one to be lauded. In fact, everyone delivers excellent performances and brings life to this pretty lifeless script. Of note is Taylor who is fearless in her motion picture debut as Natalie. However, the writing of her character is one of the film’s biggest weaknesses. As the film is very Ann-focused, we don’t get to know Natalie’s character at all. This is a must for the subgenre. Thinking of other exorcism films like The Conjuring, the James Wan helmed must-watch allows the audience time to get to know the victim of possession. The before is vital to emphasize the true horror of the deterioration of body and soul. In Natalie’s case, she’s in full possessed mode by her second or third scene. The stakes should be high because a child is a victim, but it’s less affecting when presented so suddenly. It’s also an odd makeup choice to have her appearance change when the devil is present vs when it’s not. The execution of the exorcisms feels gimmicky for cinematics, which also takes away from the emotions these hard-to-watch scenes should evoke. With a better script, we could have felt the stakes and emotions effectively, but instead, we are given an overdone twist that attempts (and fails) to do the job.

Does it have the right amount of eeriness? Sure. The score and old creepy building setting do at least succeed at making us feel like we’re watching a horror movie. There are also some disturbing visuals with small bits of body horror that are appreciated, but that and a few jump scares aren’t enough to scare. It never reaches the desired level of fright. Honestly, it feels like nothing really happens in the first couple of acts. The finale is at least dark, tense, and somewhat thrilling, but it’s all squandered by an odd girl-boss ending.

The scariest part of the film is how miserably it fails to actually make this story feel modern. Despite the glass ceiling shattering and being set in the modern day, it could have easily been set in the same era as Paul Verhoeven’s Benedetta. The way the film speaks of mental illness is heavily stigmatized. Possession and mental illness seem viewed as the same. It’s something to be eradicated, like the Catholic war against heretics in past centuries. There’s also a subplot following a priest friend of Ann’s, Father Dante (Christian Navarro), whose sister was possessed after she got an abortion. Why this needed to be added at this time, or even at all, doesn’t sit well.

The war in Prey for the Devil isn’t only against the devil, but everything that the Church sees as corrupt and sinful. These are values that should be presented as archaic, like the institution itself.


← 'Andor' Gets Crushed Beneath the Empire's Boot in Episode 8 | David S. Pumpkins and Drunk Uncle Shine in 'SNL's Best Episode of the Year →