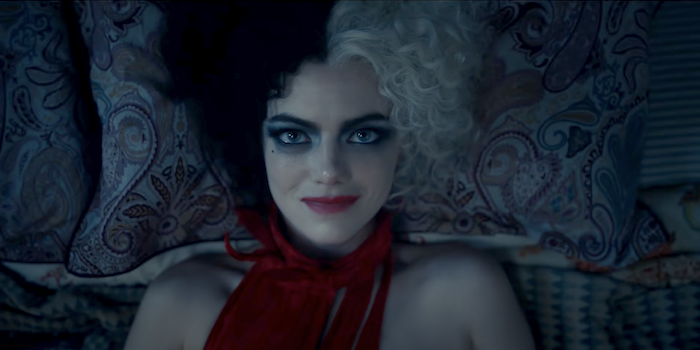 The promotional campaign leading up to Cruella has been a real rollercoaster ride. The very high fashion/no f*cks given first image had us dreaming of a punk diva. Then came the poster, which had a cool vibe but a cringe-worthy use of the “anarchy” symbol like a hip, meaningless flourish. (After all, this is still a big-budget, live-action “re-imagining” made by one of the most powerful corporations in the known universe.) Then came the trailer, which unfortunately made Emma Stone’s smirking villainess seem like little more than a girl-boss spin on Joker.

We’ll find out later this month if Cruella will live up to the critically acclaimed heights of Cinderella or crash-and-burn like Aladdin. However, the verdict is in on the film’s soundtrack: it slays for days.

Set in the 1970s, Cruella boasts a soundtrack that includes songs from Supertramp, The Doors, Bee Gees, Nina Simone, Queen, Blondie, The Clash, and Tina Turner. (If any of these are anachronistic, please note we really don’t care. We’re talking about a movie where a woman casually uses pyrotechnics for a quick change in a gala. Choose your battles.)

However, fresh to the soundtrack and the world is a new jam from Florence + The Machine. The creation of the title track “Call Me Cruella” is a “long-held childhood dream” for Florence, who relished capturing “Cruella’s beautiful madness” in music form.

You can enjoy much of the official soundtrack now, courtesy of playlists on Spotify, Apple Music, Pandora, Youtube, Vevo, and Deezer. But to get a taste of “Call Me Cruella,” you’ll need to check out the latest teaser below:

Cruella opens in theaters and on Disney+ Premier Access on May 28. The soundtrack hits on May 21.