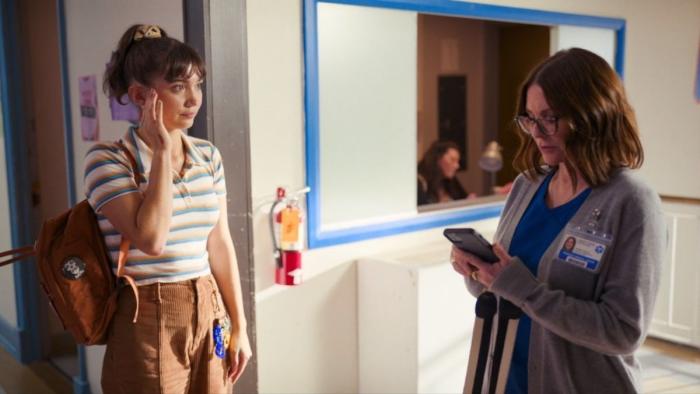 ‘Crush’ Is a Refreshing and Authentically Queer YA Rom-Com

More often than not, YA films tend to be similar to one another. Whether it’s in style, tone, or by having the familiar trappings seen many times before. Then again, how many ways can you write a North American-centered high school experience? What hasn’t occurred often in the past, however, are YA films centered around the queer high school experience. How Sammi Cohen’s Crush presents that stage in life is sure to strike a refreshing cord with LGBTQ+ viewers, young and old.

Written by Kirsten King and Casey Rackham, Crush begins in a way that many YA films do: A vibrant intro sets the mood for what’s to come, as a killer beat accompanies the flipping page of a sketchbook and the spraying of graffiti. It’s an opening credit that fits the film’s protagonist, Paige (Rowan Blanchard), perfectly. Laying on her bed covered by an invisible weighted blanket of angst, she’s presented with three big tasks. The first is to get into her dream school. The pressure is on, and if she doesn’t get into CAL Arts, her future as an artist may be over. She’s struggling with the assignment for her application. She has to draw her happiest moment and she can’t decide what that is — but it may not have happened yet. The second big task is to solve a mystery. Being the only student with keys to the art room, Paige is accused of being “King Pun,” the graffiti artist defacing school property with their witty works. She’s innocent, but the administration doesn’t believe her, and neither do most of the students. If she doesn’t figure out the truth, she’ll be suspended and her CAL Arts dreams will be over.

The third task, and the biggest of them all, is to make her crust fall in love with her. Paige has had a crush on her friend Gabby (Isabella Ferreira) since 5th grade. Gabby likes girls too, but she’s in a relationship. When Gabby walks by, it’s in slow motion, with music playing in the background. This type of scene is frequent in romance films, and the writers here call that out, but it speaks true to pinning over unrequited love. That tingling sensation (presented here in a burst of color) when you’re around your crush, while everything and everyone else disappears is something most have experienced. It brings about loneliness that can feel like the worst in high school especially when everyone around you is experiencing relationships for the first time. To get closer to Gabby, Paige decides to try out for the track team — even though she can’t run. Having myself tried out for the school soccer team all for a crush, being put in the net, and delivering an embarrassingly bad performance, this is a situation all too relatable. It goes better for Paige, though, as she actually makes the team. But instead of getting closer to Gabby, she’s trained by Gabby’s twin sister, AJ (Auli’i Cravalho). The annoyance over this comes out in both of them, with a hint of dislike. The dynamic here is the film’s highlight as they tolerate each other at first, but as they get to know more about each other, this changes into something incredibly sweet. Paige becomes smitten and is now faced with the ultimate dilemma: Which crush to choose.

The kind of “hate turning to love” story is classic and may seem played out, but presenting it in this way here works well to emphasize how alone we feel in high school despite everyone around us going through the same things. AJ is described as mysterious and not one to open up, but as she grows closer with Paige, they learn that they are going through similar pressures. And while the film doesn’t dive into it too deeply, the writers look at how kids of single parents and those who feel they can’t compete with their siblings navigate high school differently. It’s anxiety-inducing to go through the often unexplainable feelings that come out at this time between childhood ending and adulthood beginning, but Blanchard and Cravalho capture them perfectly. They’re also adorable together and bring back all those high school memories and emotions for the audience. The film’s humor is never laugh-out-loud, but it comes out in those scenes that remind you of that awkward time, especially in Blanchard’s performance as she captures all the nervousness that comes with just existing around your crush. Likewise, Cravalho shines with her infectious on-screen presence. The decision to cast queer actresses in these roles is something also incredibly rare for representation on screen, and it adds an appreciated layer of authenticity.

Produced by Natasha Lyonne and Maya Rudolph, Crush may have a predictable twist and some cringe-worthy attempts at adult humor, but it’s a vibrant splash of lighthearted fun. Above all though, it’s refreshing in the way it presents the queer high school experience. Simply, it’s just nice to see so many out queer teens in one place and existing in a world of only acceptance. There’s no bullying in sight and no ounce of shame. Support is everywhere, and it feels good.