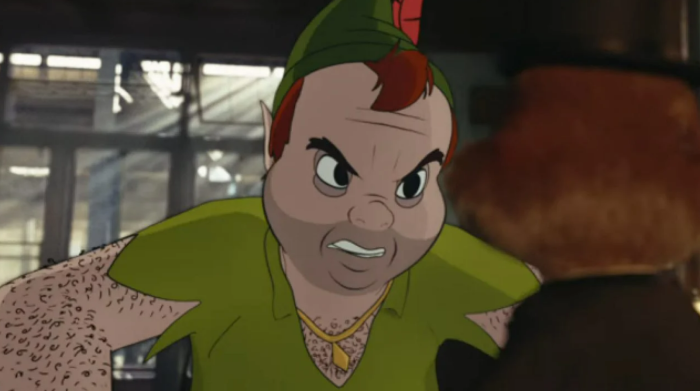 So, Is That 'Chip 'n Dale: Rescue Rangers' Joke Deliberately About Bobby Driscoll?

In its expedition to remake every single part of pre-existing IP in its vast library of content, Disney released its latest live-action (mostly) re-imagining of a beloved nostalgic title, Chip ‘n Dale: Rescue Rangers, on Disney+ last week. Directed by Akiva Schaffer of The Lonely Island fame, this new take on the TV cartoon of the same name includes an all-star cast of modern comedy favorites and has been widely praised for its blend of animation styles, voice acting, and meta-gags. Really, this is maybe the most meta movie that Disney has made in years, often toeing closer to a DreamWorks title than anything from the typically earnest House of Mouse. There are Muppets, Ninja Turtles, Roger Rabbit (an evident inspiration for this movie), fairy-tale characters old and new, and the original ugly CGI Sonic the Hedgehog from the live-action movie who was replaced after fan backlash. The laughs are consistent if you’re my age or older although I’m not sure how this’ll play to its intended child audience. Do they really care about convention circuit gags and the work of R. Crumb? One particular joke, however, has inspired some real questions about the film’s intent and the wider role of Disney in the pop culture conversation.

The villain of the story is Sweet Pete, voiced by an always-game Will Arnett. He’s the adult version of Disney’s take on Peter Pan, now an overweight gangster whose weight is the target of more than a few digs. He had initially been the studio’s darling, their up-and-coming adorable young hero, until puberty hit and he was yesterday’s news. Now he’s hairy and paunchy and running a bootlegging cartoon business. If you’re coming to this film with no knowledge of Disney’s own take on Peter Pan then the set-up seems like an obvious take on how child stars are discarded by the system once they grow up. If you know about Bobby Driscoll, it feels a whole lot darker.

Robert Cletus Driscoll was the voice of Peter in Disney’s take on J.M. Barrie’s classic novel. A child performer from a very early age, he landed his first movie role at the age of five and quickly became a studio favorite at MGM. He worked with Myrna Loy, Anne Baxter, and Lionel Barrymore before being head-hunted by Disney. He was one of the first actors placed under contract by Walt Disney and went on to play the lead child in Song of the South. He and his co-star Luana Patten were called Disney’s ‘sweetheart team’, the perfect child stars for the post-War American big-screen. Driscoll would star in Treasure Island and So Dear to My Heart, both big hits for the studio, and he would even win a special Juvenile Academy Award in March 1950 as the outstanding juvenile actor of 1949. Walt Disney described him as being ‘the living embodiment of his own youth,’ so of course he was perfect for the role of Peter Pan, the boy who never grew up.

But that changed once, yes, Driscoll started to grow up. Disney stopped seeing him as a ‘likeable’ leading man at the ripe age of 16. He had initially been signed onto a contract to 1965, but Disney cancelled it three years early. It was frequently claimed that Disney had problems with Driscoll developing acne as an adolescent boy. After that, Driscoll struggled to get work and was bullied at school for being the Disney kid. He turned to drugs and would later be arrested multiple times for possession. He worked in small parts here and there but never felt able to escape the shadow of being Uncle Walt’s most beloved child star. In 1968, his body was found lying in a deserted tenement building in New York’s East Village. An autopsy determined the cause of death to be heart failure exacerbated by drug use. His body went unclaimed for over a year until his mother tried to find him. He was 31.

Viewers and critics have been arguing over whether Schaffer and screenwriters Dan Gregor and Doug Mand made this joke in deliberate reference to Driscoll’s tragedy. It’s easy to argue either way, to be honest, and your own opinion will undoubtedly be impacted by your own prior awareness of the story. I saw this scene and immediately thought of Driscoll but I don’t expect every kid this film is intended for to know or care. Why would they? Then again, why would they know about 80% of the weird meta gags in this entire movie?

This is hardly the first time we’ve seen this sort of ‘vengeful former child actor’ story in pop culture. There’s a reason such an idea has taken root in our imaginations. It’s not as though we’re short of material either, not when the film and television industries are practically built upon the soul-sucking use of children. The laws may have improved but they haven’t caught up with internet fame and the bombardment of youth exploitation in the name of content. We could be here all day listing the former child stars who struggled with addiction, abuse, and the shame of public mockery over the past century or so. The notion of the degraded child star is a default mode of thinking in our society. We so wearily expect it that it feels more inevitable than botox or reality TV appearances. That’s in part because of people like Driscoll, the most tragic representation of the Walt Disney Company’s commodification of and appropriation of the entire concept of childhood.

Such a dark part of history is clearly ripe for rediscovery and perhaps even some pitch-black satire. The Lonely Island guys could have been the perfect choice for such a story given their piercing and merciless takedown of the music industry in the forever-underrated Popstar: Never Stop Never Stopping. They know how to punch up in smartly stupid ways, which makes me give them something of the benefit of the doubt with Chip ‘n Dale: Rescue Rangers. But great satire is reliant on context, which includes the platform being used. There’s nerve to spitting in Mickey Mouse’s face on his own turf, of course, but how far can you take it when he’s the one signing the cheque? How much can you truly mock the king when he’s paying the jesters?

No studio, or indeed major worldwide brand, maintains as tight a control over their IPs and wider image as Disney. For decades, they’ve strengthened their grasp on pop culture and moulded themselves into the most glowing image of ‘your childhood’ we can imagine. In a world obsessed with nostalgia, nobody has weaponized it more thoroughly than Disney. When they started getting pushback about being too po-faced and not ‘cool’ like their competition (see the entire joke of Shrek), they started incorporating more self-aware fourth-wall jokes into their work. Chip ‘n Dale: Rescue Rangers is very much part of this 21st century trend, a way for Disney to mock itself but not so much that anyone starts asking questions. It’s a roast where the guest of honor gets to pre-approve the jokes. In that context, Disney getting to take jabs at a young man whose life they threw into the gutter? You can see why some would be upset.

If nothing else, I hope this conversation gets people thinking about the late Bobby Driscoll and this horrendous cycle of exploiting kids until they dare to be autonomous beings rather than cute dolls. Disney certainly has no plans to stop using children in this manner.