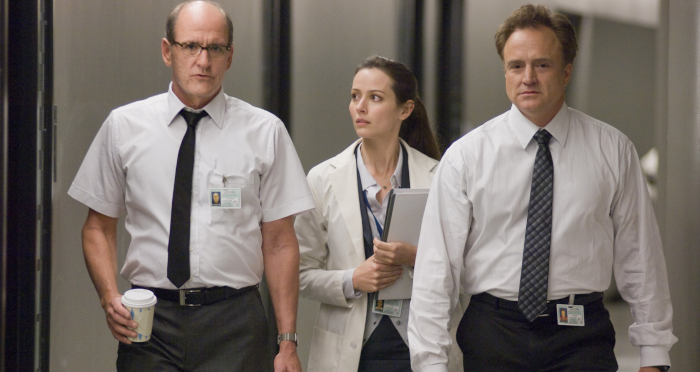 'Cabin in the Woods' As a Precursor to Elevated Horror

The opening scene of 2022’s Scream is a conscious echo of the phone call to the home invasion pipeline at the beginning of Wes Craven’s 1996 original. But this legacy sequel understands that the horror landscapes have changed since Craven and company first established “The Rules” of a slasher genre, and so when Tara Carpenter is asked the inevitable question — “what’s your favourite scary movie?” — she talks about The Babadook and elevated horror; something that’s scary but has Ideas, the semi-serious shorthand for this is to describe all genre films as being “actually about trauma.”

As “elevated horror” has, rightly or wrongly, become more of a fixture in how the genre is defined, there’s an increasing temptation to divide horror into a binary, with the elevated on one end of the spectrum, and “regular” horror on the other, as if there could be no middle ground between one and the other. Enter, Cabin in the Woods, the postmodern slasher that takes what might be thought of as “low” horror and elevates it, but without necessarily presenting itself as being elevated.

Traditionally, elevated horror finds that elevation in the ways in which it uses horror as a way to explore more quote-unquote serious themes; from the family psychodrama that becomes demonic in Hereditary, to the ghostly nature of mental deterioration in Relic. And Cabin isn’t elevated in terms of depth, or using horror as a vehicle for some kind of deeper meaning — although to assume that this is somehow only a decades-old innovation is itself ahistoric — but that doesn’t stop it from elevating the genre itself. What Cabin does is reveal the openness that exists not only in horror but in the act of elevating it.

I saw Cabin in the Woods — released ten years ago, this month — a few times in theatres. When I came out of it the first time, I heard someone remark to a friend whom they saw it with that Cabin was “just a remake of Evil Dead.” While on the surface there might be something compelling about that argument — the titular cabin, the zombies in the woods, the spellbook that summons them — to take that and look at Cabin as a remake is to miss the point of what the film is doing, not only with Evil Dead but with tropes and expectations of horror cinema all over the world.

The best parts of Cabin are the workplace comedy sequences with Richard Jenkins and Bradley Whitford, working as meta-directors themselves, bringing horror to the teens in the cabin, as a way of appeasing ancient, Lovecraftian beings that have existed long before humans walked the earth — and it seems, long after — and it’s through these sequences, leaning into the self-awareness of what a very traditional slasher could look like in the 21st century, that plant the seeds for a certain kind of elevated horror, even if it didn’t quite impact the genre moving forward. In a way, Cabin feels reminiscent of Berberian Sound Studio, another 2012 horror that uses the history and creation of the genre as a way to take it in new directions. Because that’s what Cabin does; by looking at first glance like “a remake of Evil Dead,” the workplace B-plot instead reveals and relishes in the ways in which horror is constructed through tropes, as well as their limitations — in the climactic scene, a character aptly titled The Director (Sigourney Weaver) looks at the terrorised, traumatised teens that don’t fit the stock images her colleagues had in mind, and simply says “we work with what we have.” Cabin is itself a film that borrows from this line and works from what it has; the stock imagery and expectations of a horde of zombies and a cabin in the woods elevated into a commentary on the construction of the genre, one that extends far beyond just the dark night of the soul that these protagonists suffer through. From the Ringu parody to the hordes of supernatural monsters that were almost unleashed on the cabin, this is a film that revels in the lowest, most predictable elements of horror, turning tropes on their heads in a way that doesn’t just feel like sly PoMo deconstruction but a commentary on what this lowness looks like, and how it can be turned into something else.

Cabin, while not being elevated horror in the traditional way, instead elevates horror. One of the biggest precursors to Cabin isn’t even Evil Dead but instead Wes Craven’s Scream, which takes the genre and turns it into something else. Cabin arrived at the dawn of the “elevated horror” boom — It Follows and The Babadook both came out in 2014 — and yet it never manages to appear in conversations around what elevated horror means, and where it can go as a designation (if it needs to go anywhere, or exist at all). There are a lot of problems with elevated horror — its ahistoricism, the elitism around what’s required to take horror seriously — but chief among them is that the idea of elevation itself feels narrow, as if the only way for something to be great or different or interesting — Rogert Ebert tackles this in a 2003 review of The Good, the Bad, and the Ugly — but elevating horror, like the genre itself, is fascinating because of how broad it can be, how open to interpretation the themes and histories of a genre that’s been inseparable from cinema since the dawn of the medium are. To assume that Cabin is just a slasher, or just a kind of experiment in postmodernism does both it, and the genre, a disservice.

By working with what it has, Cabin reveals how strange and hollow its stock image characters are — bringing chemicals into the cabin to make characters dumber, or more aggressive — revealing the lowness of the genre as much as it revels in it. As the body count racks up and the administrators watch on their endless screens, the question of empathy in the genre arises; Whitford and Jenkins are rooting, in spite of themselves, for the final girl. The film asks what it means to root for characters — because that’s what the characters of Cabin become — when their fate is almost certainly sealed (and, in the case of Cabin, when it has to be); it reveals the emotions in slashers, and what happens when they become emotionless. By being more than it appears to be on the surface, Cabin ends up making the case for low horror, for the openness of elevation, and the space for all manner of thrills, chills, and spills, that still deserve to be taken seriously.


← This Version Of the 'Mortal Kombat' Theme Featuring Gilbert Gottfried Is Just What I Needed Today | And Now, Some Shameless Perving Over Alexander Skarsgård →