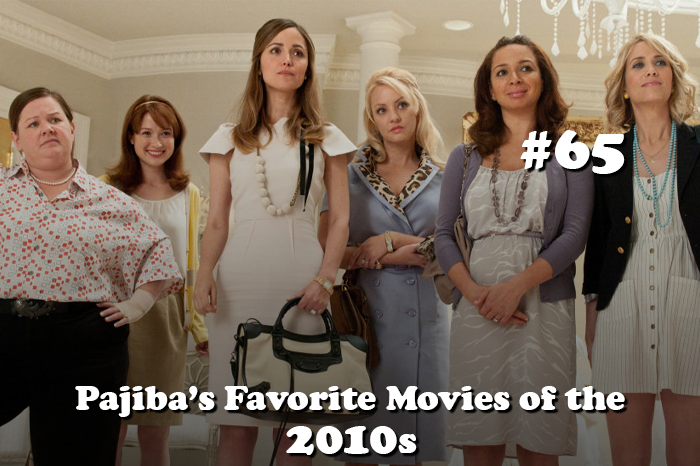 Nobody Has Any Idea What They're Doing, But That's What Best Friends are For

So here’s the thing, I could tell you what Bridesmaids is about or why it’s great or how 8 years out, it’s still effing hilarious, but you should know that by now. I’d much rather explain, using list form, exactly why it’s one of the best movies of the decade. Reasons like:

I feel like we need to get this out of the way first. Is Bridesmaids the female version of The Hangover?

For starters, Bridesmaids is technically set during the preparation for a wedding, but the wedding and surrounding plans are mostly irrelevant to the plot. For instance, there isn’t a bachelorette party. Because Annie takes too many pills and drinks on the plane to help with her flying anxiety (at Helen’s instance, I might add. Because she’s been trying to push Annie out of Lil’s life the whole movie. That bitch), and the plane gets grounded before they get to Vegas. Also, did you notice how scenes and character motivation were set up in ways that seemed more reasonable and less Mad-Libby? That’s because Bridesmaids is better than The Hangover. I don’t feel the need to knock The Hangover any further, but if we’re going to say two movies are the same because they’ve got some people doing something very vaguely related to each other, we should at least be referring to The Hangover as “Dude Bridesmaids.”

I will contend until my dying breath that the only difference between adulthood and not-adulthood is learning how to control your flail. Kristen Wiig as Annie is flailing so, so poorly. This is partly her fault, and partly so not her fault at all that it’s physically painful to watch. Because on the one hand, her bakery went belly up, her boyfriend left her, she had to move out of her apartment and into the apartment of two terrible strangers. But also, JUST GET YOUR TAILLIGHTS FIXED, ANNIE. DAMNIT. She’s in a bad spot, in a way that’s completely understandable, and does everything in her power to make it worse. Like letting herself be treated poorly by a hot guy who isn’t nearly good enough for her. Or being too embarrassed by her financial situation to level with Lillian and the bridal party about what she can afford, and not letting Helen cover the cost of a first-class plane ticket. Or not believing in herself enough to try again at her career. And mostly, by becoming so consumed with possibly losing her best friend to Helen, that she ruins most of her best friend’s wedding events and almost loses her best friend. Which is totally understandable because when things are going badly, people tend to hold on too tightly to the things that are going well. She needed her relationship with Lil to be successful so much that she ruined it.

Also super understandable because, turns out, Helen actually is a total bitch who is trying to steal Lillian from Annie. Annie was wrong to respond to Helen’s passive-aggression the way she did, but she wasn’t actually making up the fact that Helen was trying to take over as Lillian’s best friend. Which is really the beauty of the movie. All of Annie’s problems stem from the fact that she feels like everyone else has figured out adulthood, and left her behind. Lillian by getting married, Helen by being seemingly perfect, even Rhodes by inadvertently reminding her Annie about all of the ways Annie’s failed at being a grown-up. Only Helen’s secretly as insecure and unhappy as Annie is because Helen can’t make friends, and feels like no one likes her (which they probably don’t because you steal their best friends, Helen).

And that’s the real point of Bridesmaids: everyone has no idea what they’re doing, and everyone is unhappy. But things can get slightly less terrible if you believe you’re the person your best friend thinks you are. (Also, don’t call 13-year-olds c*nts. It’s a bad move.)

4) The Cast Kicks All Of The Asses

Kristen Wiig, Maya Rudolph, Rose Bryne, Rebel Wilson, Jill Clayburgh, Wendi McLendon-Covey, Ellie Kemper, Melissa Goddamn McCarthy, Jessica St. Clair, Nancy Carrell, Melanie Hutsell. Along with Terry Crews, Chris O’Dowd, Matt Lucas, Ben Falcone, and the aforementioned Jon Hamm? All of Wilson-Phillips? It’s an embarrassment of comedic riches (although it could maybe have used a few more non-white faces). Admittedly, the fact that there are more women than men did push the “Can women make comedies too?” media narrative that I hated. As though we don’t collectively forget every few years that women have been making comedies for as long as humor’s been a thing. But don’t worry because next year we’ll get Legally Blonde 3, The Witches, and Birds of Prey at which point we’ll get a slew of reaction pieces on “Wait, did you guys know that womens laugh too?!”

5) The Portrayal of Several Different Kinds Of Perfect Female Relationships

Annie and Lillian, and to an extent Annie and Helen, are the central relationship in the movie, but it’s not even close to the most interesting one. Annie and Megan (Melissa McCarthy), Annie and her mom (Jill Clayburgh), and for the love of god, Rita (Wendi McLendon-Covey) and Becca (Ellie Kemper). I would watch an entire movie of Rita and Becca navigating the disappointments of marriage together. Just a full series of Rita teaching Becca about different sweet boozy drinks, and Becca emphatically reassuring Rita of her worth. It’s my worst college friendships in the best possible way, and I just need drunken Ellie Kemper to squeeze my face and tell me I’m as pretty as Cinderella.