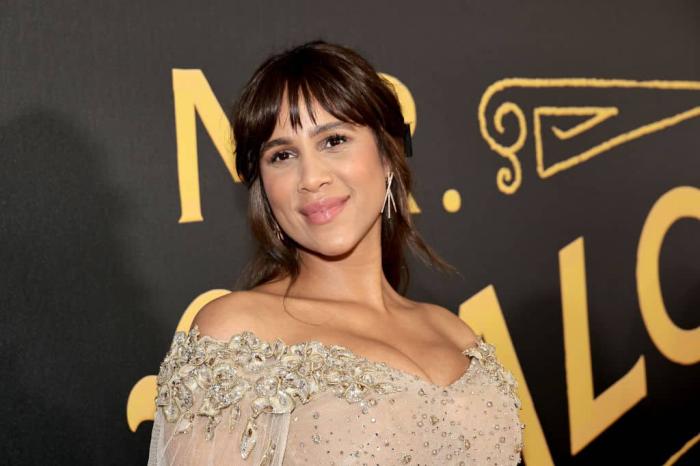 The Tinhatters Are Going After Zawe Ashton for Totally Not Racist Reasons!

Last month, it was revealed that actress and writer Zawe Ashton, who you may recognise from Mr. Malcolm’s List and Velvet Buzzsaw, is expecting her first child with her former co-star Tom Hiddleston. The pair quietly got engaged earlier in the year and have remained low-key, avoiding the spotlight and almost all joint red carpet appearances. This is obviously wonderful news. They’re a talented and attractive couple who seem to make one another incredibly happy and we’re all in favor of love winning the day. Who could be mad about this? Who on this decreasingly green planet would take umbrage with two total strangers settling down and making a life for themselves?

Welcome to the internet, a wretched hive of scum and conspiratorial weirdness.

It’s no secret that Hiddleston is an actor who inspires intense obsession from his fanbase. After leaping into the mainstream as Loki in the Marvel Cinematic Universe, Hiddleston became a fandom darling: an Etonian English gentleman who was as comfortable doing Shakespeare as he was playing a comic book villain. He had a lot of fun playing up the mischief for the public, even as he remained understandably guarded about his personal life. Such precautions were justified as certain subsets of his fandom became increasingly zealous. Once it became clear that he and Ashton were in a relationship, it didn’t take long for the fury to descend upon her.

It takes little time and effort to find Instagram, TikTok, and Twitter accounts dedicated to ‘exposing’ Ashton, mocking her appearance and decrying her as a social climber because of her choice of romantic partner. Everything is seen as ‘proof’ of her supposed crimes, from the way she talks about world issues, particularly race, to claims she’s ‘tacky’ for doing ads for eBay. They’ve added nasty edits to her Wikipedia page and created vast conspiracies that would have put 4Chan to shame. One fan wrote a (now-deleted) open letter to Hiddleston declaring that they were no longer a fan of his because he ‘lied’ to his fans about dating the ‘ugly woman.’ There are a hell of a lot of comments saying that these attacks on Ashton have nothing to do with race, it’s just her they have a problem with. But yeah, it’s all SUPER racist. And dishearteningly predictable.

Hiddleston has been through this before. During the iconic summer of Hiddleswift, when his fleeting romance with Taylor Swift became an internet joke (and one of my favorite moments in celeb gossip history!), many of his fans swarmed social media to assert the narrative that he was somehow trapped in the vicious claws of the singer. They were eager to push the infantilizing notion that a 30-something man was too innocent and passive to make decisions about his own love life. This is a problem we see across fandom, especially as it pertains to those adored white dudes who dare to date someone they don’t endorse (which, let’s be honest, is literally every woman they’re ever associated with.)

No woman is ever ‘good enough’ for the people who hope to live vicariously through a celebrity. These girlfriends and wives are always smeared as scheming abusers who have somehow forced all of these rich men into miserable existences, often through their wily sexuality or fake babies. We saw this with Benedict Cumberbatch and Sophie Hunter, with obsessives claiming his acclaimed theatre director wife was a trafficker who entrapped him with kids who are either realistic dolls or not biologically his. The same thing happened to Amelia Warner, the actress/composer wife of Jamie Dornan. FKA Twigs talked about feeling besieged by racism and misogyny when she dated Robert Pattinson, much of which was tied to the obvious nonsense that was the Robsten ship. And then, of course, there is Meghan Markle, the mixed-race American actress who continues to be demonized by the British press and internet as the modern embodiment of Medea after several years of marriage to Prince Harry. Every little thing she does is elevated to the status of evil, and the racist, sexist, and xenophobic foghorns have bellowed from the moment their relationship was revealed.

Ashton is simply the latest in a long and never-ending line of women being pilloried for dating famous men. It doesn’t happen for all male celebrities (you don’t see Kirsten Dunst getting attacked by Jesse Plemons fans, for instance), but the pattern of those it does occur with is familiar. Think of handsome white men attached to some sort of beloved pop culture property, usually one with a dedicated shipping fandom attached to it. There’s a shameful tradition of this across fandoms, from One Direction to Supernatural to 50 Shades od Grey.

for these women zawe is the worst person in the world and they over analyze anything she does (once again the comments are only from tom fans). pic.twitter.com/OrJJIZmtzC

And the pattern seldom changes. There are always ‘very reasonable questions’ asked by these tinhatters, and it’s never about race or gender, honestly! It’s just that they are somehow privy to the most scandalous and tangled revelations involving schemes by Evil PR to keep our poor helpless adult millionaires from their true loves, and these harpies are always psychologically abusing them to keep them in their place. Ashton’s harassers are following that playbook beat for beat, with extra comments about her appearance, her activism, and her pregnancy. Yes, the ‘fake bump’ crap has started here, just like it did for Meghan. Yes, they’re all claiming she’s now ‘leaning into her pregnancy’ too much, because existing with a literal human inside of you is showing off somehow.

I’m not sure any woman would be ‘good enough’ for this particular strain of Hiddleston fans because their delusions rely on the notion that they could one day have him for themselves, but the fact that he is engaged to a Black woman has fully exposed the racist rhetoric that continues to dominate fandoms. My hope is that Ashton is able to avoid this crap as much as possible. She actually had the perfect response to the furore in a recent interview with the New York Times:

‘As a woman in this industry, you become quite attuned to your identity as an artist shifting in proximity to different people. That’s not specific to dating someone. If there’s a conversation I would have off the back of this question, it’s really about letting women in this industry know that whatever point of career that you’re in, shore up your identity and reason for being, because people will project onto you in the most intense way. When that happens, you have to have an internal anchor. You have to be delighted and joyful in the work that you do. I’m not here to be a victim of projection. I’m here to continually grow as an artist.’