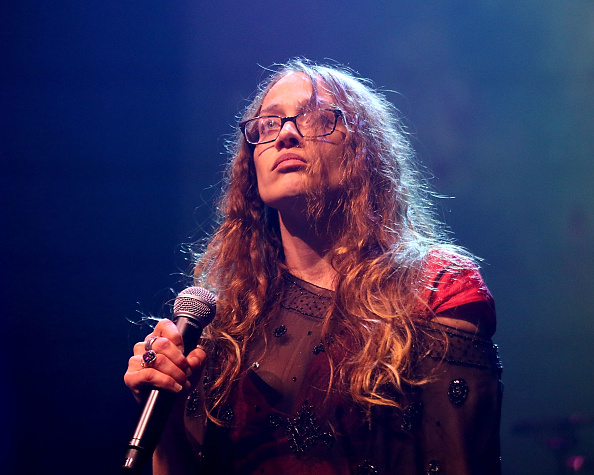 In a video posted July 3rd to the @Fiona Apple Rocks YouTube channel, Fiona Apple announced, via her carrier pigeon-style updates, that she is working on the score for a short film about Court Watching — a program for which she advocates and volunteers.

This — following the land acknowledgement on her 2020 album Fetch the Bolt Cutters (“Made on unceded Tongva, Mescalero Apache, and Suma territories.”), pledging her “Criminal,” “Shameika,” and “Heavy Balloon” royalties to While They Wait, Harlem Children’s Zone, and Seeding Sovereignty, and her 2020 anti-ICE short film — is what frustrated activists mean when they talk about celebrities and artists using their platform to effect change.

Although Apple, sadly, has yet to train crows to deliver messages on her behalf, she has in recent years found a way to engage with her audience sans social media: a fan account on YouTube (@Fiona Apple Rocks). Once a page dedicated to posting all things Fiona Apple, the channel is now interspersed with video messages from the musician herself — messages sent to Simon, the channel’s owner, and posted by him as is. Since 2018 videos have varied in frequency and content: brief Q&As (her roommate Zelda prints out questions from a dedicated email), “Happy Sunday” messages, or videos of her dog.

She chooses questions, or parts of questions, to answer and then riffs on them for a little while, between two and nine minutes, usually crouched down, makeup-free, propping up her phone vertically in a corner. In the rare instance that a video is pre-planned, it’s for one of her aforementioned causes.

Her Q&As are anti-“73 Questions,” non-stylized and unrehearsed (in truth, they capture the essence of FTBC). Can you imagine what the labels demanding their artists “do” TikTok would have to say about Apple’s format-noncompliant videos? It’s not anti-marketing-marketing. It’s Fiona Apple doing her best day to day, hoping everyone else is doing the same. That earnestness — from someone so many associate with understanding themselves in the context of nature and the world — is near impossible to replicate and beautifully idiosyncratic as compared to the governing norms of content strategy. The thesis of her messages (even the snail video)? We’re all connected.

Pivoting from infrequent press and relative isolation to social justice updates via middle man is a natural progression more than—as in some celebrity cases—a transparent PR “pivot.” In a Pitchfork interview, Apple explains trying to improve her skill level on various instruments: “I wasn’t practicing and then recording — I was recording myself while I was trying to get it right.” The same seems to go for her activism: it is learned, then practiced, and applied to her life.

In a 2020 interview with Democracy Now and Seeding Sovereignty activist Eryn Wise, Apple, discussing the land acknowledgment under the FTBC track list, said “Acknowledgment is the first step in a series of a loooot of steps towards healing. Anything: personal or global.” She explained her journey towards activism:

“[Acknowledgment] is so easy, but we forget … Or in my case, we feel stupid, we feel uneducated, we feel ignorant … The first thing I need to acknowledge before I can be any kind of friend or to help in any kind of way, to make a connection. Before I can do that I have to admit I’m ignorant. I’m an ignorant white person and I’ve lived a whole life of privilege and I have no idea what it’s like to not be me … The best thing I can do right now is to say I’ve got time and I’ve got space and I’ve got money and please just talk to me. Let me know. Fill my head. I’m a blank space. Teach me.”

Her plea, “Teach me,” was not in the vein of spoon-fed Instagram graphics and pastel statistics. Rather, she was in search of resources, leading her to become a trained volunteer court watcher through CourtWatch PG (Prince George County, Maryland and the DC Metropolitan area), a program created by Life After Release (LARS), founded and led by formerly incarcerated Black women. The program trains and organizes volunteers to attend bail hearings virtually, documenting the “county’s policies in action [holding] judicial actors accountable for injustice in the court system” (as per their website). She talked CourtWatch PG and LARS in an Instagram post regarding her absence from the Grammys, where she would go on to win Best Alternative Music Album.

I understand that not many artists have the kind of control or even the privilege Apple now exercises. But it is refreshing to watch her apply not just her money but her talent and time to causes that her music ultimately mirrors.

Following the official Dobbs decision, Apple — wearing an all too familiar nightmare news-cycle pulled-up hoodie — took the week off Q&A-ing to offer her shared anger and her support to people feeling hopeless, scared, and mad: “Let’s not let them make us forget they [SCOTUS] also took away Miranda Rights … What I’m going to do is give money directly to abortion and to bail funds … I’m just one of a lot of women who need to keep on expressing that we do not fucking accept this.”

Hoodie down, Apple’s July 3rd video offered a meditation on remembering good feelings before informally addressing a question regarding whether she would write songs about court watching: “Not specifically about CourtWatch, no. But I do think my experience court-watching over the last year and half has opened me up to so much that I didn’t know about before, that I think that if I do write songs again, hopefully-hopefully it won’t be from such a myopic perspective … I would feel good about that.” I think her answer is proof of the artist’s growth and commitment to the steps that come after acknowledgment.

Later in the video, Apple talks about how she offered herself and “the other bolt cutters” (her band) up to do the score for an upcoming short film about CourtWatch PG, in an effort, hopefully, to lend not only her art but her fan base to a project that sheds light on the advantages of virtual court and the impact of court watchers. She closes the video with a reminder that there are court-watching orientations every Wednesday morning.

The celebrity-activism relationship is, generally speaking, garbage: pre-strategized and meticulously worded. However, in a world where there is a person who curates the books celebrities are seen with, it can be hard to gauge how authentic any one pledge or condemnation is. The crux of Fiona Apple the artist, the activist, the gal who prefers alone time is authenticity. She shows it in her lo-fi videos, the peeks into her process through Zelda’s Instagram, and through her journey as an activist.