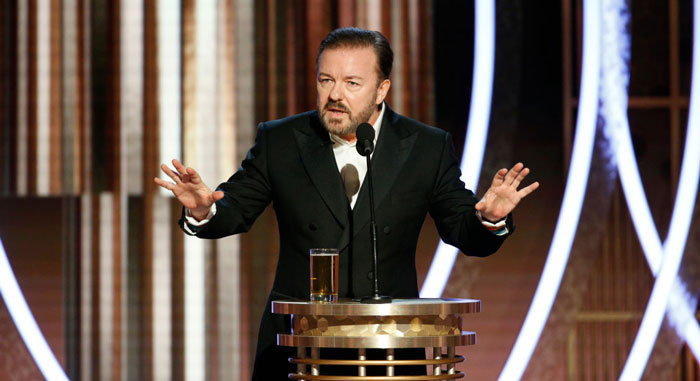 Last night, the Hollywood Foreign Press celebrated the 77th Annual Golden Globe Awards with five-time host Ricky Gervais. The once-provocative comedian promised in promos he’d be exactly the kind of irreverently fun MC for which this convivial and quirky ceremony is known. Yet Gervais’s Hollywood-skewering schtick proved stale and toothless, which made the funniest parts of his opening monologue the celeb reaction shots to jokes that weren’t landing.

Gervais doesn’t care about the star-studded award event he’s been paid to host five times. He’s so sick of these rich, powerful Hollywood elites who sip champagne as the world burns that he’ll sip beer and not wear a tie! How shocking! Lucky for Gervais, he also doesn’t care when punchline after punchline is met with silence or Tom Hanks’s dropped jaw. The typically giggle-happy Gervais couldn’t even be bothered to chuckle at his own jokes.

You know who’d dress up AND be funny at the same time? ⬇️ https://t.co/q5wsU0SxMX