'Til the End of the Line... Or Not: Sebastian Stan Shades 'Endgame' Conclusion for Stucky

Shots have been fired. Sebastian Stan — known best to Marvel fans as Bucky Barnes, aka Winter Soldier, aka Steve Rogers/Captain America’s best friend — posted a story to his Instagram that indicated he was less than enthused about how things turned out for his character and, in particular, what wound up happening to Steve and Bucky’s friendship.

But, let’s start at the very beginning, as I’ve always heard that’s a good place to start. Over on Twitter, the official UK and Ireland account for Marvel Entertainment posted an image of Steve and Bucky circa their days as soldiers in World War II. The caption read: “Together until the end of the line.”

Someone replied to the tweet and sounded bitter about the “bad, inconsistent” writing for Steve. If you recall, Avengers: Endgame left Bucky hanging in the present while Steve left both him, Sam Wilson, and the rest of the Avengers to live out the rest of his days in the past with his old sweetheart Peggy Carter. So, it was more like “together until the end of the lie,” according to the reply.

Sebastian Stan quietly posted a screenshot of the exchange to his Instagram, adding the wide-eyed, shock-faced emoji. Though he didn’t add any further comments, fans took it to mean that he agreed with the response and that he also believed Steve left Bucky hanging. 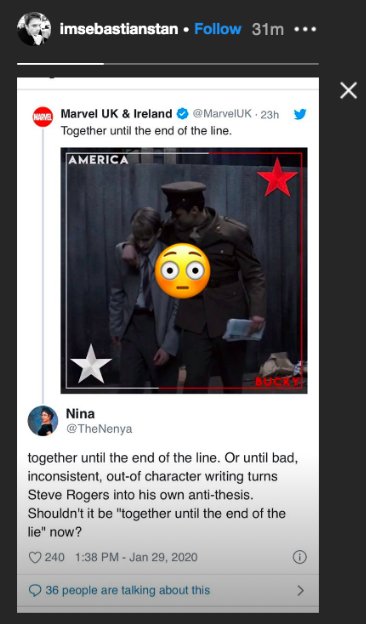 In an interesting turn of events, John Boyega tweeted in support of Stan, welcoming him to the club of voicing displeasure with a character’s arc with a cackling Palpatine gif. (Boyega had previously been dragged for expressing distaste for Finn’s storyline in Star Wars: The Last Jedi.) Check out Boyega’s tweet below!

← The CDC Does Not Recommend A Plastic Jug On Your Head To Fight The Coronavirus | Linda Hamilton Would Like to Be Done with 'Terminator' Now, Thanks →