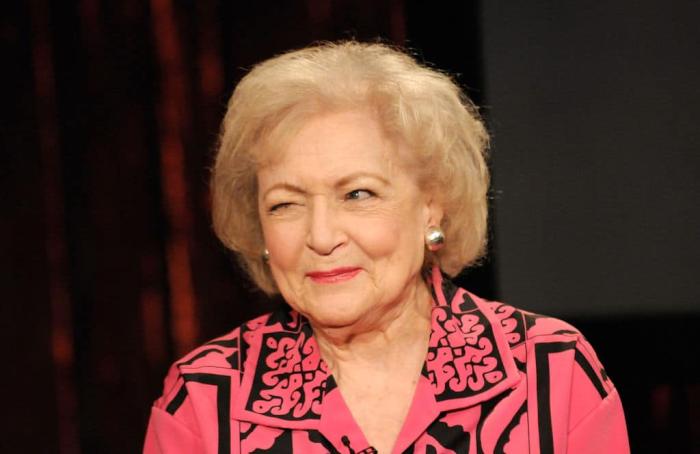 The Last Golden Girl Goes To Her Rest: A Tribute to Betty White

2021 had one last kick in the teeth for us yesterday when Betty White passed away at the age of 99. She was just two weeks shy of her 100th birthday. People Magazine had planned to celebrate with a cover story this month.

Betty White dying three weeks before she turned 100 is the final act of performer whose timing was always sharp, always unexpected, and even with the warmest of characters, always a little dangerous. No one else could live to 99 and so perfectly leave us wanting more.

Betty left behind an enormous and lasting footprint as part of the history of television with her remarkable 70-year career. Most known for her roles as the dippy Sue Ann Nivens on The Mary Tyler Moore Show and the equally dippy (but just as beloved) Rose Nylund on Golden Girls, she was also a staple on the game show circuit. She met her husband of 18 years, Allen Ludden, when she was a guest on Password, which he hosted.

She also hosted her own daily talk/variety show on NBC in 1954. It was short-lived but, according to internet rumors, it went out in a blaze of anti-racist glory.

Let us not forget that in 1954 Betty White’s show was canceled shortly after receiving backlash for her refusal to cancel Black tap dancer, Arthur Duncan. She extended his airtime instead, and responded to racists with “I’m sorry. Live with it.” pic.twitter.com/Fi6pFqSdXx

She anchored a Golden Girls spin-off that aired briefly and also starred Don Cheadle, who remembered her on Twitter last night.

betty was the best of the best. when we were shooting scenes together it was difficult for the DP to get the lighting right between my chocolate and betty's white! she was either a ghost or i was the shadow. i came on set one day and betty had darkened her make up/hair a bit in

Most recently she was part of the ensemble for TVLand’s Hot In Cleveland, which ended its five-year run in 2015. In 1999 she played my favorite of all her roles: The very grumpy, mildly profane, alligator-feeding widow in Lake Placid.

Besides being an iconic mainstay of our pop culture lives, Betty was also a fierce advocate for animal welfare (the previous clip notwithstanding). According to People, she began working with the Greater Los Angeles Zoo Association(GLAZA) in 1966 and joined the Board of Trustees in 1974. She contributed to zoo exhibits and created a 1974 TV special that spotlighted the zoo’s animal care team. In 2006, Betty was honored as the City of Los Angeles’ “Ambassador to the Animals” for her lifelong work for animal welfare. She was later named an honorary zookeeper by the Los Angeles Chapter of the American Association of Zoo Keepers.

Betty White worked with a lot of people and touched a lot of lives during her time on earth. She was remembered fondly across the entirety of the internet last night as we counted down to the new year. No one will miss her more than her handsome ex, Ryan Reynolds. We might want to do a welfare check on RR. He is not OK.

The world looks different now. She was great at defying expectation. She managed to grow very old and somehow, not old enough. We’ll miss you, Betty. Now you know the secret. pic.twitter.com/uevwerjobS

I met Betty White several times over the years, in many green rooms. She was a vanguard who paved the way for women in TV. Now we say goodbye to her irrepressible presence, and like millions of others, I will miss her. Thank you for all the joy and laughter, Betty ❤️ pic.twitter.com/XTxLaVFTlw

During my 2 seasons on Golden Girls, I only spoke to Betty White once. 20 years later she came in to "Family Guy", I walked up to her and said "I'm sure you don't remember me…" and she said "Of course I remember you, David Goodman! I loved the writers!" No one better. RIP.

She was a true master of her craft and there are hundreds of clips to support that. But this one is chef’s kiss.

this betty white scene from golden girls still never fails to make me happy, 30+ years later. betty improvised most of the story and bea and rue couldn’t help but lose their composure and slip out of character. RIP to a comedy queen. pic.twitter.com/uQ0N9jTWE9

Even America’s coolest president knew what was up.

She made us laugh. Thank you Betty White. RIP. pic.twitter.com/d6XeLrlnm1

RIP Betty White! Man did I think you would live forever. You blew a huge hole in this world that will inspire generations. Rest in glorious peace….you’ve earned your wings ❤️❤️❤https://t.co/7wpeLHgySy

She could hang with the best of them.

And gosh, she was a radiant beauty, worthy of Pajiba 10.

Another piece of the best of American culture is gone now.

Dead? You fools. She has sailed into the West, and will remain Betty White.

But, she is well remembered and will never be forgotten. Thank you, Betty White, for all of the laughs we had along the way.

Dying hours before New Year's Eve ensures that Betty White will have more toasts made to her memory on the day she died than just about anyone in history. She always was a master of timing.


← HBO's 'Landscapers': Where Murder and Fantasy Collide | 5 Shows After Dark: 'Around the World in 80 Days' Premiere PBS, 'Next Level Chef' Premiere Fox →