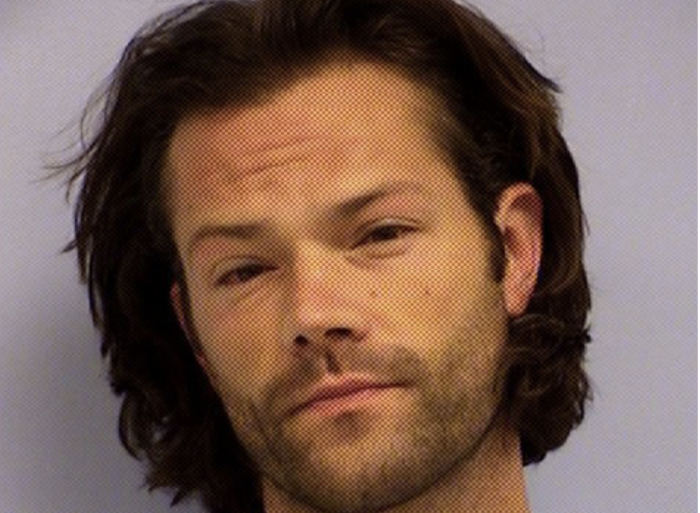 Supernatural star Jared Padalecki was arrested last weekend for allegedly assaulting a bar manager and the bartender. Oh, and there’s a count for public intoxication, too. That’s right, in the fifteen long seasons that the CW show has been on the air, Padalecki’s record has been pretty spotless, with rarely a negative peep about him or co-star Jensen Ackles. So, the arrest and assault charges definitely came as a surprise. Though Supernatural’s production continued undisturbed and the actor was released on bond, Padalecki did have to miss a Supernatural convention in Washington, DC this past weekend because of what happened.

Naturally, the actor took to Twitter (as he usually does) to send his love to the fans, thank them for their support, and write that he was “so sad” for not being able to attend the convention. Y’know, because of that pesky arrest and all. On the surface, it sounds like your average celebrity tweet, but because everyone knows Padalecki was arrested, reading his sadness over not being at the Con just made the elephant in the room that much more apparent.

I want to sincerely thank my family and friends for all of your love and support. So sad to miss the #SPNFamily at #dccon but I hope to see y’all soon. ❤️

And, here’s the thing, this was the first time Jared Padalecki had said anything at all after his initial arrest, which happened outside of Stereotype Bar in Texas. Nowhere in the tweet did he bring up his arrest, apologize for it, or address what happened. That’s fine, I guess, since he’s probably not allowed to for legal reasons. What’s not cool is to thank fans for their love and support without saying why. It just makes it sound like everything’s all well and good when we know it probably isn’t.

It leaves a bitter taste in my mouth knowing that Padalecki, who has always seemed like a nice enough person, hasn’t yet apologized for his behavior. He can’t really deny it either since some of his actions were caught on video (released to TMZ) and several reports corroborated his actions. It’s unclear whether Jared Padelecki, who’s set to headline the CW’s Walker, Texas Ranger reboot, will ever acknowledge what happened publicly, but it’ll probably be super awkward until then.