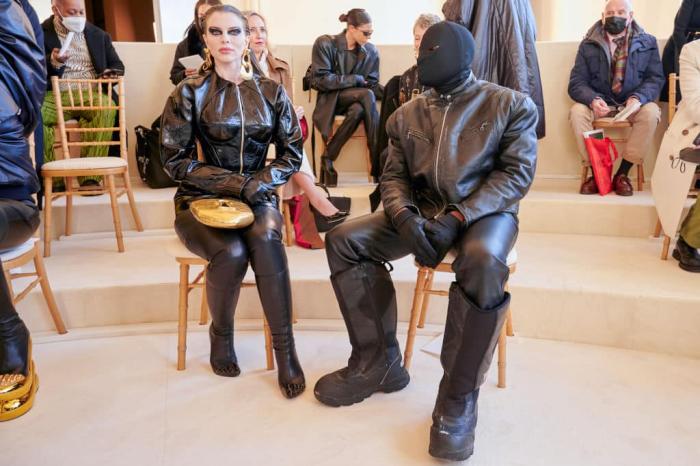 So, What’s the Deal with Julia Fox and Kanye West?

For the past few weeks, Kanye West has been dating the actress Julia Fox, who is best known for her performance as Adam Sandler’s mistress in Uncut Gems. The pair was immediately hot and heavy for the press, posing together in matching outfits for fashion week and putting on grand performances of arthouse love for Interview Magazine. Fox has giddily detailed the relationship for said publication, including how West dictated her clothing choices and directed an entire photoshoot for her at a restaurant where they ate on their second date. She’s already chosen a portmanteau for this beautiful new romance: JuliYe.

Julia Fox has revealed the couple name for herself and rapper boyfriend Kanye West as JULIYE pic.twitter.com/5TQE6ntpnO

I’m admittedly a sucker for bombastic celebrity performativity, having grown increasingly tired of faux-relatability from multi-millionaires for the sake of audience comfort. Yet I can’t say that I’ve found the Fox-West show to be especially entertaining. I’ve laughed, don’t get me wrong, especially when poor Fox had eye make-up that was seemingly borrowed from the Nightman in It’s Always Sunny in Philadelphia. Mostly, though, I’ve been kind of perplexed or bored by it all. It’s giving me all of the celebrity nonsense I typically devour with zeal but there’s nothing here that sates me. It’s all so solemn and self-serious.

She also just keeps talking. She has no filter via PR control or a harried studio hoping their latest star won’t sink their ship. Fox didn’t call ‘no comment’ when her relationship with West gained traction in the press. She gave interviews to the hip NYC press. She chose the JuliYe couple name (FoxYe sounds more fun to me but sure.) She’s building her own myth and not even being subtle about it. How can you be when you’re hosting a podcast where you let everyone in on your ongoing troubles with the father of your child? She’s already admitted to being a fan of the Kardashians while insisting that she’s not with West for the fame because ‘I’ve dated billionaires my entire adult life, let’s keep it real.’ It’s a statement that is simultaneously savvy and not as self-aware as she thinks it is.

Not only did I predict that Julia fox’s eye makeup was Kanye’s idea but he also did it himself 😂😂 pic.twitter.com/U21neXfvoK

Talking about Kanye West is a perpetual minefield of issues, from his well-documented Trump support to his mental illness issues to his treatment of his own wife. Famously, when he started dating Kardashian, he went through her wardrobe and threw out everything that didn’t meet his standards, thus reshaping her entire image for over a decade (I don’t think it’s a coincidence that, post-split, her style has gotten more irreverent.) On their second date, as Fox giddily recounted, ‘Ye had an entire hotel suite full of clothes’ with which he dressed her up. She described it as a Cinderella moment. A lot of us just saw a pattern of behavior, with Fox’s new fashion looking like it came straight out of Kim’s wardrobe four years ago.

It’s also tough to watch Kanye walk around with his new beau and not think about Kim Kardashian, mostly because he makes it impossible to do so. At the Free Larry Hoover concert West co-headlined, he dedicated the song ‘Runaway’ to his now ex-wife, singing, ‘I need you to run right back to me, baby. More specifically, Kimberly.’ When he’s not trying to publicly beg his former spouse for a reconciliation, he’s been accusing her of relying on nannies to raise their four children and making enough of their private lives public to make even the Kardashians wince. TMZ, a gossip rag with Kris Jenner connections, recently claimed that West was spreading rumors that Kim’s current beau, Pete Davidson, was suffering from AIDS. It’s all messy, to put it lightly, and watching him open-mouth tongue Fox for the cameras as she dresses like a proto-Kim only makes it more awkward to watch. That’s the key difference between JuliYe and, for example, Megan Fox and Machine Gun Kelly. Both couples are playing parts for the cameras, but the latter seem to be enjoying themselves, having fun with the process. There are no gears for them to grind with this circus. For Fox and West, it really feels like something less buoyant is going on.

A relationship like this feels designed to burn bright and fast. It’s a show with a limited run and I’m pretty sure Fox knows that. For all the talk of how much she’s personally or professionally benefitting from this romance, she really doesn’t have much to lose if it all goes tits up. She’ll share all the dirt in a podcast, keep hanging out with New York micro-celebs, maybe pop up in another Safdie Brothers film, and just keep doing what she’s doing. Maybe it will lead to her receiving more regular press coverage, but I don’t buy the claims that Kanye West of all people can catapult her into Hollywood A-List shine. As for Kanye, he’ll just keep doing what he’s done consistently and thoroughly for many years now: grab headlines in frequently uncomfortable ways. Remember, this is the guy whose Presidential run is mired in sleaze that included incidents of trying to pressure election workers into confessing to bogus charges of fraud. There will always be a solid contingent of West fans and media figures who will hang onto every word and substandard song he bellows with rapturous awe. The ‘genius’ label has shielded him from much over the past decade. Maybe another girlfriend will come along, another beauty who’s willing to wear whatever he wants and listen on the sidelines as he sings another song about how his wife should take him back.