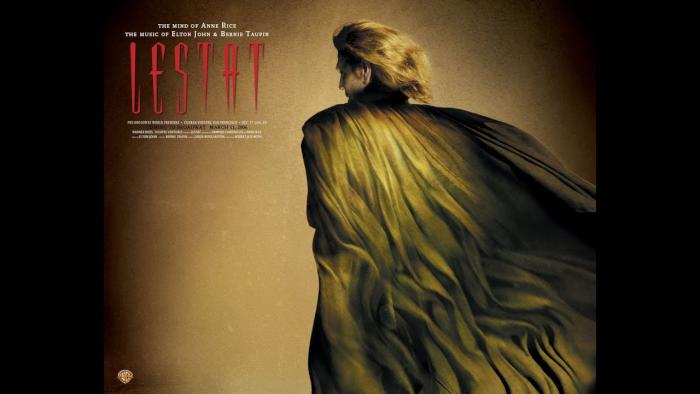 Remember When Elton John Made a Flop Broadway Musical of The Vampire Chronicles?

AMC just debuted its long-awaited TV adaptation of Anne Rice’s Interview with the Vampire. Spoiler alert: it’s great! Seriously, I am a die-hard fan of Rice’s Vampire Chronicles, to the point where I have a shelf in my house dedicated to them, and the series entirely exceeded my lofty expectations. You can find my review here, and I heartily recommend you check the show out, even if you’re a total novice to one of the biggest-selling book series of all-time.

It’s notable how, despite the vast popularity of the novels, there have only been two cinematic adaptations. One, the Neil Jordan take on Interview with the Vampire, is a wonderful piece of gothic cinema that succeeds even though it’s uniformly miscast. The cash-grab version of Queen of the Damned is boring, bears little resemblance to the source material, and is made watchable only by the presence of Aaliyah. For many years, that was really all we had. So much of the series remained untouched, so much potential left untapped. We never got to see Lestat’s mother Gabrielle, or his past with his first love, Nicolas. We certainly didn’t get the more bananas part of the series, from the total re-imagining of Paradise Lost to the stuff with the aliens. We can only hope the new AMC series digs into some of the bonkers themes that Rice made so delicious.

Of course, if you’re in the know, then you’ll be aware of the Vampire Chronicles adaptation that nobody talks about. Well, how do you even begin to approach one of the biggest musical flops in Broadway history?

Yes, there was a Vampire Chronicles musical called Lestat. Yes, it was composed by Bernie Taupin and Elton f**king John. Yes, it lasted about a month on stage and shuttered following terrible reviews and dismal box office. And yes, I am kind of obsessed with it. Of course I am!

The duo of John and Taupin are iconic in the world of music. Name an award and they’ve won it. You can probably sing a number of their songs by heart without even thinking about it. Both also had history in the world of musicals. By the 2000s, John had already worked on several musicals, most famously The Lion King, both the film and the stage show. In 2000, he wrote the music for a Disney-produced musical version of the opera Aida, with Tim Rice on lyrics duties, which won him a Tony Award for Best Original Score. Later, he would work on Billy Elliott, another big award winner, and the upcoming adaptation of The Devil Wears Prada. But he’d never before worked on a musical with Taupin, who was apparently a huge fan of the books. He’d even tried to to secure the stage rights to the first book many years prior. So, when Warner Bros. decided to get into the Broadway game with the Vampire Chronicles, they found a songwriter eager to get to work. He recalled in an interview with The Baltimore Sun, “I said I would do it, providing it was done with a great deal of taste and that it wasn’t turned into a campy joke, and so long as there were no dancing vampires.”

Side note but one of the shows that Warner Bros. initially worked on for Broadway gold was a Batman musical with Jim Steinman of Bat Out of Hell fame. Admit it, you’re kind of sad this doesn’t exist.

Taupin worked with Linda Woolverton, the screenwriter for Beauty and the Beast, to get a grasp of what is ultimately rather tricky material. Most of the books take the form of biographies of various vampires that chronicle their lives over the centuries. They hop between styles and genres, and often eschew action for philosophical angst. It’s a lot to take on, so they initially decided to focus on the events of the first and second Vampire Chronicles book, albeit chronologically rather than the original publication order. Most of the first act is dedicated to Lestat’s origin, with the second act bringing in Louis and the vampire child Claudia. All in all, it’s about 700 pages of plot, character, and history squished into two hours of song. There’s a reason the new TV series is taking seven episodes to tell only the first book. You can’t fault John and Taupin for ambition. You can fault them for everything else.

The show, titled Lestat, had its out-of-town run in San Francisco, where it broke box office records for a new musical. Reviews weren’t as kind but nobody saw the show as unsalvageable. The point of the out-of-town run is to see what works, change what doesn’t and prepare for the harsh lights of Broadway. Warner Bros. wanted this to succeed in the hopes that they could adapt other major IPs for the theater. So they poured a lot of resources into it. By the time Lestat arrived on Broadway it was a very different show. By Taupin’s account, the Broadway version of Lestat was about 65 to 70% changed from its San Francisco run. While the broader strokes of the plot remained the same, some scenes were expanded, the extravagant production values toned down, and all references to Queen of the Damned and Akasha were eventually removed. That makes sense given that Akasha’s backstory is that of the entire origin of vampirism and would probably be worthy of its own two-hour show (and this was before Rice added the aliens stuff!) So, the new show was a little more stripped back but kept its focus on Lestat, who was played by Hugh Panaro, a long-time Broadway Phantom (the show definitely really wanted what Phantom of the Opera had.)

Lestat opened on Broadway at the Palace Theater on March 25, 2006. Reviews were, to put it kindly, bloody awful. And pun-laden. Newark Star-Ledger said Lestat was “just deadly.” Ben Brantley of the New York Times said the show was “the musical sleeping pill […] Dare to look upon Lestat and keep your eyelids from growing heavier and heavier and heavier.” And that is the big problem with the show: it’s boring, almost impressively so. Clearly, everyone involved got caught up in trying to capture the languid sensuality of Rice’s prose without understanding that paying customers expect a little bang for their buck. Where Rice’s books are immersive, the musical is fleeting, unable to take a moment to breathe with a scene or character because it has so much stuff to cram into a short running time. Moments that should be dramatic land with a thud, like the death of Claudia.

It doesn’t help that this version of Lestat is kind of a drip. Gone is the charismatic brat prince who is alluring and infuriating in equal measure. Here, he’s petulant but not especially appealing, more like a teenager who’s been told to go bed early than the most dashing of vampires. Few of the other characters fare any better, except for Gabrielle. Long one of the most underrated vampires in the series, Lestat’s mother has a fascinating arc where she evolves from adoring mother and wallflower noblewoman to half-wild nomad who styles herself as a man. Actress Carolee Carmello has a blast with the role and even got a Tony nomination for her troubles. It’s kind of a shame that Gabrielle doesn’t get more to do in the musical or the books. In a series of novels that frequently plays around with ideas of gender and sexuality, Gabrielle’s story is one of the most fascinating takes on this. Alas, she never got her own book (only one of them has a female POV narrator.)

It may simply be that vampires don’t work on Broadway, at least not in musical form. The Frank Wildhorn adaptation of Dracula was a flop, as was the infamous English language version of Tanz der Vampire. That show was such a disaster that its Wikipedia page reads like an autopsy by a coroner who hated the deceased. Seriously, there’s a subsection titled ‘Casting Michael Crawford, 9/11, and other disasters.’ Ouch! Terrible show. Go watch the German version instead. Lestat became the third vampire musical flop. Maybe the trends had shifted and vampires were on the way out. By 2007, even Rice had stopped writing about them, publicly abandoning the fanged undead in favor of stories about Jesus following a born-again return to the church (she eventually left Catholicism and went back to vampires.) It’s easy material to play for camp, but also much easier to play totally seriously and accidentally land on silly. If you don’t 100% buy the fantasy then it crumbles before your eyes and it felt like even the show’s creators didn’t get it. Rice’s work is earnest to a fault and you have to be as clear-eyed about her world as both a reader and creator. Taupin and John seemed lost in her stories, their music nowhere near as baroque or overwhelming as it needed to be. Perhaps this should have been an opera.

Lestat closed on May 28, 2006, after 33 previews and 39 performances. It never made back its investment. The Original Broadway Cast Recording was recorded by Mercury Records on May 22 of the same year, but Elton John’s management stated that [‘there are no plans to release the recording at the present.’ If you’re so inclined, you can find bootlegs for various iterations of the show on YouTube. If you’re intrigued by pop culture failures and have a high tolerance for boredom, give it a go. There are some solid songs but don’t think too hard about it being an Anne Rice adaptation. Mercifully, we now have the adaptation fans have waited too long for. Let’s not squander this opportunity, people!