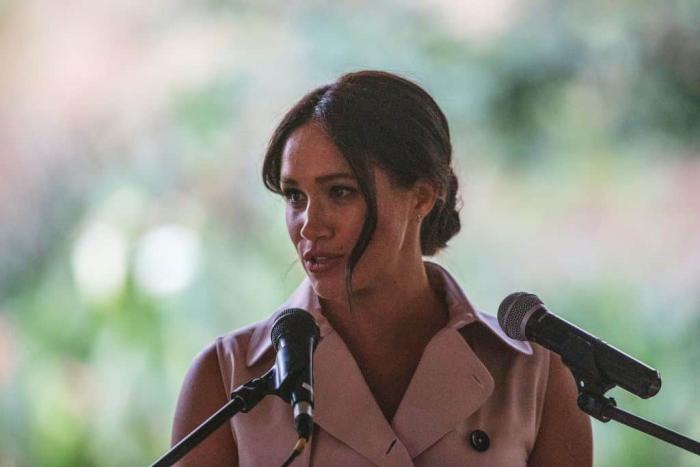 Christ, I hate this man.

It’s a well-known fact by this point in time that Meghan Markle’s white family members are sh*tty human beings in almost every conceivable way. They’re callous, narcissistic, exploitative, and willing to do anything to make a dime off their stranged relative’s name. Her half-sister is self-publishing a memoir that promises to ‘reveal’ the secrets of a woman she had basically no contact with for the majority of her adult life. Now, her genuinely nasty dad is back at his usual tricks.

Thomas Markle, who you may remember as the man who staged paparazzi pics before his daughter’s wedding and now appears on every cheap platform open to him to publicly bully her, must need more money now. According to The Sun, he’s ‘making a documentary film about his life.’ What a prize. Thomas already made a documentary with Britain’s Channel 5 last year, but that wasn’t enough. Now, he says, a new documentary will offer a more ‘complete’ picture of the woman who clearly wants nothing to do with him. He says:

‘It begins with my life, my family, my love of theatre and television, and how I got there. Then my life with Meghan, growing up, her school days until she went off to college, and when her career began. We had a good life together, up through her first marriage and her move to Canada. Then a new story begins! It’s kind of like, “What happened to my baby girl?”’

Oh gee, I wonder what happened to the independent woman with a high-profile career who decided she didn’t want to keep in contact with the guy who keeps pulling this sh*t. Tis a puzzlement.

A reminder that Meghan is currently embroiled in a legal battle over invasion of privacy relating to a letter she wrote her father that somehow ended up in a major newspaper.

Markle also says that his new documentary will feature previously unseen home movie footage of Meghan, which is only surprising in that I’m shocked he hasn’t already tried to flog it to the Daily Mail or Piers Morgan. It’s so sleazy that he’s trying to sell this as some psychological insight into ‘what went wrong’ with his daughter, a woman who has done nothing wrong and continues to be a worldwide punching bag for the media, racists, and her own damn family. And he keeps getting airtime because the British press is so irrevocably toxic that they’ll do anything to keep fuelling these fires. ‘Perverse’ doesn’t even begin to cover it. I’m torn between wanting Meghan to sue the f**ker and never acknowledging him again for as long as he lives. He did this to himself, him and his vile other daughter.

Death to the monarchy, but also f**k off forever to these creeps.