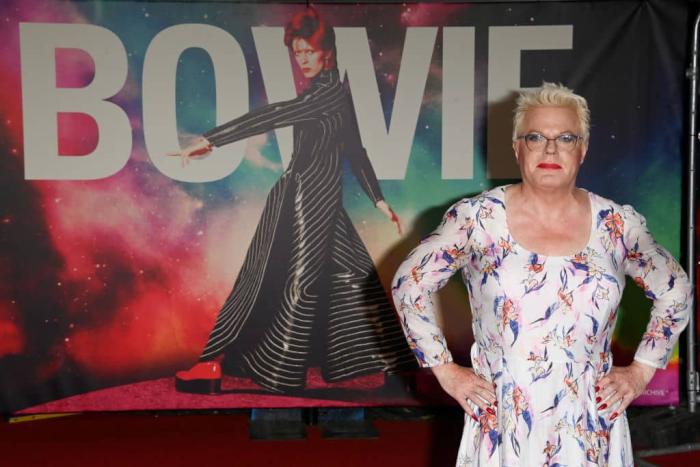 I wish I could fully explain how Great Britain, this weird island I call home, became a hive of bitter transphobia seemingly overnight. It’s one of the few aspects of this country that truly baffles not only me but my family, friends, and curious outsiders watching us sink into oblivion via social media. We’ve always been a dishearteningly conservative land, late to the game on major societal change, but the virulent pushback to the slightest signs of progress toward transgender rights has proven to be especially upsetting. Just look at Joanne Rowling’s Twitter feed for proof of that. Today, the transphobes’ target of choice, after driving Graham Norton from the platform for giving the most reasonable response ever to a loaded question, is Eddie Izzard.

Izzard is an undisputed legend. Actor, comedian, writer, activist, and all-around lovely person, Izzard recently announced plans to run for the Labour Party vote in the constituency of Sheffield Central. Izzard has talked about entering politics for many years now, in between running multiple marathons, performing award-winning stand-up, and being eaten by Hannibal Lecter. She’s a star. Yes, she. In 2020, Izzard started using she/her pronouns. This isn’t much of a surprise to anyone who has paid attention to Izzard’s career for the past 40 years. Indeed, it’s fair to say that Izzard might have been many people’s first experience with the notion that the gender binary is awfully silly and not to be taken seriously. While she previously referred to herself as a transvestite, Izzard started using the term ‘trans’ to describe herself several years ago, and often joked that she was ‘a lesbian trapped in a man’s body.’

Language evolves and so do people, and this is how Izzard lives now. This shouldn’t be a big deal in the slightest. How on Earth could it be a surprise that Eddie Izzard is trans, unless you’ve spent the past 40 years stuck in the Death Star canteen? It’s not. But it is, alas, the new faux-outrage target for the TERFs who think any sign of fluidity of gender and sexuality should be compared to sexual assault. I don’t want to spend too much time giving website space to the bullies who have relentlessly targeted Izzard. They don’t deserve it. But I do think it’s worth highlighting how their harassment of a national treasure and long-time LGBTQ+ figure exposes the true agenda at the heart of their ‘gender critical concerns.’

Jean Hatchet, writing for The Critic, detailed how she and other transphobes photographed Izzard leaving the women’s toilets at a Labour Party event. It didn’t seem to enter their minds that maybe, just maybe, hanging around outside a public bathroom to berate someone and make them a target for hate isn’t a moment of grand feminist activism. As she and her goons worked overtime to link Izzard’s desire to pee to a form of gendered violence, plenty of voices on Twitter stood up for Izzard. Perhaps it’s because she’s famous and her name brought attention to an issue faced by many trans people that there was such support for her. This is who the transphobes want to make the eeeeevil face of their campaign? The beloved comedian who does tons of charity work, has one of the best reputations in the industry, and makes jokes about dancing horses? That Eddie Izzard?

Izzard has long been quietly pushing boundaries but she’s also a popular and ‘safe’ figure. Her comedy has never been mean or interested in smarmy provocations. She’s always existed in the public eye as someone who dressed in whatever clothing she wanted and expressed her identity as one outside of the cishet norm. Indeed, much of her comedy is focused on her reflective but deeply funny relationship with gender. Yet she’s never been one to fully rock the boat politically. She’s center-left, not exactly a flag-waving communist, and she even defended Rowling by saying she didn’t think the notorious transphobe was transphobic (but she totally is.)

And that’s what’s at the heart of this hatred. It’s yet another reminder that there is nothing that trans people can do to be accepted by the ‘gender critical’ ghouls who have made denying their existence a full-time job. They don’t want to see your point of view. They’re not interested in learning or listening to your lived experiences. There’s no such thing as the ‘right’ way to be trans, according to them, except to simply not be trans. They don’t want any non-cis people to exist. If they did then why would Eddie Izzard of all people, who is popular and hard-working and has spent decades living a trans life, be hounded in this manner simply for using she/her pronouns?

I hope Izzard is not beaten down by these losers. She has allies in her corner, including Central Sheffield Labour, where she’s running. If only more MPs would speak out. Transphobia is, alas, seemingly the only true cross-party policy in this hellhole. She’s also keeping busy with the hundred other things she does, because sleep seems to be a foreign concept to Izzard. Transphobia won’t stop her. It hasn’t for decades.