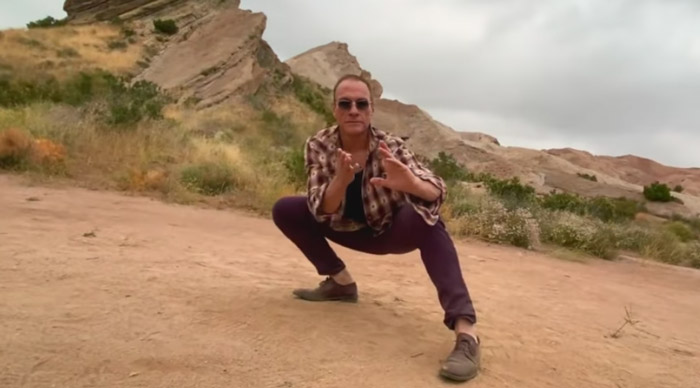 Why Yes, Jean-Claude Van Damme Has Released A Music Video. You're Welcome.

Jean-Claude Van Damme might be best known for a slew of ’80s action films like Double Impact, Double Team, and Bloodsport. But there is more to this Belgium tough guy than his incredible muscles, eye-popping splits, and unbridled sexual allure. The 59-year-old star displays a softer side with the new music video, “ULTRARÊVE.”

You might think you’re ready for what awaits you when you hit play. Trust me. You are not.

Okay, so now you probably have some questions. Like is AaRON the car’s name? In the Youtube vid’s captions, it reads, “An original idea by AaRON.” So was this video the car’s idea?

I’m sorry you tragically uncool fool. AaRON is the name of the French pop duo who created this song then had the brilliant idea to have Van Damme dad-dance to it after fondling a car.

Made in these tricky times, the production was a family affair. The action icon’s son, Kris Van Damm, served as cinematographer, while daughter Bianca Van Damme took the helm as director. Who choreographed this masterpiece? No choreographer is listed. So, we’re assuming that was all JCVD.

AaRON’s Anatomy of Light is out now.