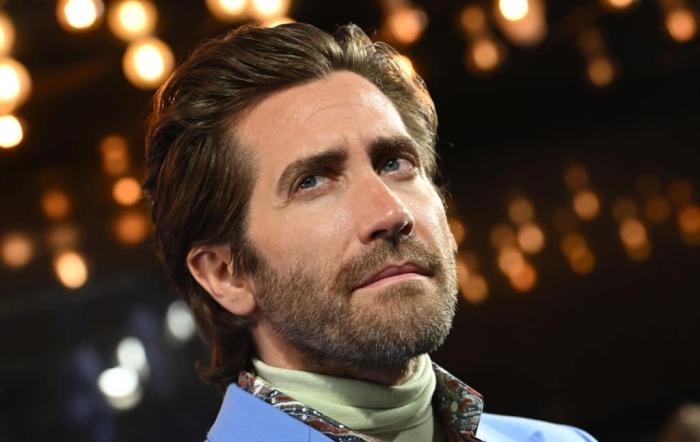 Jake Gyllenhaal seems to be keeping busy. A quick gander at his IMDb page reveals no fewer than 11 projects in pre-production. Even for a prolific actor, that’s a hell of a lot of long-term planning for a major star. Where Gyllenhaal’s contemporaries — Oscar Isaac, Joaquin Phoenix, Adam Driver — are lucky to have two, maybe three, films or series in the pipeline, Maggie’s brother has way more commitments up his sleeve. I’m a Gyllenhaal fan so news like this would usually be up my alley. Yet the projects themselves seem oddly samey. There are a LOT of action films in there, from a Guy Ritchie movie (OK, I am excited for that one as Pajiba’s in-house Ritchie defender) to something titled The Anarchists vs ISIS. The most recent addition to the punchy roster is a remake of Road House, co-starring MMA fighter and all-around a**hole Conor McGregor. That last project is certainly unexpected. You don’t usually expect Oscar-nominated actors with intense reputations to be putting their names to remakes of ’80s action films.

The Road House remake just started production, with Gyllenhaal taking to Instagram to announce the news alongside ‘the ridiculously talented [director] Doug Liman’, whom, he says, he’s wanted to work with for years. It’s as good an excuse as any for me to dive into a topic that’s intrigued me for a while now.

Gyllenhaal’s career shifts over the past couple of decades have been fascinating to me. He has oscillated so frequently from weird indie dude to muscle-bro that I’m surprised it isn’t commented on more. We’ve spoken a lot in recent years of actors who try to straddle the space between prestige and commercial viability and how extremely rare it’s become to see someone successfully pull off both areas. Charlize Theron can do it. Michael Fassbender couldn’t. Being part of a big franchise can provide a helping hand but even some of Marvel’s most beloved stars couldn’t headline a solo action title outside of that cinematic universe (sorry, Hemsworth.)

Many moons ago, when Gyllenhaal was gaining steam as an acclaimed actor with his sole Oscar nomination under his belt for Brokeback Mountain, he had his first stab at being an action-leading man. The film was Prince of Persia: The Sands of Time and it did not go well. He certainly looked the part and put on an appropriate amount of muscle but the film itself was a misfire for many reasons. The action wasn’t well choreographed or shot; the story didn’t do justice to the source material; Jake Gyllenhaal is decidedly not Persian. He didn’t seem necessarily uncomfortable in the role but it still felt like an ill fit for an actor who is capable of so much more. As with many actors before and after him, the rigidity of this leading man model softened his sharper edges.

Clearly aware that this direction was not the best one for him, Gyllenhaal pivoted back to being the weirdo of Donnie Darko fame. He enjoyed a strong streak of acclaimed performances in the likes of End of Watch, Prisoners, and Enemy, culminating in the career peak of Nightcrawler. Looking thinner and more sickly than he ever had before (he dropped about thirty pounds for the role of a sociopathic cameraman), Gyllenhaal was untethered from A-List expectations. That he was able to pivot so seamlessly to character actor grit is certainly a privilege (after all, he is a hot white dude) but it still felt like the right decision for his work. There are enough blockbuster bros out there. Let us have this one, right?

Even with people in the most privileged of positions (hot cishet white guys who can act and lift weights), the entertainment industry doesn’t encourage much in the way of a varied workload. Those agents want their 15% and they’re not going to get it by sending their clients scripts for arthouse fare where they make SAG scale. Gyllenhaal may simply want to take advantage of the current post-John Wick boom of action-oriented star vehicles that offer a more stylistic bent on the genre amid the sea of franchise fare. It certainly helped to reassert Keanu Reeves’ popularity, and the likes of Charlize Theron, Bob Odenkirk, and Brad Pitt followed suit to mixed results. This isn’t a genre defined by youth anymore. Its most adored leaders are at the age where Hollywood would typically be retiring them to craggy grandparents and the villain behind the desk. These films offer a chance to reveal a kind of physicality that is far more varied than the action scenes of the current superhero cinema era, and they focus heavily on the actors themselves doing the grunt work over stunt performers. That’s not to say that, for example, Keanu is doing every fight scene in John Wick but it’s easier to buy the illusion that he is than it would be if he were masked up in a Spidey-suit. For all the shifts that the genre has made, watching tough people hurt others and blow sh*t up never goes out of style. I get why Gyllenhaal would be excited to participate in this.

Yet Gyllenhaal’s most interesting success in this genre wasn’t a movie where he showed off his delts and saved the day. It came in Ambulance, the Michael Bay action-thriller where he played, to put it mildly, an irritating a**hole. He plays Danny, a life-long criminal who coaxes his brother Will into helping him with a major bank heist that quickly goes awry and turns into a city-wide chase. The hero is Will, played by Yahya Abdul-Mateen II. Gyllenhaal is a villain but he’s so astonishingly brash and annoying that he can’t even be labeled a proper antagonist. Gyllenhaal is excellent in a role that feels like it would usually be played by John Turturro or Willem Dafoe. This is Gyllenhaal reveling in his weirdness as a guy who never shuts up and is unapologetically crazy, even if he lacks the long-term planning abilities to be effectively so. Imagine his Okja character if he was packing heat. This is the Gyllenhaal that makes the most sense to me: the total oddball and not the stoic man with delts and a mission.

Perhaps he’ll find the quirks amid the seemingly traditional roles he’s overloading his CV with right now. They’ll provide a solid payday and let him play toe to toe with the franchise big boys. He has suffered a few career setbacks thanks to COVID (the planned West End production of Sunday in the Park with George) and Bradley Cooper (the Leonard Bernstein biopic.) It might just be easier to take what’s happening here and now, and have some fun with it. But don’t stay away from the madness for too long. At the very least, give us a Sack Lunch Bunch sequel.


← 'Only Murders in the Building' Delivers Yet Another Delightful and Bloody Romp | How Do You Recommend a Show Like Apple TV+'s 'Five Days at Memorial'? →