“Bad Guy” singer Billie Eilish is rocking a new look of late, which she debuted at the 2019 LACMA Art + Film Gala Honoring Betye Saar And Alfonso Cuarón Presented By Gucci last weekend. In the back, her long dark locks roll down her shoulders. But in the front, her hair’s been cut much shorter, like long bangs that slide down the sides of her sunglasses. And on top, she’s got a splash of bright green dye. TMZ is calling this “a big ol’ mullet,” and they bombarded Eilish at an airport to ask if she was trying to “start a trend” by bringing the notorious haircut back into the spotlight.

The 17-year-old singer seemed genuinely shocked, answering, “Mullet? What do you mean a mullet? That’s so mean!” She then laughed and shared the 411 on her new ‘do: it was an accident.

Listen, you know what happened? Somebody dyed my hair and they burnt half of it off. So now it looks like a mullet. But that sh*t is not on purpose though. I’m growing that sh*t out!

Here’s the video of the above:

Billie Eilish has a perfectly good explanation for her new mullet pic.twitter.com/EgioB67W76

First off, hair accidents happen, especially to teen girls trying new hair tricks. Who among us hasn’t had a run-in with overbleaching, curler burning, or impulse bang-cutting? Upside, Eilish will likely feel really seen by Greta Gerwig’s new adaptation of Little Women. (Although we’d have pegged her as more of a Jo than a Meg.) Secondly, props to Eilish for turning a makeover mishap into something edgy and fun! She made this mistake werk.

Finally, TMZ—and a slew of other sites—needs to get it together. That’s not a mullet. By definition, a mullet means business in the front and party in the back. This is more like chill group-hang in the front. A mullet needs to be SHORT in the front, not just shorter. By TMZ’s definition, every woman rocking bangs with hair longer than a pixie cut is wearing a mullet. You want some legit mullets? Watch Joe Dirt, go to a hockey game, or peruse my family photo albums for my dad’s haircut from 1980-2001. It’s an easy distinction to make.

This is a mullet: 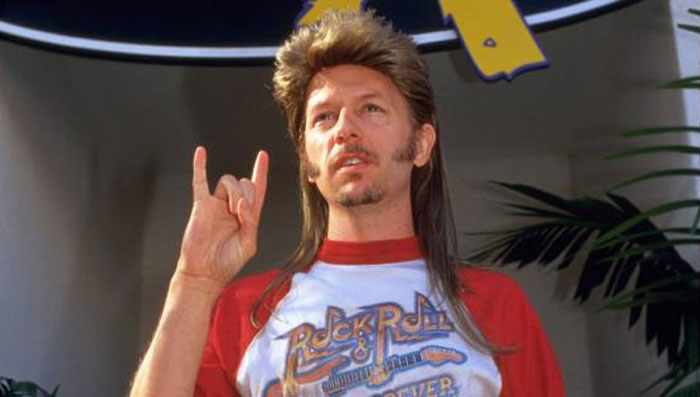 THANK YOU @gucci FOR HAVING ME

Not a mullet. And how dare you slander Eilish in such an impertinent fashion!

← If Warren Gets the Nomination,. Bill Gates Won't Rule Out Voting for Trump | Chris Evans And Paul Rudd Join Billy Eichner On 'Billy on the Street' →