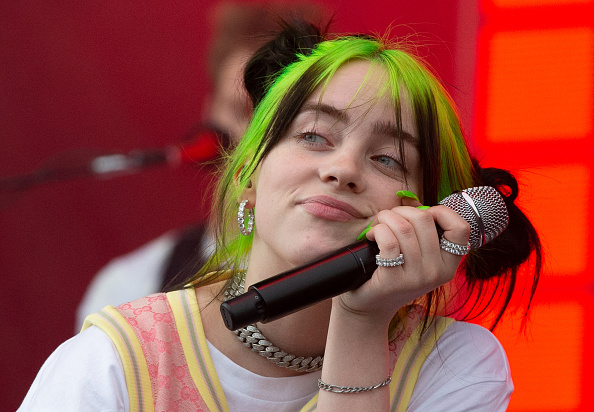 Women Can't Win By Your Rules, So F*ck Your Game: Billie Eilish Takes Off Her Shirt, Reveals The Industry's Hypocrisy

It’s been a week for women. The last major female contender for the Democratic Presidential nomination (do not Gabbard me) dropped out, and then had the gall to spend a few hours being funny and having fun. And when another incredibly prominent female politician expressed her delight at Warren dancing in a tweet, her mentions turned into a full-blown disaster zone. And before you think that this is me attacking one group of political supports, please know it’s fucking everybody as Miranda Hobbs Cynthia Nixon has already reminded us (NSFW because women’s bodies are inherently dangerous, I guess).

I have to admit, I find it particularly ironic/apt that one of the main characters on a show that glorified and advocated for the idea of women Having It All is now at the forefront of pointing out what complete bullshit that idea is. Women can’t Have It All, but that’s because no one can Have It All. Framing anything less than existence in which one person is responsible for maintaining a hugely successful career and family life while having enough time and money to practice self-care and have a close group of friends as a personal moral failing/refusal to just start doing meth already keeps the pressure on the individual woman to just. keep. working. in order to be happy and fulfilled. It isn’t society’s fault that you’re overworked and underpaid and can’t afford decent childcare. It’s because you just won’t keep to a schedule.

It’s bullshit and it’s always been bullshit, but we’ve also believed it for way too long. The rules were always set up so that the house could change them whenever they saw fit. Whatever it is that you were doing wasn’t the right thing, and that’s why you didn’t get that promotion/boyfriend/presidential nomination. We’ve known for a very long time that the rules on women’s behavior were too rigid. That we had to walk the very fine line between being bossy and a pushover, being stupid and being a know-it-all, being a prude and being a slut. And for far too long, we’ve been working on making that line wider. We just wanted everyone to agree that some of our behavior was okay so that we could figure out a way to operate within the rules. We just wanted them to be fairer.

The real answer was always: fuck your rules.

.@BillieEilish showed off her body in visuals during an interlude at her concert in Miami. pic.twitter.com/zhj3lHNH4b

“You have opinions about my opinions, about my music, about my clothes, about my body. Some people hate what I wear, some people praise it, some people use it to shame others, some people use it to shame me, but I feel you watching always and nothing I do goes unseen. So while I feel your stares, your disapproval or your sigh of relief, if I lived by them, I’d never be able to move. Would you like me to be smaller? Weaker? Softer? Taller? Would you like me to be quiet? Do my shoulders provoke you? Does my chest? Am I my stomach? My hips? The body I was born with, is it not what you wanted? If I wear what is comfortable, I am not a woman. If I shed the layers, I’m a slut. Though you’ve never seen my body, you still judge it and judge me for it. Why? We make assumptions about people based on their size. We decide who they are, we decide what they’re worth. If I wear more, If I wear less, who decides what that makes me? What that means? Is my value based only on your perception? Or is your opinion of me not my responsibility?”

Billie Eilish, who’s talked openly about her body dysmorphia, has been as targeted as she has been celebrated for her clothing choices. Because she was ashamed of her body when she shouldn’t have been but actually she was taking control of her body by refusing to commodify it but there’s no reason why she should feel the need to cover up when she doesn’t want to but she shouldn’t wear any clothes that don’t make her comfortable and oh yeah, f*ck, we’re doing it again.

The fact is, kids these days (and yes, that’s how I’m legally obligated to refer to them) have figured out a thing that we in the older generations haven’t yet: the rules were not set up to show us how to win. They were set up to keep us losing. We cannot reason with the rules because the only reason for them is “You’re not doing good enough.” We can’t beat the house. F**k the game.