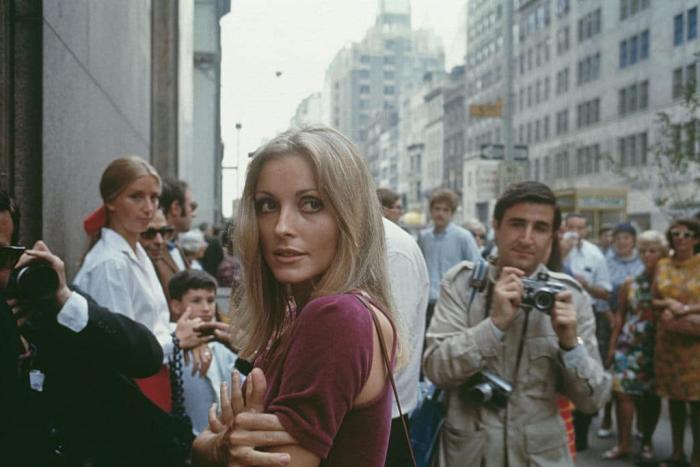 The Work, Legacy and Tragedy of Sharon Tate

When you think of Sharon Tate, what first comes to mind? Do you think of the movies she made, or her marriage to Roman Polanski, or her famed beauty? Or do you think of how she died? The chances are that the latter is what defines your knowledge of the actress. How could it not? After all, she was the most well-known victim of one of the most shocking crimes of the 20th century. Fifty years ago, a bunch of drugged-up hippies manipulated by a wannabe Rockstar named Charles Manson killed seven people in a bloody spree that left Hollywood petrified and, as Joan Didion famously wrote, signaled the end of the ’60s. Tate, who was eight months pregnant at the time, was only 26 years old. In the ensuing decades, she has been defined as a tragic icon, an enduring sex symbol, an excuse, a cautionary tale, and very occasionally, her own person. When it was revealed that Quentin Tarantino’s latest film, Once Upon a Time in Hollywood, depicted her mostly as an ethereal concept, it wasn’t a surprise. That’s what she’s been for five decades now.

Watching Sharon Tate movies now, with all the accompanying baggage, can be a very strange experience. She only made six movies and appeared in a handful of television series, often uncredited. Most of these projects weren’t well-received in their time either, although a couple of them have been reappraised as camp classics. An army brat who moved around the country and spent some time living in Italy, she had been defined by her stunning beauty from a young age. When she started acting, producer Marty Ransohoff, who had signed her to a seven-year contract, put her in a dowdy brown wig for a recurring role in The Beverly Hillbillies in an attempt to downplay her looks (it didn’t work).

Her first two movies, Eye of the Devil and The Fearless Vampire Killers, both, to varying degrees, played heavily off her beauty. In the former, she plays a witch while in the latter she is a vampire count’s most prized victim. She’s all presence in Eye of the Devil, a perfect burst of modernity in a creaky movie. In The Fearless Vampire Killers, directed by and starring her future husband Roman Polanski, she is shameless set dressing, an item to be desired and fought over. The movie is supposed to be a pastiche of Hammer Horror, but Tate’s character subverts none of the schlocky sexism of those movies. It merely reinforces it. To promote the film, Tate posed for Playboy. Polanski photographed her.

For better or worse, Tate’s cinematic magnum opus is Valley of the Dolls. Based on one of the all-time best-selling works of fiction by Jacqueline Susann, the novel was a phenomenon in its day and the movie one of the biggest box office hits of 1967 (it made more money than the James Bond movie of that year). Reviews, however, were less kind. Most critics, including Roger Ebert, wrote it off as an overblown soap opera, and Tate’s performance as a minor thing not worth much consideration. It’s since been reconsidered as a camp classic, in large part because gay audiences wholeheartedly embraced its unconscious freneticism, but it’s also a movie that holds up as a project of substance. It’s not as full-on as the book — I’ve no idea how they could have done that in 1967 — but its insights into the exploitative cycle of fame and its degradation of women still feel eerily prescient. It’s also a sharp meta-commentary on Tate herself. As Jennifer, the chorus girl who is seen only for her body, Tate gives a performance that keenly conveys the weariness and crumbling confidence that comes with being objectified 24/7, to the point where you become brainwashed by men’s opinions of yourself. Neely O’Hara, as played by Patty Duke, might be the character who gets all the gif-ready diva moments, but it’s Tate who grounds the story in something painfully real.

For a brief time, Tate and Polanski were the It Couple of Hollywood; she an ultra-modern girl of her time and he a rising star in the era of new cinema, separate from the crumbling studio system. Photographer Peter Evans later described them as ‘the imperfect couple. They were the Douglas Fairbanks/Mary Pickford of our time […] Cool, nomadic, talented, and nicely shocking.’ Imperfect was the right word. Tate wanted a traditional marriage while Polanski thought her eagerness for monogamy was a drag. He, by his own admission, cheated on her constantly. One Tate biographer claims that Polanski coaxed her into threesome and sexual scenarios she was uncomfortable with. He even had an affair with one of her best friends, Michelle Phillips of The Mama & the Papas. When she fell pregnant, Polanski wanted her to have an abortion. In his autobiography, Polanski would lavish praise on his pregnant wife’s beauty while also admitting he had no desire to have sex with her until her body returned to normal.

After completing what would be her final movie, Twelve Plus One, Tate joined Polanski in London, where he was prepping a movie, then she returned to Los Angeles on the QE2. Polanski asked his friend, Wojciech Frykowski and Frykowski’s girlfriend, coffee heiress Abigail Folger, to stay at their home with Tate to ensure her safety. Two weeks before she was due to give birth, Tate, Frykowski, Folger, and Tate’s former boyfriend, hairdresser Jay Sebring, spent the night at 10050 Cielo Drive. Everyone knows what happened next.

As with all celebrities who die young and/or tragically, a large part of what we mourn and obsess over is the loss of potential. We think endlessly about what could have been, what should have been, and what will never be. It’s especially poignant with Tate because she was so consistently underestimated during her lifetime. Reviews took little notice of her acting but happily gawked at her body. Her movies seldom gave her much to do as a performer. She never got the chance to show them wrong or be reappraised in the way many other Hollywood sex symbols did. She also never got to be defined by anything beyond her looks and her death.

Lurid horror movies turned her into another Final Girl, without the dignity of escape. Pop culture history left her as that untouched sex symbol, the kind of woman to be looked at and one who never needed to be listened to again. For Polanski defenders, following his drugging and raping of a teenage girl, she was the perfect excuse for his behavior, the embodiment of his lifelong trauma that gave his fans carte blanche to justify his horrors. For true crime nerds or lovers of Hollywood history, she was yet another dead woman (a dead blonde at that) to strengthen imagined lore.

The true strength of her legacy lies beyond what Hollywood wanted to make her. Following her death, her mother Doris and her sister Debra worked tirelessly for the rights of crime victims and were instrumental in a court decision that amended California criminal laws relating to the rights of victims of violent crime, allowing for the presentation of victim impact statements during the sentencing of violent attackers. To this day, Debra attends the parole hearings of the surviving members of the Manson family, ensuring they never leave prison.

Tarantino’s approach to Sharon Tate as a character in Once Upon a Time in Hollywood has elicited mixed responses. Some found it a reduction of her life while others were taken by the depiction of Tate as a normal woman going about her life. The chances are no fictionalization of her life will do her justice, if only because her short time on this planet didn’t do so either. And doesn’t that just suck?

← Will Jeremy Renner Be Ronin in 'Hawkeye' Disney+ Series? | Spoilers: Let's Talk About The Death at the End of 'Veronica Mars' Season 4 →