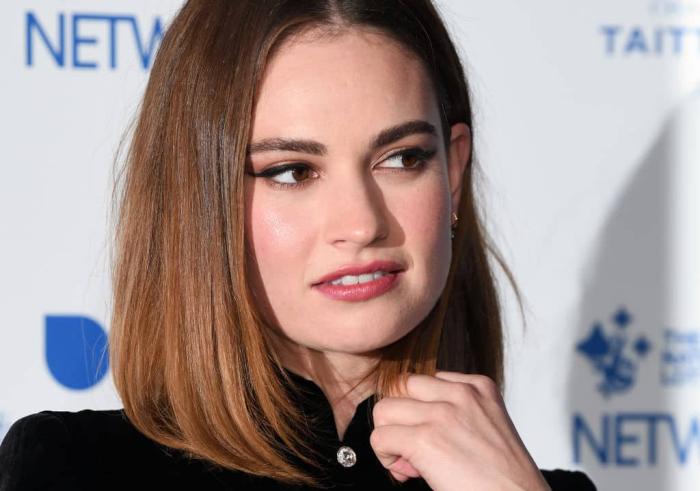 As Dominic West Torpedoes His Reputation Amid Cheating Scandal, What's Lily James Up To?

There are many options available when it comes to a celebrity or public figure being forced to deal with the fallout of a cheating scandal. You can issue an apology via your publicist or write a hackneyed response yourself and share it on social media via the Notes app on your iPhone. You can do a PR cycle tour of contrition or just ignore everything and wait for the storm to blow over. Or, if you’re Dominic West and you’ve just been caught getting cozy with your younger co-star while your wife and kids wait at home, you can pose for the cameras and share handwritten letters ensuring the press that your marriage has never been stronger. Not many people these days aside from conservative politicians caught cheating with sex workers while high on coke do this sort of public display of self-flagellation while the dutiful spouse stands to their side. It hasn’t exactly worked well for West either. If he was hoping this would put everyone’s questions to rest or paint him as some devilish rogue then he failed miserably. Nobody is buying it, not even the most sympathetic press sources. It’s a baffling moment in modern celeb gossip discourse, the likes of which we thought had been killed off by the advent of social media. Of course, it fascinated us to no end.

But what about Lily James, the woman he was caught snuggling and kissing in Rome? She’s in a much weaker position here because she’s younger, less established in the industry, will inevitably be painted as a ‘home-wrecker’, and, you know, good old-fashioned misogyny. After all, when the story initially broke, it was James’s name trending on Twitter and not West. He quickly forced the attention back onto himself with that weird stunt, but the dynamics at play here still feel horribly familiar.

James is promoting a movie right now, the Netflix remake of Rebecca, which means she has to do at least a few interviews. With social distancing still in effect, she’s mostly been doing Skype and Zoom chats and the sort of cutesy promo that Netflix has become prized for. She has, however, just canceled one of the more prominent pieces of press duties she was supposed to do this week. As reported by Page Six, James canceled her appearance on NBC’s Today following the West scandal.

She’s apparently still set to appear on The Tonight Show on Thursday, which, if it still goes forward, will probably be a typically Fallon-esque cycle of softballs and inoffensive cuteness. Not that James should be forced into some act of public shame over this. No, f**k that.

James doesn’t have the luxury to flaunt her bullsh*t in the same manner that West did. White dudes in Hollywood are hardly held to the same standards as regular human beings at the best of times. I’m not interested in seeing anyone’s careers get hurt from this. We saw how much Kristen Stewart bore the brunt of that when she was caught cheating on Robert Pattinson. Her career and public image were hugely tainted while the married father on the other end of the equation was a-OK. This is not the puritan age. I don’t need to see West or James doing teary-interviews with Jenna Bush Hager.

What interests me more is how, even in 2020, the same tired and damaging dynamics are at play here. More people are pushing back against the slut-shaming James has received but she’s still the one who’s had to basically go into hiding over this. West not only decided to commit to business as usual, but he did so with the kind of bonkers public stunt that every PR guru in the business must have been wide-eyed with bafflement at. Imagine if, after this news broke, Lily James called the press, walked out of her house looking stunning and with a mischievous grin on her face, then handed out notes telling everyone her life was great. She’d be slammed as some sort of brazen hussy and who knows the damage it would do to her blossoming career.

I’ve seen a lot of people crying foul over our responses to this story, insisting that it’s none of our business. Sure, OK, but here’s the thing: Dominic West made it our business. He’s the one who invited the world to act as voyeurs to his marriage and private issues. Lily James didn’t. I’m not absolving anyone for their infidelities here — come on, you two are both famous enough to be trailed by the press and you didn’t think this would come out?! Sloppy work — but it bears repeating how much the younger woman here is getting the shaft while the married father of five who lives in a literal castle is out there selling himself as some charming scamp.

← The Story-Teller of 'The Haunting of Bly Manor' is Doing a Terrible Job | Reddit Asks the Question: 'At What Moment Did You Realize 'Damn, I'm Old'?' →