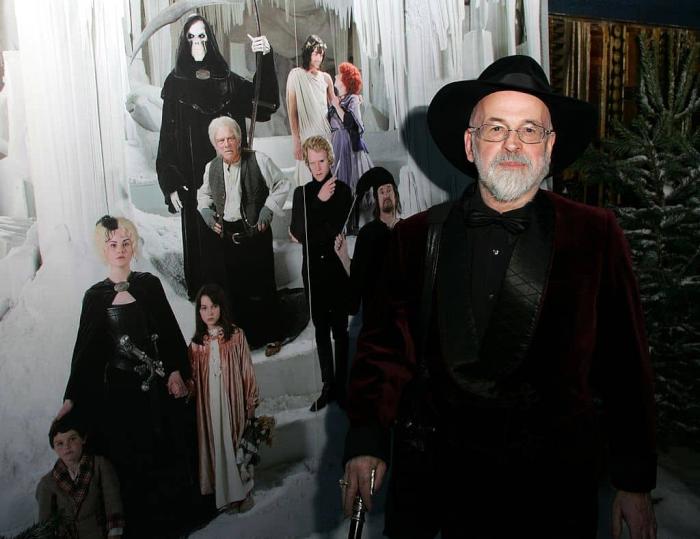 Spooky season is here and I read dishearteningly few horror things. But books are books and we should read scary stories throughout the year, as our savior Clive Barker intended it. Here are a few of my favorite reads from the past month.

I just bought this one for my Phantom collection. pic.twitter.com/3ICJVMyQ83

Yes, it’s true. I finally did it. At the ripe old age of 32, I read my first Discworld novel. Terry Pratchett’s sprawling comedy fantasy saga has long been something of a literary blind spot for me. There are just so many novels in the series, and every fan has a different recommendation of which book to start with, that it simply seemed too daunting. So, I did what I normally did when stuck in a tricky reading situation: I picked the Phantom of the Opera thing.

Yes, Maskerade is a delightfully unsubtle take on Gaston Leroux’s iconic and much-reimagined tale of an opera ghost who’s just an incel in the basement. I’m a self-confessed Phan, with an entire shelf in my living room dedicated to the many retellings of the novel that I own (yes, this includes Love Never Dies.) This ghost, the one who haunts the new owners of the Ankh-Morpork opera house, writes less eloquent threatening letters, but he’s very much Erik with more punchlines. While there are elements of character development I didn’t entirely get since, hey, that’s what happens when you start a series 18 books in, I found this a surprisingly accessible read. This is one of the witches stories and I am definitely keen to read more of their adventures because they were truly wonderful. Really, it’s just been a welcoming experience to finally delve into something that has brought such joy to many of my friends. It’s even better to totally get it! I already have another Discworld book in my growing book pile. Yes, it’s the one with the vampires. I am nothing if not totally predictable.

Parable of the Sower by Octavia Butler

I just finished reading Octavia Butler’s ‘Parable of the Sower’ and wanted to share this question posed to her in the reading guide about what she envisioned for 2024 and beyond. she was truly prophetic. so mad we didn’t listen to her when this book was first published in 1993 😩 pic.twitter.com/lzTWGDcaTz


You ever read a book that’s just a bit too prescient? I can’t say I’ve been thrilled about reading dystopian fiction in recent months for highly obvious reasons. Even I, with my love of highly depressing narratives, have my limits. But something inspired me to open up Parable of the Sower, a book that’s been on my Kindle for far too long now. It made me wonder what Butler knew that the rest of us didn’t.

Set in California of the early 2020s, 15-year-old Lauren lives in a walled off community where survival is difficult. Global warming has destroyed the planet. Water shortages are rife. Economic crises have led to unbearable inflation and smothering wealth inequality. And a new President has been elected who plans to strip away basic labor rights in favor of indentured servitude. How delightfully fantastical, right? Lauren, the daughter of a preacher who is trying to keep his community together through socialism, knows that disaster is imminent and unavoidable. She starts to write down her own ideas for a uniting faith that will lead to a brighter future, one she calls Earthseed. It may prove more powerful than she could have imagined.

It’s no surprise that Parable of the Sower has become one of the must-read dystopian novels of the past century, up there with 1984 and The Handmaid’s Tale. It’s terrifying how spot-on she was about so much but there’s also hope among the ceaseless darkness. Lauren preaches, literally, for a community-based way of life, one where resources are shared and a tight bond can withstand the harshest of intrusions. If the government won’t intervene then it’s up to the people to create something new. This is a great one for every snot-nosed loser mad about politics in sci-fi. Butler’s characterizations are tight, especially of Lauren, a teenager forced to be wise beyond her years whose stubbornness provides much-needed leadership. Overall, it’s as subtle as a brick and more interested in the ideas than the wider narrative, but hey, when you’re this right about things, you can afford to tell people to shut up and listen. Bring on the sequel.

Bet on It by Jodie Slaughter

Needed a romance for the cold nights and this one has the best dedication ever. pic.twitter.com/QYUxdMVgir

I receive the monthly romance novel subscription box from the lovely folks at the Ripped Bodice, the romance-only bookshop in California. It’s one of the true treats in my life, to get a knock on the door from the courier and see a new trove of romantic delights. Bet on It was a contemporary romance from one of these boxes, a novel I may not have otherwise picked up because bingo isn’t really my thing.

Aja Owens moved to the tight-knit town of Greenbelt, South Carolina, for a change, and to find a place that might ease her extreme anxiety issues. It’s a minor oasis, even though she’s too shy to go to any sort of social events outside of weekly bingo games with fellow players old enough to be her grandmother. Walker Abbott, however, hates Greenbelt. He left the place as soon as he could after a tough life with addict parents, and he’s only returned to help his ailing grandmother after an accident. He plans to leave as soon as she’s better. But he doesn’t expect Aja, who he is instantly smitten with. To keep things ‘simple’ between them, in the tradition of many a romance, they decide to form a bingo-related sex pact. That’ll allow them to explore the scorching chemistry they share without silly emotions getting in the way. Ha.

I must admit, I’m a sucker for the ‘sex pact gone romantic’ trope. So much drama and hotness! Bet on It certainly has its fair share of both. But the thing I appreciated the most from this novel was its exploration of mental health. Aja has anxiety issues. Walker struggles with PTSD related to his troubled childhood. They bond over shared coping mechanisms, find ways to relate to one another, but also to offer space when required. It was reassuring to see these oft-ignored but crucial conversations integrated so organically into Aja and Walker’s story. Cuteness with emotional heft = my favorite combination.

Highly recommended reading 📖 “Remarkably Bright Creatures” by Shelby Van Pelt @shelbyvanpelt. Two thumbs up from me and two paws up from Roo! pic.twitter.com/sHi7JBkTbI

Tova Sullivan is a 70-something woman who has taken a job at the Sowell Bay Aquarium to stave off boredom and grief. Keeping busy helps her to stop thinking about her late husband and the mysterious disappearance of her son, Erik, over 30 years ago. She prefers to keep to herself, especially as the perils of ageing see her considering moving from her family home and leaving behind her community. There’s nothing she likes less than meddling. Unfortunately, the curmudgeonly giant Pacific octopus living at the aquarium has taken note of her problems. And Marcellus wants to help.

There’s a certain kind of contemporary fiction that features a lot of domestic issues, grand lessons to be learned, and secrets to be revealed. Oprah’s book club was practically built on this trope, and for good reason. It’s a sturdy and relatable subgenre that typically centers the emotions and woes of older women, taking seriously that which much of literature dismisses. Remarkably Bright Creatures fits in perfectly with those novels, albeit with a magical realism twist in the form of an octopus who occasionally provides narration. Yes, we get to hear Marcellus’ thoughts, and he has many. Your enjoyment of this novel will depend entirely on how much you can suspend your disbelief over an octopus who immediately guesses the big twist and sets about trying to tell the humans about it via burglary, jailbreak, and subterfuge. These were definitely the weakest parts of the story for me, even if Marcellus’ droll observations of the world provided a chuckle or two. Expect to see this one in many a book club.


← 'The Walking Dead' Better Not Kill Off Maggie and Glenn's Son Hershel | What are the Best 'Cabinet Of Curiosities' Episodes on Netflix? →
Header Image Source: Getty Images
Most Viewed