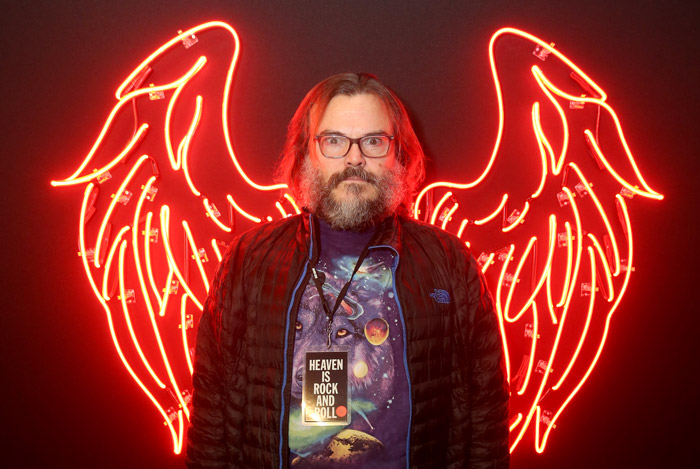 Yesterday on Twitter, Chris Pratt was trending, as was Jack Black (again). It appears the source of both was this insightful tweet.

Jack Black could replace Chris Pratt in anything that clown has ever been in.

Film fans have been noting for years how Pratt’s career began walking in the footsteps of Black, who’d made his name as a plump performer whose comedic skills were only matched by his rockstar bravado. However, Pratt went from Parks and Recreation’s Jack Black-like Andy Dwyer to misogynistic action-movie roles and homophobic ties. Yet how dare we note his aw-shucks schtick is less cute when he’s mocking voting in 2020!

Pratt problematicness aside, Black is a charisma bomb who explodes with humor, hotness, and enthusiasm whether in movies, in music, or on TikTok. So, naturally, fans began to compare.

Let me leave this here as Jack Black is trending and for those debating about who’s better between him and Chris Pratt,

Thank you for getting me into Rock&Roll 🎸🤘 #JackBlack pic.twitter.com/MMV7nNPqzN

Chris Pratt—disappointing, conservative, stopped being funny as soon as he got abs

jack black could do star lord but chris pratt could NEVER do dewey finn let’s be clear pic.twitter.com/I25lBivWXO

A number of users—as well as our own Steven Lloyd Wilson in the Pajiba Slack—declared Black would have been a superior Starlord in Guardians of the Galaxy.

STOP now i want jack black as starlord why would u pain me like this https://t.co/JGP7yhRPV3

Jack Black as Starlord would have been so much fun pic.twitter.com/3iMPJiSuJ6

Can you IMAGINE Jack Black as Starlord I would never stop watching Guardians of the Galaxy https://t.co/swgcV96Fat

Jack Black as STARLORD send me to that timeline immediately https://t.co/bJFhBRyqkz

Sadly, this won’t happen. It was not a coincidence that after watching co-stars like Chadwick Boseman, Tessa Thompson, and Brie Larson endure onslaughts of online attacks that were racist, homophobic, and misogynistic that RDJ and company FINALLY assembled to speak out because an online poll declared Chris Pratt the worst Chris. It wasn’t coincidence that days after this hubbub Disney announced Pratt would be in the next Thor movie. Disney has invested in Pratt. So, we’re stuck with this dude for at least another Phase. However, that doesn’t mean there’s no room for all the star(lord) power of Black somewhere else in the MCU.

Not only could jack Black replace Chris Pratt, he'd have been a great Wolverine don't @ me pic.twitter.com/6fTfYeftz0

It’s easy. #JackBlack as Doc Ock in the MCU. pic.twitter.com/S73Lgtgdx5

I want to see Jack Black play Wilson Fisk in the MCU.

Jack Black should totally be in the MCU as M.O.D.O.K. who insists on strumming on his acoustic guitar constantly. pic.twitter.com/BJtCRLycmF

Jack Black is trending, and I'm making it my official stance that Jack Black is a gift under-utilized by Hollywood, The Holiday is a gem because of him, and he should been put in the MCU asap.

For the sake of journalistic integrity, I will note there are those who think Jack Black has no place in the MCU and some who even called him “overrated.” I’m not posting such tweets because 1) they are few and far between, 2) I will not clutter this space with wrongness, 3) I pity these fools who clearly haven’t seen Jumanji: Welcome to the Jungle, School of Rock, The Polka King, The Holiday, The House with a Clock in Its Walls or anything involving Tenacious D.

Do you want Jack Black in the MCU? What character would you want him to play?

← So Movie Theaters Are Pretty Pissed at Warner Bros. Right Now | A MAGA Civil War Is Poised to Blow Up GOP Control of the Senate →