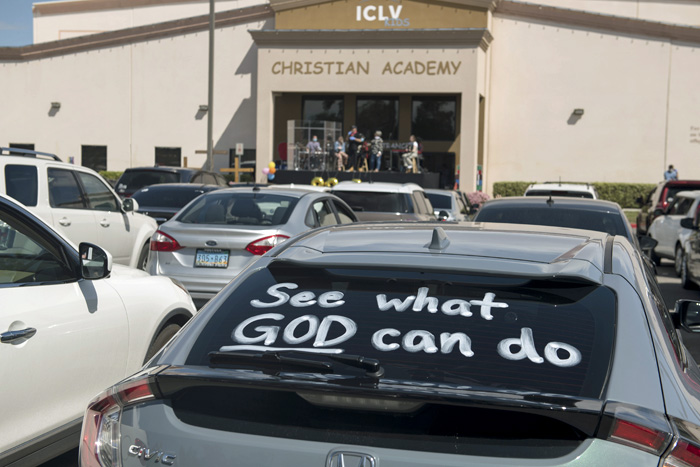 When Things Go Back to 'Normal,' Never Forget How Batsh*t Dangerous Evangelicals Acted

Since we’re going to be talking about Easter services, let’s check in on my new buddy Jonathan Shuttlesworth for what is hopefully the last time. I’m not trying to give him the Meghan McCain treatment here. — Or am I?

Anyway, if you’ve been following along, then you know that the Pittsburgh-based Shuttlesworth quickly made a name for himself after promising to throw a “Woodstock-like” gathering of evangelicals to protest the arrest of megachurch pastor Rodney Howard-Browne in Florida. But as Easter Sunday drew near, Shuttlesworth’s plans noticeably changed. For starters, his dipshit Woodstock was downgraded to a drive-in style church service almost right out of the gate because there’s a better way to stick it to lying heathen globalists by essentially agreeing that their heathen globalist lies probably are keeping everyone safe. From there, an announcement went out that specifically spelled out that “government social distancing will be strictly adhered to.” At that point, what the hell are you even doing here, man?

That wasn’t the only surprise in the announcement. What was initially touted as a full-on protest in Harrisburg to stick it to PA Governor Tom Wolf was now a small drive-in service three hours to the east in dilapidated coal country. Even weirder, neither Shuttlesworth nor the church where his “Woodstock” was being held were advertising the Easter event on their websites or social media, so it was a mystery if the thing was even happening or not.

“And when I saw him, I fell at his feet as dead. And he laid his right hand upon me, saying unto me, Fear not; I am the first and the last: I am he that liveth, and was dead; and, behold, I am alive for evermore, Amen; and have the keys of hell and of death.” pic.twitter.com/0Fw6rAnOWS

If you’re thinking that’s a lot of cars, that’s a pretty typical turnout for evangelical churches in PA on a normal Sunday let alone Easter. But in the end, Shuttlesworth’s “protest” was nothing to write home about. Like most churches across America, people ultimately chose safety over gambling on the Holy Spirit protecting them from a rabidly contagious virus. Although, maybe it didn’t hurt that their Dear Leader basically described the thing as a goddamn Bond villain.

Here's the official transcript of part of the president's remarks about how smart the coronavirus is, and also how brilliant germs are. pic.twitter.com/x1V8uOlYvy

Now, the good news is despite high levels of zealotry, the vast majority of churches are doing the right thing, and quite honestly, I’m not entirely opposed to drive-in services. Granted, while searching for a header photo, I did see lots of open windows and people talking to each other from distances that were absolutely less than six feet, but I’d still rather evangelicals do this than actually huddle into pews. Which is still happening!

The bad news is we’re quickly learning that community spread is being traced back to evangelical services, and there are still churches that are either trying to fight state governments in court or just straight-up defying them and holding live services anyway. And, of course, all of this is being encouraged by Republicans and libertarian jizz-sticks like Rand Paul who know red meat when they see it, public safety be damned.

Here’s the bottom line: I understand some religious leaders freaking out that the government is giving them orders when, theoretically, we’re supposed to have a clear separation between church and state. Although, noticeably these shift pricks toss that concept right out the window when it’s time to force women to give birth and/or make life a living hell for anyone who isn’t straight, but I digress. My point is f*cking Donald Trump, the president these nutjobs genuinely believe was CHOSEN BY GOD, is still in charge. So there’s no way any of these people should be freaking out that these social-distancing measures are any sort of permanent effort to “silence the word of Christ” or whatever. All that’s being asked of them is to sit tight until maybe June — but most likely May if we start tossing bodies into the woodchipper for the economy — and then everything will go back to normal because it’s logistically impossible to police how many people are funneling into pews on top of being a goddamn Constitutional nightmare. Thanks, Founding Fathers!

But we will remember how some of you couldn’t sit tight for a few weeks, and we will definitely let you know how much blood is on your hands because of it. You might not believe in science — although your masks and online services suggest it’s more than you let on — but the rest of the modern world does, and we will use it to call your asses out.

← 5 Shows After Dark: 'The Baker and the Beauty' Premiere ABC, 'Biography Kenny Rogers' on A&E | Less Terrifying Picks For The US 'Council to Re-Open America' Than Ivanka And The Gang →