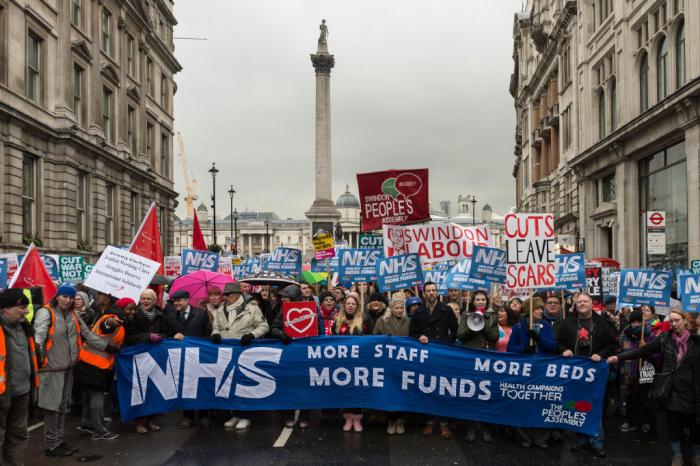 It’s a day ending in ‘y’ which means there must be a negative campaign against the NHS (National Health Service) in England’s media. Birthed in 1948 by an actual left-leaning Labour government and against vicious Tory opposition, the NHS is one of the UK’s most beloved institutions. In a largely secular country, it can at times feel like something akin to a national religion. During the height of the first waves of the Covid pandemic, people in the UK willingly undertook a nightly nationwide window/balcony clapping ritual to show their support for the NHS. The touching nature of this spectacle was somewhat undermined by the fact that it was loudly supported by a Tory government that has been eviscerating the NHS for more than a decade, deliberately underfunding it to bring it to its knees while opening up huge swathes of it to the corporate sector as part of a long term plan to privatise the nation’s healthcare.

As beloved as the NHS, it is also under siege. This isn’t a siege that began with the Tories—though their 2012 Health And Social Care Act did accelerate the move towards privatisation greatly. It was in fact Tony Blair’s centrist melt Labour government that introduced the disastrous PFIs (private finance initiatives), bringing the private sector into many elements of the UK’s public infrastructure, including the NHS. This has only accelerated under successive governments, with billions pounds worth of healthcare contracts now regularly going to private providers and GP surgeries being subsumed en masse by American for-profit healthcare interests.

Ministers of all stripes know that to attack the NHS directly is foolhardy. The public are simply too fond of it. So the attacks have to come sideways. Chronic underfunding is the main offense. This leads to catastrophic staff shortages, low morale, and a worsening of services as incredibly overworked and underpaid staff struggle to cope with ever-increasing demand. Then, the pliant organs of the mainstream media pile in and begin to lob the usual calumnies at the NHS. The propaganda machine is a well-oiled one. As my friend, doctor and activist Youssef El-Gingihy, put it:

I’m a salaried GP. Just home after a 14.5h day. we have > 40 pt contacts + referrals, results, letters, scripts, admin. Yet right wing press is dripping with anti NHS bile. NHS is broken due to marketisation & privatisation & cuts. NOT due to staff/ageing population/immigrants!

Now a new bill is being put to Parliament that will open up the NHS even further to the predatory capitalist vultures that have been circling it for decades. Prior to the general election in 2019 Jeremy Corbyn tried to warn the public that this is what would happen if the Tories came into power, but in response to this he was—in line with his overall treatment by the press and the right wing of his party—destroyed for telling the truth. Now, the Tories campaign to destroy, dismantle, and sell-off the NHS continues apace. In August, The Guardian reported that the NHS had dropped from its prestigious spot on top of the global rankings of national healthcare providers. The mainstream corporate press will seize on any weakness and will use this to further damage the NHS. This cycle will continue until the privatisation agenda is complete. The NHS is far from perfect by any means. Like most similar organs it’s affected by institutional racism, sexism, and transphobia, and many other structural prejudices. It’s not beyond reproach. Far from it. Yet as we are currently in the grip of a particularly virulent media campaign against the NHS—aimed at GP surgeries ostensibly not providing enough care to patients despite having just gone through a 15 month cycle of absolute hell while still managing to deliver services to a high standard—it’s important to provide a corrective against the propaganda bile in order to counter the agenda for that most barbarous of models, healthcare for profit.

To that end, Twitter users were sharing their best experiences of the NHS in response to a prompt by user RebeKah:

Put your hand up if you wouldn't be here but for the NHS
And if you can one-tweet the story?

I never really thought about it. But I had a simple hernia operation. Takes ten minutes. But without treatment hernias can become life threatening. So yes the NHS very likely saved my life.

I fell over and ruptured my placenta when I was 7 months pregnant. The NHS saved the life of both me and my daughter who is now 8. pic.twitter.com/pAuk5K7KrK

Friday 11th June 2021 finishing my cargobike shift 21:19. A motorbike rams me from behind. Paramedics bring me round on the tarmac. Taken to Barts trauma centre with smashed pelvis, right knee and deep head wounds. 12 weeks in the care of the NHS and now learning to walk again. pic.twitter.com/l55KmMjwC4

My daughter who was with me later went on to have major abdominal life saving surgery when she was 7 months pregnant the year after she lost twins at 2 days old we thought she was going to lose this baby too but NHS were brilliant and we have them both here , I’m so grateful

My middle daughter suffered a Stroke at 13 years old. I have no idea what the wonderful priceless paramedics or resus team did as I was too busy sobbing (I was also 6 months pregnant with my son at the time) but I know that I couldn't afford it if I was in America. pic.twitter.com/ssn4jIq4tT

Difficult birth, Dad asked whether to save me or my Mum. Cord round my neck, resuscitated. Age 9, meningitis, touch and go. Age 35 cancer, op then chemo. Age 38 peritonitis, really not good. Saved me every time. NHS thank you 🙏🙏🙏🙏

Heart attack, middle of the night, angioplasty, still here and lucky to be! There was the 2 awesome paramedics & about a dozen amazing people on call that had to get out of bed to make it happen 🙏

There was lots of great banter too.

I went deaf. After much investigation, they cut off an ear, dug out a tumor and rebuilt my middle ear using bone from my skull. Stitched my ear back on. Over six hours.

A month later they did it again on the other side. I would've been dead in my early 50s. No charge.

Sepsis. 26 days in intensive care with multiorgan failure. Then intestinal obstruction, DVT and pneumonia. Survived - all thanks to the NHS. It's not perfect but it definitely saved my life. That treatment in the private sector would have cost me over £100,000.

— The Life and Legacy of George Arthur Roberts💙 (@TheLifeandLega1) September 13, 2021

They really are amazing! So many stories to tell. I was born without any oxygen and was on life support for 3 weeks & a machine that assisted my breathing for two weeks. They gave their all. I had seizures at 8 & onset of sepsis at 14
I’ll keep fighting. I’m so lucky to be here💚

When my daughter was born 32 years ago, I had a retained placenta. Upon removal, I had a massive hemorraghe requiring a transfusion of all the blood in my body + plasma + clotting factor. In the US, I would have had my womb removed. In UK I had my son 16 months later. ❤️❤️. NHS

My daughter came down with meningococcal septicaemia aged 18mths. They thought 24hrs was all she had left, if she survived she would be severely brain damaged & deaf. I waited as 2 wks passed, tubes&wires all over.. she is now 31 and an NHS carer with no disabilities whatsoever

Someone tried to murder me - literally - and in a & e the doctor kept me alive and pain free until I got surgery. To this day I credit him with my good mental and physical recovery.

Age 7, ruptured appendix, peritonitis + septicaemia. Sickest kid in the hospital apparently. Life saving surgery. To this day I can remember the names and faces of the nurses and the surgeon. Started medical school 1991. I’m a 49 year old GP.

Not just me, but my kids too. 1 x emergency c section. And planned c section due to same complications. ❤ NHS. Let's have a wealth tax and fund it properly.

Placenta stuck after first baby - if it weren't for the NHS rushing me to hospital under a blue light and the emergency procedure, I'd've 'died in childbirth' as so many women have through history. 💙

Tumour nr operable but on an experimental drug.

My sister was called a miracle baby after her appendix burst. This was In the 1950’s and she was treated at Great Ormond Street. If it hadn’t of been for the NHS I’d never of met my big sister ❤️

Badly broken neck playing rugby aged 21… #NHS saved me, fixed my neck up, taught me to walk again and I'll be eternally grateful. If I pay tax for the rest of my life I still.wont have repaid them what I owe 😍

Dad had a valve replaced in 90s, still with us otherwise wouldn’t be.

Wife had ectopic pregnancy 7 years ago, emergency surgery saved her.

Daughter had complications at birth 4 years ago, kept alive in NICU.

Diagnosed with Cervical Cancer in 2005. 40hrs of Chemo, 25 blasts of radiotherapy and 28hrs of brachytherapy saved my life. Because of the NHS, I got to see my daughter grow up and take her to University 2 days ago. x

Daughter commented on a strange mole on my shoulder, GP appt within 1 week

Collapsed one day. Blood poured out of me.

Missing a kidney, but otherwise 100% cured.