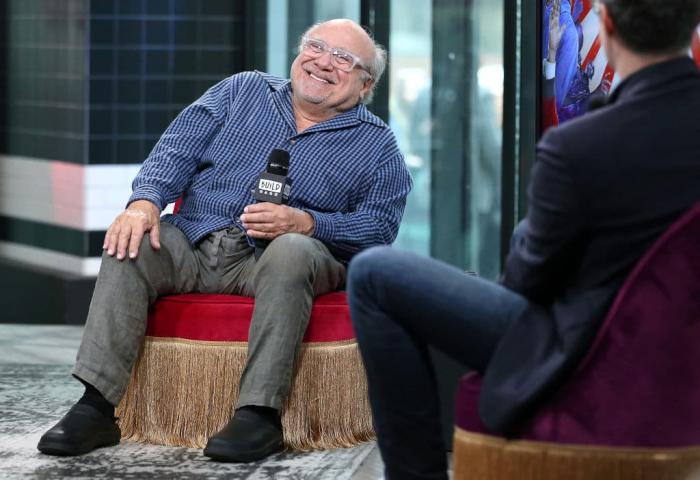 Danny DeVito is an international goddamn (gahd-daaamn) treasure. In highly polarised, fractious times, surely this is the one thing that can unify us all: Everybody likes Danny DeVito. The industry veteran is a beloved actor of screens both large and small, as well as a successful and influential director and producer, and he has been delighting audiences with his skill and personality for multiple decades now. The man’s solidly leftist for a wealthy celebrity it seems too, so even more power to him. He is also, as Kristy dubbed it when she linked to this piece in the Pajiba Slack, a ray of sunshine:

In the internet age—and especially since his debut as the filthily iconic Frank Reynolds in It’s Always Sunny in Philadelphia—DeVito has also become a much-memed presence online. The remarkable thing about DeVito and the universal affection we all seem to hold for him is that I’ve never seen him memed disparagingly. It always seems to come from a good place. On the internet, that’s a rare thing indeed, and that kind of Keanu Effect only applies to a select few (mostly male, let’s be honest) people. This was very much in evidence recently on Twitter when fantasy author Sam Sykes dropped this question:

If you could only choose one movie to be rebooted exactly the same as it was, except one role is now played by Danny DeVito, which movie and which role?
I’m thinking I want to see him play Javert in Les Miserables.

In response, the sunshine bloomed:

Cats, and he plays all of them.

Only if Jeff Goldblum now plays all the dinosaurs

First he plays Jango Fett in Attack of the Clones. Then he automatically plays all of the Clone Troopers in Revenge of the Sith. Then, 2/3 of the way through the movie… pic.twitter.com/w32L1Sm3l4

Belle in Beauty and the Beast.

Making him Pippin in LOTR

(We already got a glimpse of how glorious that would be of course in Sunny’s third season.)

to make this even more weird, the whole movie is animated except for Danny as Mike, who is just green-screened in and has his whole body shaded green with a filter

I miss read this as "every" role is now played by Danny DeVito and am now slightly disappointed.

The David Lynch version of "Dune", as Paul Atreides.

For he is the Kwisatz Haderach!https://t.co/fX5zRyJGCK

Twins. They're both Danny DeVito now.

Thor with Danny DeVito as Loki.

All the Marvel movies. He does the Stan Lee cameos.

Any of the movies with Wolverine in them.

I'll cast him as Travis Bickle in Taxi Driver. pic.twitter.com/B0JdLjtqJX

All Star Wars movies, as Yoda

William Wallace in Braveheart. In fact, replace Mel Gibson with Danny DeVito in every movie.