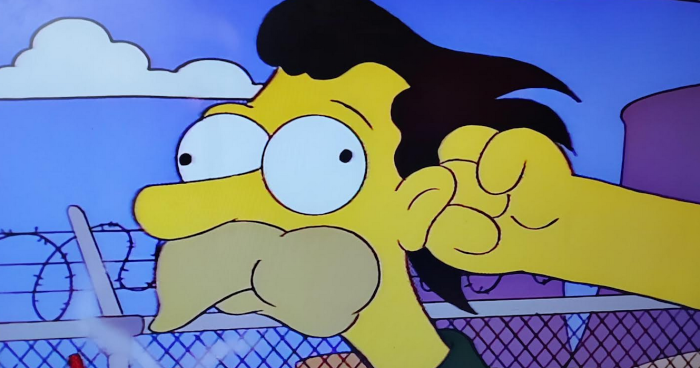 It’s no secret we’re big fans of the golden age of The Simpsons here at Pajiba. My and my generation’s entire vocabulary and collective frames of reference were shaped by five or so (or anything between nine and twelve, depending on who you ask) seasons of Matt Groening’s (and Brooks’s, Simon’s, Mirkin’s, Oakley & Weinstein’s, and Scully’s) transcendentally brilliant creation. It’s likely that we’ll never see anything of its like again. It’s entirely plausible to think that that kind of quality, a perfect synthesis of humour and cultural commentary, truly was one of its kind. Which is why I never get tired of posting golden era stuff here. It’s simply impossible to get sick of appreciating the wealth of material available in those seasons. The depth and breadth of it is insane to ponder, with just bonkers volumes of unassailable excellence jam-packed into twenty-minute episodes. To wit, a Twitter prompt that asked users to pick their choice of all-time best joke in The Simpsons. With a category as broad as that, you really could keep listing moments for far, far longer than we have space for here. Nevertheless, here is a small sliver of some of my favourites that popped up in the thread:

Gun to to your head, what is the *best* Simpsons joke? However you wanna define it; pics, GIFs, clips, and overwrought explanations welcome.

— the beacons of Manus Tirith…the beacons are lit (@ManuclearBomb) August 14, 2021

Lisa: with your reasoning I could say this rock keeps tigers away

Homer: how does it work?

Lisa: it doesnt it's just a stupid rock, but I dont see any tigers around so you?

I don't know if it's the *best* joke but I think about this one all the time pic.twitter.com/nfPg3vaRi2

As iconic as this is, I actually think the preceding scene is funnier

Homer: who wants to drive through that cactus patch?

Sideshow bob from under the car: no!

Homer: two against one! *swerves into the cacti*

I was 33 years old when I found out the phrase “you steam a good ham” was not a well-known colloquialism, it was actually just a reference to the steamed hams episode. I have been using it my entire life in every situation, including professionally.

Not the "best" joke ever, but it makes me giggle. pic.twitter.com/MeDJVkFZ5y

You mean there really is a Bart?! Good Lord!! pic.twitter.com/odwjFrsh6K

There are a lot of these that compete for title of best in my brain but I was laughing about this one for a long time the other day pic.twitter.com/j0klG47lOe

Homer gets annoyed that Burns can never remember his name even after wearing a name badge. He breaks into his office to graffiti his name onto the wall. Burns walks in and says, “Who the devil are you?” Homer just loses it 😂 pic.twitter.com/vaDNsFahgp

Honestly, the scene when Stampy is heading straight for the peanut factory and the foreman losing it is one of the funniest moments in television history.

"THIS IS THE MOMENT WE'VE FEARED, PEOPLE. MANY OF YOU THOUGHT IT WOULDN'T HAPPEN!"https://t.co/Ycf7TNJfEe

can never pick just one but: this is an example of another great gag delivered by a character who was only invented for the purpose of a single joke (the ‘Disco Stu’ jacket). Followed up immediately by the reveal of the dead fish in his platform heels. pic.twitter.com/amxjZpQ9OF

I saw this the other day and only just understood it. pic.twitter.com/YEKnuI7ETB

I haven't watched the Simpsons in darn near ~18 years, but there are several scenes that are forever seared into my mind, including this one: pic.twitter.com/1JaUvvsMap

B-Sharps episode. Barney and Yoko Ono are together. They are at Moe's bar and order drinks, a beer for Barney and, well… something else for Yoko. Moe has one under the bar as if someone had ordered it earlier but changed their mind. https://t.co/1DrT1bLBQq

This whole episode is packed with hilarious one-liners but this is the one quote to rule them all pic.twitter.com/XZqUqw1hNc

"I'm going to teach some kids a lesson."

"I'm choosing to take that literally!"

For me, it’s a run of jokes, perhaps the best combo on the series: Marge starts it off by saying it was the thirteenth day of the thirteenth month and they were there to talk about the misprinted calendars, which leads to Homer complaining about lousy Smarch weather and then: pic.twitter.com/eAAfNawtdu

There are SO many but this newspaper headline always makes me howl as well as Homer thinking ballet is a bear in a little car, "that's a paddlin'" (pretty much everything Jasper says TBF), Mr Burns releasing the flying monkeys, "Homer sleeps nude in an oxygen tent"… pic.twitter.com/o7vOdgZ5Uv

— the beacons of Manus Tirith…the beacons are lit (@ManuclearBomb) August 14, 2021

Well for me it simply has to be Homer's deadpan scream at the 'lumbering dinosaur' question by Kent Brockman. https://t.co/8BLiPYVvGW

It may not be the Best, but it's the one I think of most often 🙄
(well, this & Homer panicking "Where's the ANY key?!") pic.twitter.com/KQnx5Qdimy

honourable mention for this phone gag too pic.twitter.com/tzFqrDnogH

"Terror at 5 1/2 Feet"
Someone, probably Nelson, lit two flares and stuck them in Martin's pants. Bart wanted to throw them at the gremlin outside the bus, so he grabbed the flares, hesitated, and stuck one back in Martin's pants. Just a little throwaway joke but it made me LMAO pic.twitter.com/osZG7MYsHR

The sheer absurdity of Handsome Pete’s existence dancing for nickels makes me laugh more than anything, and “Not a quarter! He’ll be dancing for hours!” is one of my favourite jokes. pic.twitter.com/Qr8HyWl1xX

I could not breath the first time I saw this. It utterly destroyed me. pic.twitter.com/INrGwE2GeX

The whole “Hello, Alphonse!” sequence SLAYS me even after seeing it 100 times. I was wheezing with laughter just pulling this shot from Frinkiac pic.twitter.com/WVlcS1B75H

Followed by Marge's line about the crutches and Homer smashing another car while en route to the trampoline assuming they were also en route to said trampoline.
3 killer jokes in about 15 seconds of TV.

The clown college opening sequence ("new billboard day!" thru "i don't think any of us expected him to say that") is up there to me. It's the quintessential prime era Simpsons chain reaction joke that just keeps getting funnier. https://t.co/GeOGh7Hf1X

Everything about this, the noise Homer makes, the exasperated "Okay" from Ned, the perfect jump Ned does… Fantastic pic.twitter.com/wNRsv76ueN

← How Does the 'Official 'Ted Lasso' Biscuit Recipe' Stack Up? | Stream It or Nah: Netflix's Latest Harlan Coben Series, 'Gone for Good' →